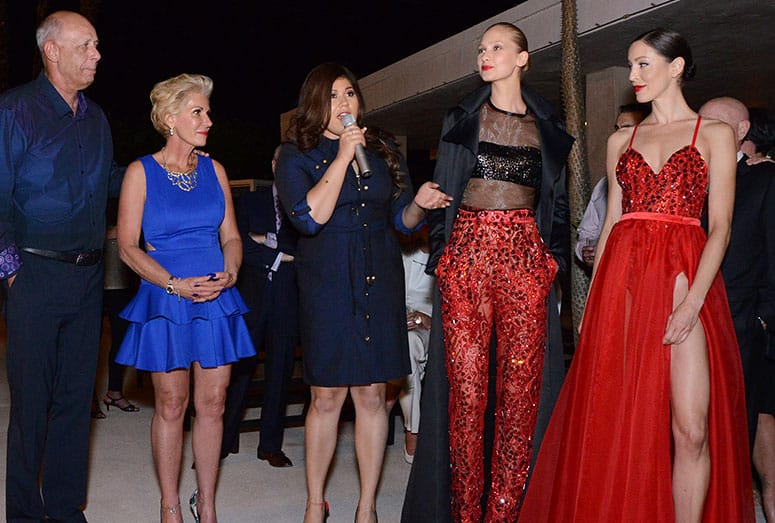 The Hills have been sponsors of the FIDM/Fashion Institute of Design and Merchandising’s Debut show during Fashion Week El Paseo for the last four years. Over the same period of time, the couple have been the benefactors of a $10,000 scholarship given to a Debut student.

Fashion Week’ El Paseo’s FIDM show presents the school’s 10 hand-selected members of the Debut graduating class in a runway show of their couture collections. Each of the designers show 10 looks that demonstrate their skills, aesthetics, and talents as leading-edge designers ready to take on the fashion world.

Hors D’oeuvres and cocktails were served to more than 40 divas as the group reunited with conversation regarding their excitement about Fashion Week. Michael Mathews, director of community relations and events for Palm Springs Life, welcomed the guests and Susan Stein, fashion editor, gave the audience a quick rundown of the programs that were planned for the runway, including designers and charity events.

The highlight of the evening was the introduction of Alexandra Parel, Debut graduate of FIDM and recipient of the Hill’s Scholarship for 2016. Alexandra’s models premiered 6 looks from her 12-piece collection that will be shown on the runway during Fashion Week.

Informal modeling featured her elegant hand-beaded embellishments of tulle and silk that included an updated version of the tuxedo as well as a bouffant tulle skirt with corset that was both elegant and fit for a fairy tale fantasy.

Parel designs wearable art for the modern woman, relying on her background as a sculptor and fine artist and incorporating “free-hand” draping into many of her silhouettes. Her modern collection juxtaposes crisp and clean with ornate and intricate. She’s interested in a future of fashion illustration and Hollywood costume design.

Parel also presented the Hills with one of her original sketches used in creating this collection that was centrally featured in the Hill’s entrance foyer so that each guest could see the inspiration for Parel’s designs. Alexandra also remarked, “This evening would not have been possible without the help of the Hill’s generous scholarship.”