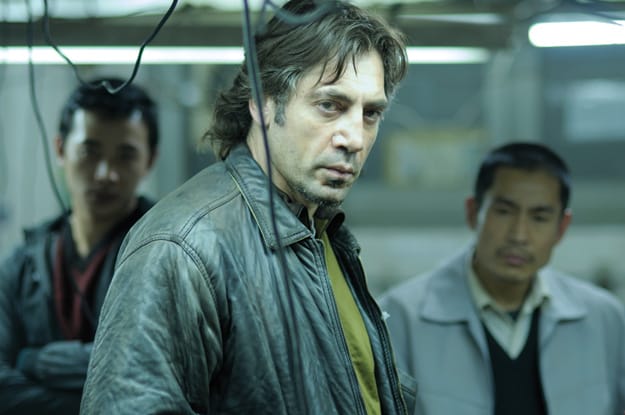 The conversation stutters and restarts, words bouncing around in the phone ether. It is 3 a.m. in the south of Spain, where Javier Bardem is visiting friends. Household noises echo faintly in the background, but distinct sounds are difficult to make out over the hiss of international long distance. “Can you hear me?” he asks at one point. The line fades in and out, but Bardem takes it in stride, remaining gracious and unperturbed by technical difficulties.

The actor is everywhere lately — Cannes, London, Toronto — and has just left Madrid after marching in a demonstration about Western Sahara, a former Spanish colony. “There were 100,000 people there trying to bring attention to something that is going on in Sahara,” he says, “and the denial of some governments — including the United States, France, and Spain — of the repression Morocco is doing in Sahara.”

“I’m very surprised,” he says of the honor. “It’s something that I feel very grateful for, and I never feel that I deserve any distinction. But also,” he adds, with a hint of humor, “I’m fine with having it.”

The desert left a lasting impression on Bardem, 41, and he looks forward to his visit. “I’ve been in Palm Springs several times during the years,” he says. “I remember the first time was in 2000, with Before Night Falls, and I loved the reception of the movie there. The theater was packed with people, and the response to the movie was huge in a very emotional way. It was one of the first occasions that I was accompanying [director Julian Schnabel] in showing the movie, and I felt very touched by the response in Palm Springs.”

If his schedule permits, Bardem wants to spend some down time at the festival. “I would love that. I hope to enjoy myself being there and be relaxed enough to enjoy it, which is not easy sometimes — not easy ever,” he says.

Biutiful, Bardem’s new film, screens in the festival’s Awards Buzz category. He hopes to attend the premiere, but don’t count on him to sit still for his own movie. “No, no, no, no, no, I won’t watch the film. I will not,” he emphasizes. “I’m always saying that the need to perform has nothing to do with the need for watching the performance,” he explains. “You want to check it out the first time or the first two times to see how wrong you did it, then you need to let it go.”

For film critics and fans, however, Bardem rarely, if ever, gets it wrong. He won best actor honors at the Cannes Film Festival for his wrenching portrayal of Uxbal in Biutiful, and another Oscar nod seems likely. Along with his 2008 Academy Award for No Country for Old Men, he took home Golden Globe, Screen Actors Guild, and BAFTA awards. In 2000, he was nominated for an Oscar and Golden Globe for his role as Cuban poet Reinaldo Arenas in Before Night Falls, winning a slew of inter-national honors. He’s been nominated for Spain’s Goya Award seven times, earning it four times.

“I can be that, and I can be the opposite,” Bardem responds after a long pause. Each film requires a different approach, he ex-plains, but “the bottom line is the same, which is to try to be as honest as you can be.”

While many of the roles he chooses examine darker material (No Country’s sinister Anton Chigurh, for instance), Bardem points out his recent turn in Eat Pray Love as an example of his lighter side. In fact, he is a Gleek: a fan of the television series Glee. He might even pop up on a future episode.

“When I did Eat Pray Love, I went to Ryan [Murphy, the film’s director and Glee creator] and said I would like to appear on it, and he said he would think about it. And then, apparently, he said it somewhere that I will. I talked to him afterward and said that I would like to, of course, but that’s all I know. At this very moment, I’m not appearing in Glee because I haven’t heard anything. But as long as Ryan wants me to do it, and it’s a good thing to do, I’ll do it,” Bardem says.

“All those [Glee] actors and actresses are amazing, because beyond being so good, they sing amazingly well,” he adds. But he laughs about his own musical gifts. “I said to Ryan that I only sing when I’m in the shower. We were talking theoretically about me doing a heavy metal rock star from Spain, so I will be allowed to scream onstage.”

Biutiful, on the other hand, was another trip to the darker side for Bardem. The film’s website calls it “a love story between a father and his children; the journey of Uxbal, a conflicted man who struggles to reconcile fatherhood, love, spirituality, crime, guilt, and mortality amidst the dangerous underworld of modern Barcelona.” It is, Bardem explains, one man’s journey and every man’s journey.

“I think it relates to the ancient times of the Greek plays. It’s about human nature seen from above. In this case, there are no gods like in those Greek tragedies to remind human beings to be stronger and wiser about death itself. Facing death is the story of man,” he says.

The transformation was tough personally and professionally, Bardem says. Partitioning reality from the character was an on-going battle. “Some days you feel you can; some days you feel you cannot. It’s part of a journey. You are holding an emotional state, like Biutiful, for eight months. It’s very difficult to come to a point where you understand what is reality and what is fiction. But I guess that’s the trade: to convey something that is reality and fiction and create the link between the two of them.”

Bardem — who is expecting his first child with his wife, Oscar-winning actress Penélope Cruz — sees the character’s singular dedication to his children as just one part of a larger quest.

“Uxbal was not only a father, but a person who has to deal with three different journeys: the inside, where he has to embrace the idea of mortality, which is not easy for anyone; the physical one — the outside — including his family, his children, and the world he has created; and the spiritual, as one who has the gift of communicating with the dead to deal with. In those three journeys, he really understands the most important thing is the legacy to those two kids. But beyond feeding them with bread and milk, they need to be fed with something as important, which is their spiritual life, ethical values, and emotional legacy.”

Biutiful (named for a spelling mistake Uxbal’s daughter makes on a drawing) is bleak at times, but Bardem feels it ultimately conveys a positive message.

“I think Biutiful is a very powerful movie,” he says. “It has a great reward at the end for the viewer, which is to feel comfortable in one’s own skin and also more aware of the importance of having someone close to you and having someone that understands you and how important it is to feel loved by the people you love.

“From the reaction of people who have seen it, I know what they will take away from it — the need to run to the people they love and hug them and to strengthen their love for those around them. And I ask myself, ‘Isn’t that a lot for a movie?’”