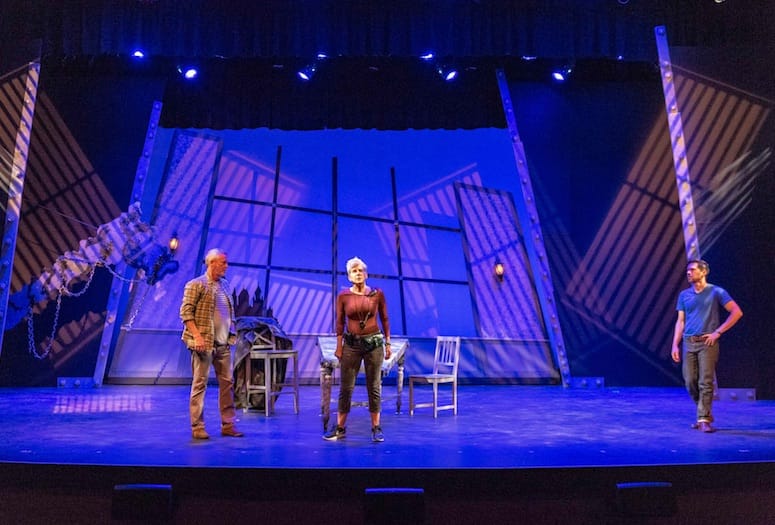 David Youse, Robin McAlpine, and Alex Best portray three well-formed characters seem worlds away from one another when the story begins.
PHOTOGRAPHS BY DAVID A. LEE

While three unhappy people rehearsing a Franz Kafka play seems an odd premise for a comedy, it’s actually a bit of genius. The Understudy, by Theresa Rebeck, is, among other things, a smart, biting, and poignant commentary on our culture’s obsession with celebrity and the degradation many believe it has dealt to “legitimate theater.”

The setting is a Broadway production of a newly discovered work by Franz Kafka. Struggling actor Harry has been hired as an understudy to the play’s second lead, a up-and-coming action film star who is understudying the play’s star, an even bigger action film star. The stage manager is Roxanne, a frustrated former actress who gives her all to her job even though she not-so-secretly feels it’s beneath her. To make matters worse, Harry is her former fiancé. To make matters worse still, Harry is not much of a team player — and neither is the unseen but clearly stoned lightboard operator, who can’t seem to keep her light, set, and sound cues straight.

Plays about plays can be tricky as it’s sometimes difficult to navigate the various levels of reality. This is not the case here. While most of the action takes place on a Broadway stage, producer-director Chuck Yates’ inventive staging makes the auditorium a set piece as well. Tom Valach’s set design, meanwhile, is simple but entirely effective. The action begins and ends on a virtually empty stage, but throughout the show various set pieces make their entrances and exits, oftentimes hilariously. Moira Wilke-Whitaker’s light design is nearly a character in itself; it, too, provides plenty of comic relief.

David Youse makes Harry endearing by offering up the perfect combination of humor and pitifulness. He’s a screw-up, and way too bitter for his own good, but you genuinely feel for him. Here is a trained actor reduced to standing by for talentless pretty boy. An actor of lesser stature could easily have made Harry a caricature, but Youse gives him the respect he — Harry — believes he deserves. 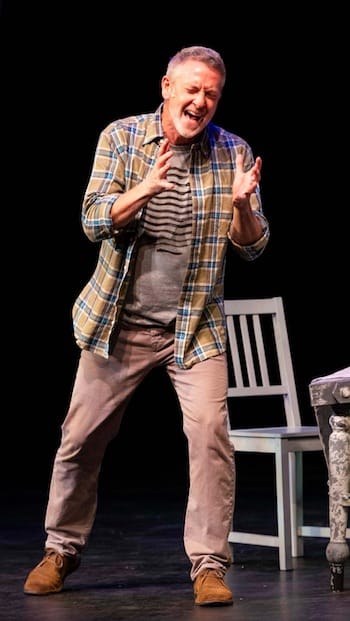 David Youse makes Harry endearing by offering up the perfect combination of humor and pitifulness.

As Roxanne, Robin McAlpine is a revelation. In a brilliant, multi-layered performance — the sort for which hyperbole was invented — she drives the show the same way her stage manager character drives the rehearsal they’re desperately trying to get through. She can make you laugh despite her broken heart, her frustration, and her acquiescence. Her pain becomes your pain.

Alex Best delivers as entitled budding action film star Jake, who strives to legitimize himself by appearing on Broadway. In the beginning he’s as full of himself as he is ambitious. After all, his recent film enjoyed a $67 million opening weekend. But by the play’s end, he’s learned some hard truths, and the character’s journey is well documented by Best’s insightful performance.

The three well-formed characters seem worlds away from one another when the story begins. When it ends, they’ve found a common ground. To get there convincingly is not an easy task. It requires adroit writing, which Rebeck delivers in abundance. Each of the three has his/her chance to be the alpha as the power shifts among them. While certain conceits are a bit difficult to digest — the fact that no one seems able to remember the stage mics are open, which means everything said on stage can also be heard off or the notion of an action film star working as an understudy to an even bigger action film star — the show packs a powerful punch overall and is highly recommended.

The Understudy runs through Nov. 11 at the Palm Springs Art Museum’s Annenberg Theater. For tickets, call 760-325-4490 or visit annenbergtheater.org.