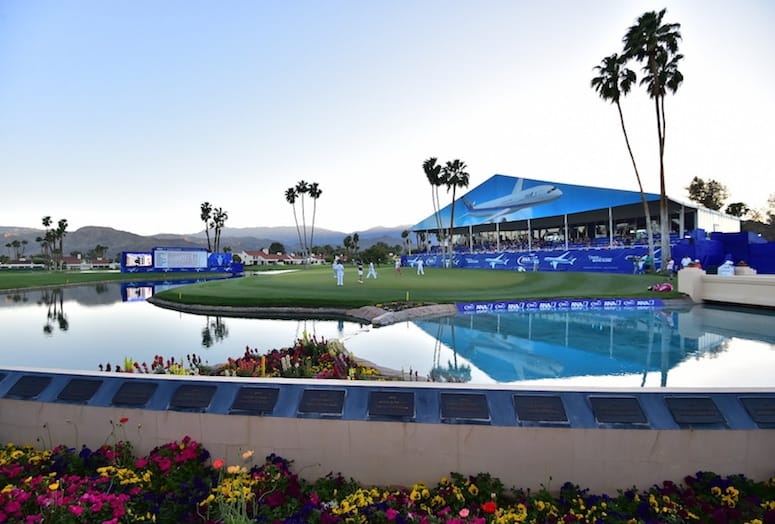 The 18th green is the site of the legendary Poppy's Pond, where the winner of the ANA Inspiration takes a celebratory leap into the water.
PHOTOGRAPHS COURTESY ANA INSPIRATION

It’s ladies first, when it comes to the professional golf tours’ most prestigious 2018 championships – aka, the “Majors”. A week before the men gather at Augusta National for the Masters, the world’s best women golfers will tee it up March 28 at the 47th annual ANA Inspiration on the Dinah Shore Tournament Course at Mission Hills Country Club in Rancho Mirage.

Past winners Lydia Ko, Brittany Lincicome, Lexi Thompson and Stacy Lewis, along with last year’s breakout amateur star Lucy Li, will join defending champion So Yeon Ryu, in hopes of carrying on what Kevin Hopkins, executive director of the ANA, proudly hails as “one of the happiest traditions in all of sport” – the victor’s leap into Poppie’s Pond, the now-legendary body of water that surrounds the ANA’s finishing green.

Hopkins says this year marks a number of significant milestones in the storied history of the crowd-pleasing leap. Most notably, it’s the 30th anniversary of the inaugural — Amy Alcott’s spontaneous, what-in-the-world-is-she-doing decision to celebrate her 1988 ANA win by joining caddie Bill Kurre – whom she encouraged to “let it rip” – with an uninhibited plunge into the shallow depths. It’s also the 20th anniversary of Pat Hurst’s unique Non-Leap Leap: unable to swim, Hurst waded, all the way up to her ankles, into the pond.

While fans will focus on Poppie’s Pond as the ANA draws to its conclusion late on Sunday afternoon, tournament week gets underway March 27 with an event that looks beyond the fairways — the third annual ANA Inspiring Women in Sports Conference returns. The conference showcases successsful female athletes speaking on issues relating to women in sports, and in the world.

Having appreciated the way the new team in charge of the CareerBuilder Challenge enhanced the “fan experience” in La Quinta this year, Hopkins thinks the ANA gives its attendees a number of first-rate reasons to head to the Dinah Shore course. 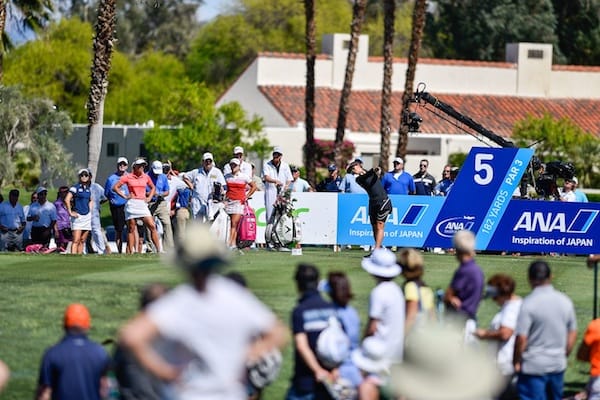 One of these extras is the LPGA Lesson Zone. For a couple of hours each day of the tournament, LPGA teaching and club professionals will be on hand on the driving range, after the last of the professionals is on the course, to give free lessons. It could be just the setting for a breakthrough if you’ve ever watched the pros, you know that their swings, from set-up to follow-through, have a way of creating an irresistible urge to grab a club and swing like that.

The ANA’s cuisine should also be a draw, says Hopkins. Wallys Desert Turtle, one of the Coachella Valley’s most popular destination eateries, “has really stepped up the menus” at the food stations throughout the grounds and in the 18th green suites.

The many ticket packages run the gamut of possibilities and should meet any need, ranging from the $30 individual “Anyday Grounds” ticket to the “Clubhouse Weekly,” which, at $1,249, provides a foursome with just about every opportunity – other than actually teeing it up themselves – to enjoy the tournament in style.

Fans can grab some great vantage points to watch the tournament, and indulge in some experential activities and food.