Roger Federer is the Best Everer 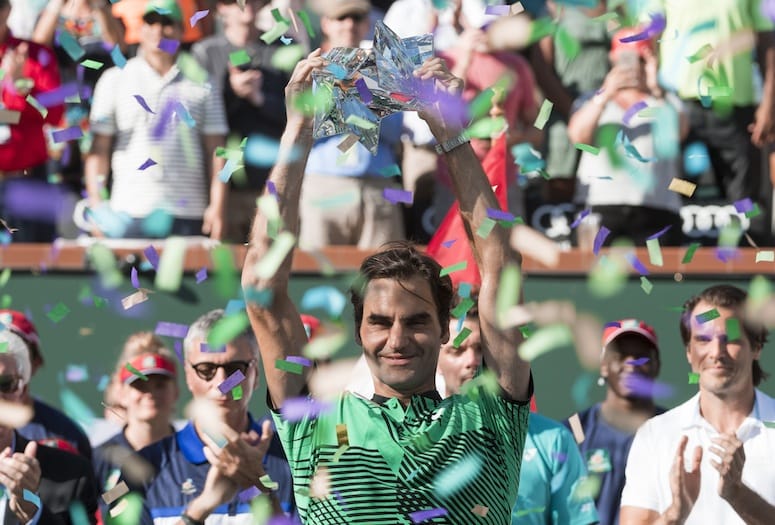 Roger Federer holds the symbol of winning the BNP Paribas Open for the first time since 2012.
PHOTOS BY RAY GIUBILO/MIKE FREY

You run out of things to write about Roger Federer. Adjectives get re-used. Superlatives become blasé. You try to keep some semblance of perspective about the closest thing to perfection that has ever gripped a tennis racket, and you still end up slobbering all over yourself.

So, we will leave today’s lead paragraph, in best summary of Federer’s 6-4, 7-5 victory and men’s title at the BNP Paribas Open Sunday, to the woman four rows up, near center court, at the sold-out Indian Wells Tennis Garden. She held up a sign that cut through all the mush:

The 35-year-old, who claims to be from Switzerland but is really from Mars, beat his countryman, Stan Wawrinka in the final. Most sports events test for drugs after performances such as Federer’s. Here, with Federer, they need to bring in guys from NASA and test for bionics.

The scores in Sunday’s final may appear to be close, but in reality, Wawrinka had about as much chance as your 16-year-old at the used-car salesman’s desk. 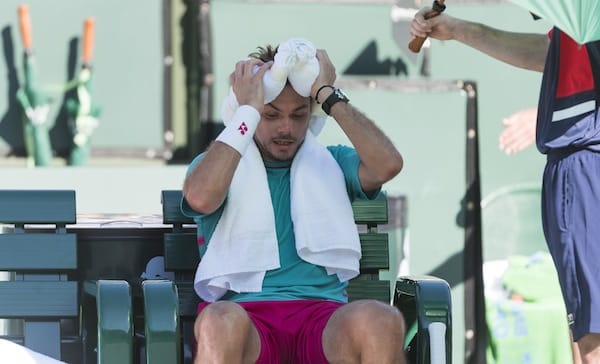 Stan Wawrinka is feeling the heat and the intensity of Roger Federer’s game in the March 19 BNP Paribas Open finals.

He did break Federer’s serve once, the first time that had happened here this year. But Federer broke back three games later to even things in the second set. Federer had already won an artful point to break Wawrinka at 4-5 of the first set, and he would do the same later, after getting back on serve.

Match point was Wawrinka serving at 5-6, Federer attacking, Wawrinka staying way back from the baseline. To finish, Federer painted one of his Picasso points. He sent Wawrinka running wide to his forehand side for such a severely angled shot that the only answer was a floating response. Federer, expecting that, closed like a cat burgler and volleyed Wawrinka’s offering into the far backhand corner.

For Wawrinka, both that shot and his opponent were untouchable. To his credit, he knew that. He entered with a 3-19 record against Federer and 0-14 on hard courts.

“The way he is playing is just so beautiful,” Wawrinka said afterward. “Everything looks perfect. He’s moving amazingly well. He has amazing touch. He’s doing everything you can do on a tennis court.”

For those who have not been following this closely, Federer, the man with the most major titles in history (18), was not expected to be where he is at this stage of the tennis season. He missed six months of last year with a knee injury, hadn’t won a major since Wimbledon in 2012, and gathered his team around him in December to plan an orderly and realistic comeback attempt.

“We knew if I lost early at the Australian,” he said, “that my ranking could drop to No. 35. The goal was to be top 8 after Wimbledon.”

So much for that comeback plan.

He actually appears to be playing better, moving better and being more aggressive than in those years, between 2004 and 2009, when he almost never lost and was almost always No. 1.

The image matches the performances between the lines of a tennis court. He is cool, calm and collected. He is handsome, debonair. He dresses off the court like a guy who ought to be doing that for a living. His sense of humor comes easily, and he is comfortable with being self-effacing.

He, tournament director Tommy Haas, and fellow player Grigor Dmitrov did a little musical number to entertain the fans the night Nick Kyrgios took ill and defaulted to him. It was orchestrated by the ultimate Hollywood musical guru, Haas’ father-in-law, David Foster. Several reports said they actually weren’t bad.

Sunday, in his press conference, Federer joked with the media that, with the singing group going now, he had some tough decisions ahead as to which career to focus on.

Now, he heads off to Miami, for the second straight Masters Series event, a tournament where humidity and windy conditions make it a different kind of challenge. There will be much written about him around the world, in advance of that. But, despite all that could happen there, the message from the fan in the 4th row in the Indian Wells stands remains the current doctrine in the sport.