If you drive east on Highway 62 about a mile past Park Boulevard in “downtown” Joshua Tree, you’ll come to a freestanding cabin on the right side of the road with nothing around it except a bright yellow van and a weathered sign advertising 24-hour bail bond service. It’s at the corner of Neptune Avenue, and if you turn right up the dirt road and take the first dusty left, you’ll encounter Planar Pavilions, 10 modular structures made of matte black cinder blocks sprawling across as many raw desert acres between the highway and Andrea Zittel’s home and studio.

A mountain of boulders separates the southern edge of the artist’s property, known as A–Z West, from Joshua Tree National Park. On her side, modest-size houses dot the landscape, many situated on 5-acre plots created in the wake of the Small Tract Act of 1939, which started a homestead movement in the California desert. Eighty years later, the area remains sparsely populated, although thicker traffic on the highway reflects the resurgent interest in visitation and homeownership here.

During a February conversation with Zittel at the Palm Springs Art Museum, artist Ed Ruscha, who owns large swaths of land in this part of the Mojave, rolled his eyes when asked whether the High Desert could flip from rural to suburban. “I hope not,” he deadpanned. 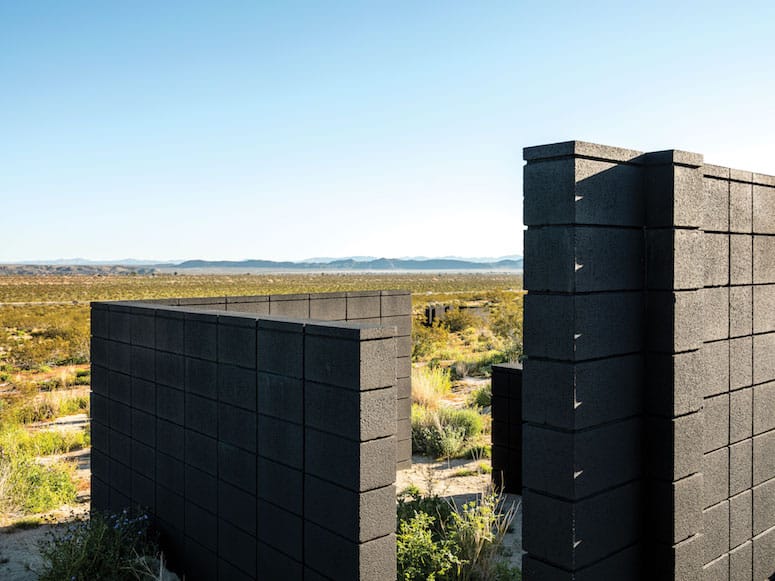 The structures appear as ruins but also suggest development in a state of either progress or abandonment.

In that regard, Zittel explains, Planar Pavilions “evoke ancient ruins, structures in a state of unfinished construction,” or an interstitial zone, neither fully domesticated nor wild.

The installation, completed in 2017, unfolds in different configurations of vertical planes that serve as walls and divisions, but, as Zittel says, also “provide shelter and protection. They are abstract, but at the same time they offer functional possibilities.”

The appearance of the large-scale sculptures, and their shadows, continually changes with the position of the sun.

“I grew up in Southern California,” she says. “My grandparents had a ranch in the Imperial Valley, and I remember how they sort of lived in their own world and did everything for themselves. A lot of what I remember from my childhood is in my [art] practice today.”

Zittel, who earned her bachelor’s degree at San Diego State University and MFA at Rhode Island School of Design, established A–Z East in 1994 in a Brooklyn row house and became a fixture on the New York art scene. Ultimately, she told the museum audience, “I wanted to live in a community that was outside of the art world.” 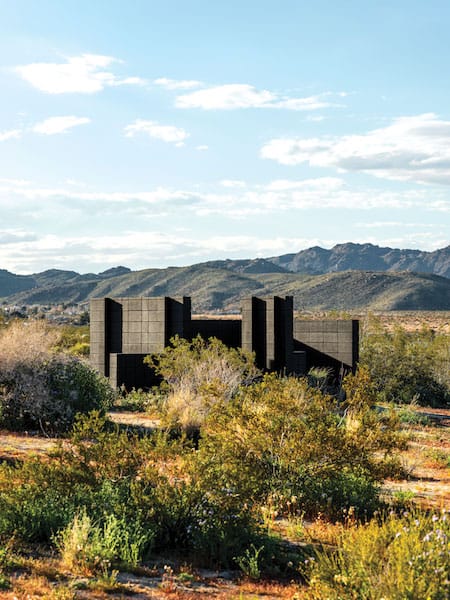 Planar Pavilions fits neatly into Andrea Zittel’s “life practice”: She reimagines the systems and structures in which we live and suggests that certain parameters and limitations actually provide a measure of liberation.

She moved to the desert in 2000 to find people who share her interests. “Everyone here comes from somewhere else.” She co-founded the nonprofit High Desert Test Sites in 2002 as a platform to invite other artists to experiment and interact around the ideas of environmentalism and self-sufficiency.

Planar Pavilions, which Zittel has donated to HDTS as a permanent installation, fits neatly into the artist’s “life practice”: She reimagines the systems and structures in which we live and suggests that certain parameters and limitations actually provide a measure of liberation.

Her work at A–Z West, where she has created modular living units, uniforms, and a Wagon Stations (sleeping pods) encampment, blurs the lines between art, architecture, and design. She worked on Planar Pavilions in lockstep with her Planar Configurations series of Mondrianesque sculptures that turn the focus of her ideas to interior spaces, suggesting a functional use as furniture, as well as a body of weavings, watercolors, and gouaches on paper that read as studies or representations of the three-dimensional forms. Regen Projects in Los Angeles exhibited these works.

You can see Planar Pavilions from sunrise to sunset. Park in the turnout along the right side of the dirt road, and tread carefully as you walk toward the structures to avoid damaging the land and surrounding vegetation. Zittel periodically opens her studio and residence for tours but otherwise prohibits the public from entering this part of A–Z West. zittel.org 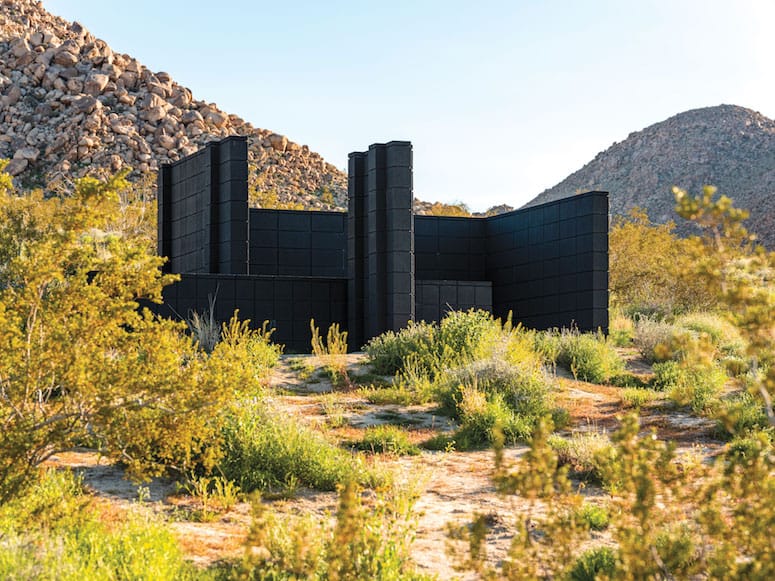