Andy Samberg Comedy "Palm Springs" Was Not Shot There 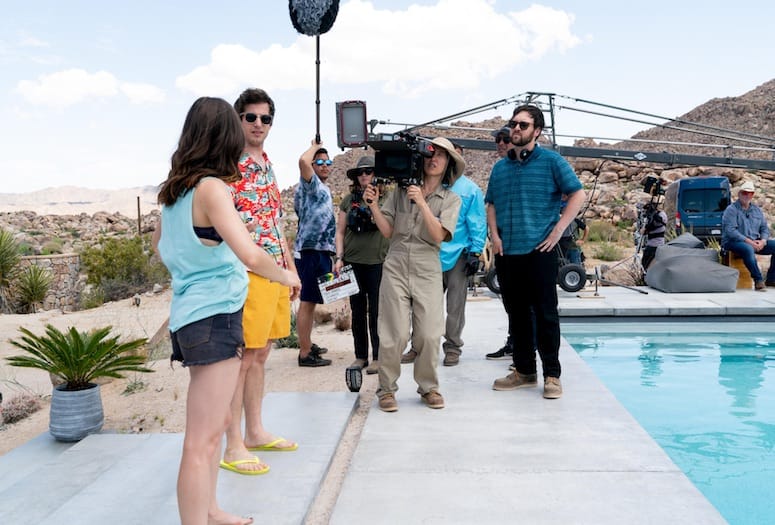 While the backdrop may look like Palm Springs, Andy Samberg's new film by the same name wasn't shot in the Coachella Valley.
PHOTOGRAPHS COURTESY NEON/HULU

Not a single frame of the upcoming movie Palm Springs was actually filmed in Palm Springs. However, a trip to the city by director Max Barbakow and screenwriter Andy Siara — and lots and lots of desert weddings — supremely influenced the surreal comedy starring Saturday Night Live and Brooklyn Nine-Nine star Andy Samberg.

Los Angeles-based filmmakers Barbakow and Siara began collaborating on the project after working on their thesis film together and graduating from the American Film Institute in 2015. The idea for Palm Springs was born over a weekend jaunt where Barbakow and Siara stayed at the Ace Hotel & Swim Club, gambled at the Agua Caliente Casino, and sipped cocktails at Bootlegger Tiki. The project eventually gained traction when the pair joined forces with The Lonely Island, the comedy trio fronted by Samberg.

“We always knew we wanted to set the movie in and around Palm Springs,” says Siara, who originally hails from Orange County. “My aunt had a condo out there. I’ve been going out there and to Joshua Tree as long as I can remember. There was a brief period where we toyed around with calling the movie something else, but once we started working with The Lonely Island guys, it was Palm Springs.”

• READ NEXT: Where to Get Your Coachella Valley Culture Fix.

The film stars Samberg and How I Met Your Mother actress Cristin Milioti as a pair of wedding guests trapped in a Groundhog Day-esque time loop. (“This is today. Today is yesterday. And tomorrow is also today,” Samberg’s character explains in the film.) Siara says he couldn’t have envisioned centering the film’s metaphysical loopiness anywhere else but the desert. “It has a magical quality,” Siara says, “that’s hard to describe.”

Palm Springs was filmed over 21 days in 2019 with Santa Clarita, Palmdale, and other California locales standing in for the Coachella Valley and beyond. 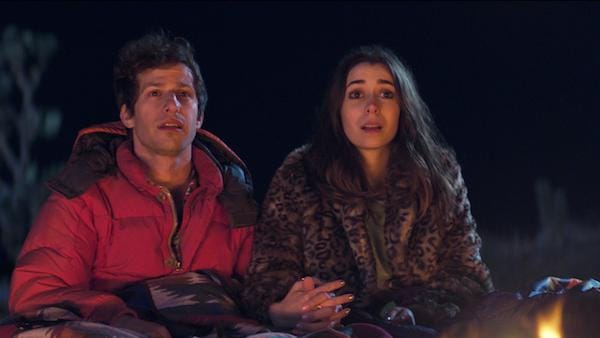 When carefree Nyles (Andy Samberg) and reluctant maid of honor Sarah (Cristin Milioti) have a chance encounter at a Palm Springs wedding, things get complicated when they find themselves unable to escape the venue, themselves, or each other.

The independent flick, set for release July 10 on the Hulu streaming service, was originally intended to be filmed in and around the Palm Springs area. (The closest they shot was Joshua Tree.) Barbakow acknowledges those plans fell apart over scheduling and budget concerns.

“Early on, we had this whole sequence,” he explains, “where the main characters went into town and did all the things we did on our Palm Springs weekend. But, as it goes with a film this size, we weren’t able to make it happen.”

Siara and Barbakow, who grew up in the Santa Barbara area, have a long history of escaping to Greater Palm Springs for weekend getaways, assorted weddings, and Coachellas. Siara even married his wife, Amanda, at the Cree Estate in Cathedral City.

“As I moved into my late 20s and all my friends started getting married, I could always bet on their weddings being in either Palm Springs or Ojai,” Siara says. “I think about 75 percent of the weddings I’ve attended in my life have been in the Palm Springs area, including my own.”

Palm Springs will be released on Hulu starting July 10.

The film, which marks the duo’s first feature-length project, debuted earlier this year at the Sundance Film Festival and was snapped up by Neon and Hulu for a record-breaking $17.5 million — and 69 cents. Despite strong buzz, the ongoing coronavirus pandemic squashed the possibility of a theatrical release.

Now, Barbakow and Siara are particularly curious to see how viewers respond to the themes of isolation and loneliness in Palm Springs, which also stars J.K. Simmons, Camila Mendes, Tyler Hoechlin, and Peter Gallagher. The film heavily explores how to cope with repetition.

“The world changed drastically a month and a half after we premiered at Sundance,” Siara says. “There’s no way we could have predicted this stuff would happen. The movie started five years ago as a conversation between Max and I about how our lives just generally started to feel like Groundhog Day, and now it feels like we’re all really living that existence.”

“I hope the movie will be cathartic for people,” Barbakow adds. “From that first weekend we spent in Palm Springs coming up with the movie until now, the same still holds true: No matter how crazy the world can be, love and a connection with other people are the only truth.”

While they enjoyed working together on Palm Springs, Barbakow and Siara are headed in different directions for their next projects: Barbakow is set to direct Game of Thrones stars Peter Dinklage and Jason Momoa in the vampire romp Good Bad & Undead, and Siara is developing a dark comedy series called The Resort. He also hopes to be invited to another Palm Springs wedding soon.

“I’m kinda bummed all my friends are now married,” Siara jokes. “I actually love going to weddings. It’s a forced getaway for the weekend. Hopefully, they’ll all get divorces and have other weddings in Palm Springs.”