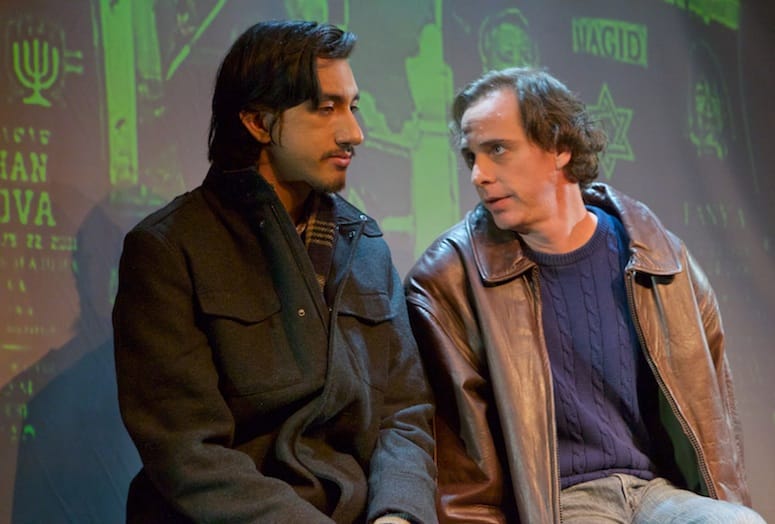 Now playing at the Desert Rose Playhouse in Rancho Mirage is part one of Tony Kushner’s epic AIDS drama set in New York City in 1985.

Featuring characters that include a gay man living with AIDS, a closeted right-wing attorney, the ghost of a Communist spy, a former drag queen, and a politically conservative ex-Mormon whose wife is a Valium-popping agoraphobic, the acclaimed two part play, first performed in 1991, won two Tony Awards for Best Play, the Pulitzer Prize, and a New York Drama Critics Circle Award, among other accolades.

Written for eight actors, several of whom play various roles, Angels in America is an ambitious production for the 85-seat Desert Rose Playhouse.

PalmSpringsLife.com spoke with Strait about undertaking such a big production.

Why did the Desert Rose Playhouse choose to do Angels in America?

“Every season, we choose one ‘Gay Heritage’ production, a play that’s an important milestone of gay theatrical literature. Previous Gay Heritage productions have included The Boys in the Band and Love! Valour! Compassion! We picked Angels in America for this season because the play’s political aspects are so appropriate to the current sensational and conflicted election atmosphere sweeping the country. Also Angels was one of the first mainstream plays to address the AIDS epidemic in a very personal manner when it premiered 25 years ago. And we had the great luck to have the best actors for these parts available at this time and wanting to perform in this play. It’s a very strong company of actors who can tell the stories very well.”

Do you see this play as an important history lesson?

“Angels is a landmark because it treats AIDS on a graphic, personal, and visceral level. Prior Walter has the start of visible symptoms, which progress very rapidly. But his lover, Louis, cannot let his love for Prior overrule his fear of what the disease is doing to his boyfriend and leaves him. This intimate portrait of the ramifications of AIDS was unique when the play premiered and opened a lot of eyes to the truth of the plague.” In a world of drug cocktails and PrEP, where it sometimes seems the younger generation isn’t the least bit concerned about HIV, why do think a work like Angels in America continues to be so relevant?

“With the current available therapies, AIDS may be viewed by younger LGBT people as less horrific than it was and continues to be. This play removes any rose-colored glasses and shows what really happened — and still can happen.”

HIV/AIDS is thought of very differently today than it was in the 1980s. When directing younger actors — some of whom may not yet have been born during the era this play covers — did you find yourself having to explain what that first decade of the epidemic was like?

“Half our cast of eight is old enough to have lived through the ‘plague’ years. The younger actors are realizing a lot of the facts, attitudes, and situations of the mid-1980s through cast discussions and the incredible script.”

Have any of their reactions surprised you?

“I wasn’t surprised because I knew these were smart and compassionate actors. In Angels,  they needed to learn alot about Jewish traditions, Mormonism, AIDS, Ronald Reagan, and the 1980s. Two cast members performed dramaturge duty in addition to acting — they researched and answered questions, provided background information, and helped greatly to make the production as authentic as possible.”

This is a difficult play to stage. As Tony Kirshner himself has said, “it requires an immense amount of inventiveness.” How big a challenge was it to tell this story in your space?

“We are used to the limitations of our charming playhouse and addressing production challenges to our advantage. There is a vision of a burning book and the finale entrance of the Angel to stage. We’ve created unique and effective ways to do this. The balance of the play is an actor’s piece with cast members performing all the scene changes and making the production run. It’s great to see.”

Will you be doing the second installment next season?

“Next season’s Part Two depends on the reception to Part One this season and the availability of the actors to continue their roles. Stay tuned …”