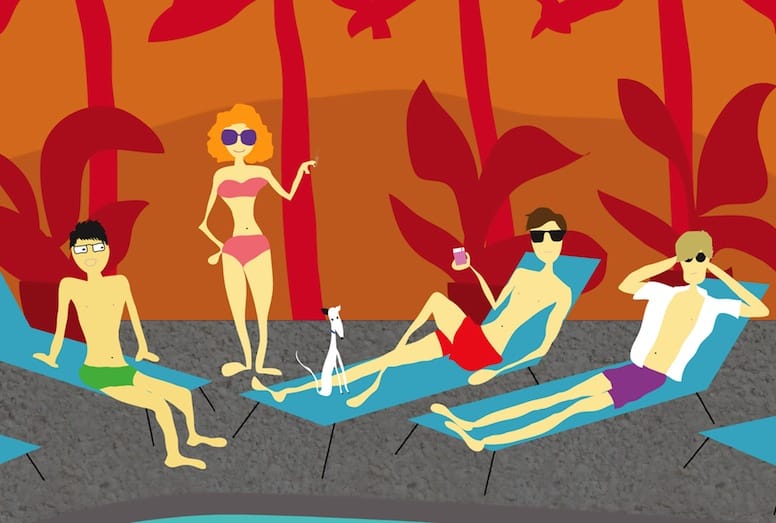 Nate Clark likes to get away from it all.

He has climbed Mt. Kilimanjaro, and is about to embark on the AIDS/LifeCycle 2015 bike ride taking him from Los Angeles to San Francisco. The opportunity to combine philanthropic endeavors with the chance to ‘escape’ is extremely appealing to Clark.

“I’m a person who likes to hangout, relax, and take trips that allow me to ‘get lost in the woods,’” he says. Palm Springs has become a place for Clark (pictured at right) to “go off the grid” with his partner Allen Loeb and their comedic friends, and the duo have taken it a step further by collaborating on a web-series film born from their desert adventures.

Somewhere In Palm Springs is based upon the funny conversations lifted from those group gatherings, and the animated short has been selected for screening at the 21st Annual Palm Springs International ShortFest, which runs June 16-22. The animated “shag-style” film tells the tale of three gay men and their girlfriend hanging out at a Palm Springs resort hotel pool.

In addition, Somewhere In Palm Springs is one of 13 films to represent the ShortFest Online Film Festival, which has been playing on the festival website (http://www.psfilmfest.org/onlinefest) since May 26. Online voting for these films opens June 9 and runs through June 20, with the “ShortFest Online Audience Award” announced at the Festival Award Ceremony on Closing Night (June 22).

The Palm Springs International ShortFest is an Academy Award-qualifying festival, and has been hailed as one of the world’s most acclaimed short film showcases. The festival will feature more than 300 short films with submissions from more than 50 countries. The six-day program includes seminars, panel discussions, roundtables and master classes staged free of charge for attending filmmakers.

“We (and partner Loeb) were surprised the film was selected for such a prestigious event,” Clark says. “We wrote, directed, and animated the film ourselves. We are so encouraged by the response, and we are excited to be among other respected filmmakers.” Allen Loeb collaborated with Nate Clark on the short film.

Clark is no stranger to comedy. He is an alumna of the Groundlings Sunday Company and a theater veteran with a busy life composed of gigs as an actor, comedian, and writer. He is a current performer at Upright Citizens Brigade (http://ucbcomedy.com/user/7611) and currently has his own YouTube channel after receiving more than 4 million views of his humorous video response to his towing of a well-known YouTuber’s car.