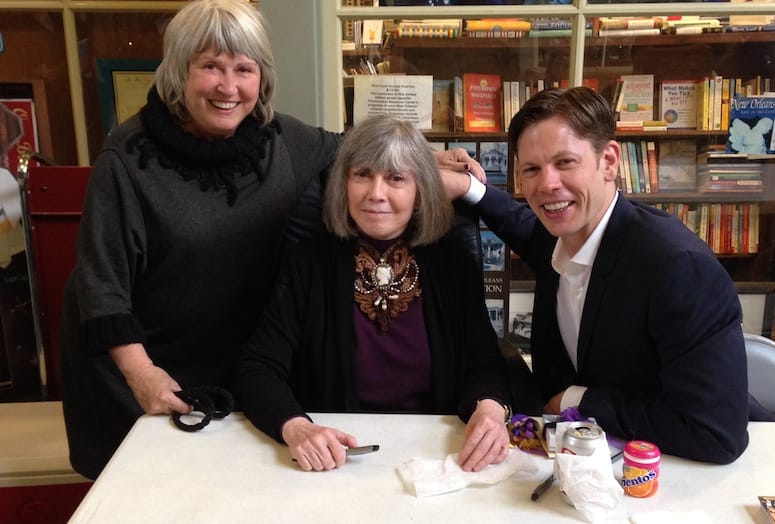 Anne Rice is celebrating a bit of a renaissance, emerging from what she calls a “vacation” with the release of her latest book, Prince Lestat: The Vampire Chronicles.

The book continues Rice’s legendary vampire saga that began with “Interview with the Vampire”.

Rice, who has made the Coachella Valley her home for a number of years and currently lives in Palm Desert, will sign copies of her new book while appearing with her son, author Christopher Rice, at 1 p.m. Dec. 6 at Just Fabulous in Palm Springs. Christopher will sign his latest book, The Vines, a supernatural suspense thriller. Mother and son just recently concluded a lengthy book tour on the road.

“We have so much fun,” says Christopher. “I know some people will ignore me if she’s there…people get nervous. The best part is the babies, though.  They are the cutest things and we’ve had more than one crying. My mom will hold (the baby) and it’s calming for them. Bring your babies to the book signing!”

Anne says she loves seeing her son’s success and is thrilled he has seemingly followed in her literary footsteps.

“I love it!  I think he got an enormous attention with his first manuscript (The Heavens Rise),” she says. “He bloomed earlier than I did.”

Christopher shares that when he showed his first manuscript to his mom for feedback, “She made her notes but came to me later and said, ‘Ignore my notes. I was critiquing you on how to write a better Anne Rice novel…not a Christopher Rice novel.'”

Adds Anne, “I very much believe in respecting the author’s voice.” Anne Rice has lived in the Coachella Valley for many years.

The Coachella Valley has been a source of inspiration for Anne, who says she loves the desert’s beauty, fresh air, and sunshine.

“I thrive on change and beauty, and this is a lovely contrast to the South and New Orleans, but in some ways equally beautiful,” she says. “I have a great fondness for sunshine. It’s a mood elevator. I find that the places you write about are the places you love and care about.”

Anne says she added another bookmark to her popular series “The Vampire Chronicles,” because she missed the main character, Lestat.

“I love Lestat like no other character…he’s part of me,” she says. “I thought I was finished, but I needed a vacation not an end. I wanted to bring him back…to come out of vampire retirement…there is a lot more to say.”

Guests are invited to reserve their copies or pre-purchase books by calling Just Fabulous at 760-864-1300, ext. 1.