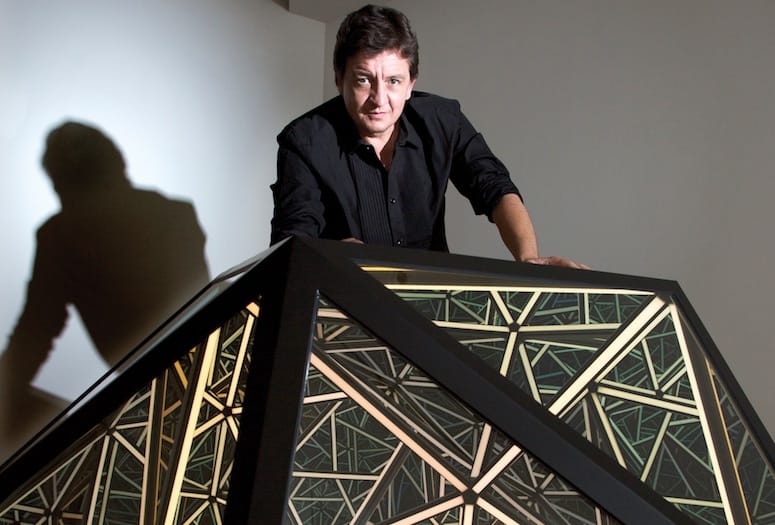 First, you see a crowd of people, and then you’re awestruck by their fascination: a massive geometric form outfitted with LEDs and mirrors that create the illusion of infinite space. At art fairs across the United States, including this month’s Seattle Art Fair, it’s impossible to ignore the 80-by-96-inch sculpture by the L.A.–based British artist Anthony James. It’s often the star attraction, drawing both serious collectors and lookie-loos to the booth for Palm Desert–based Melissa Morgan Fine Art.

“It’s easy to relate to,” he says of the sculpture, Portal Icosahedron, asserting that it offers an opportunity for “unity consciousness.” “I developed a language that is not figurative, not abstract, not English, not French … it’s universal. It doesn’t matter where you’re from; you see it identically.”

The illuminated icosahedron — a polyhedron with 20 faces, 30 edges, and 12 vertices fabricated in glass and steel — draws from minimalism, light and space, and conceptual art.

“I come from a formalist background,” says James, who studied at Central Saint Martins College of Art and Design in London. “Donald Judd was always my favorite artist. It isn’t just what he made; it’s how he thought and how he worked. My job as an artist is to make my work look effortless, but of course it’s not. The human eye only hits the mistakes. I will never let your eye hit on a mistake.” 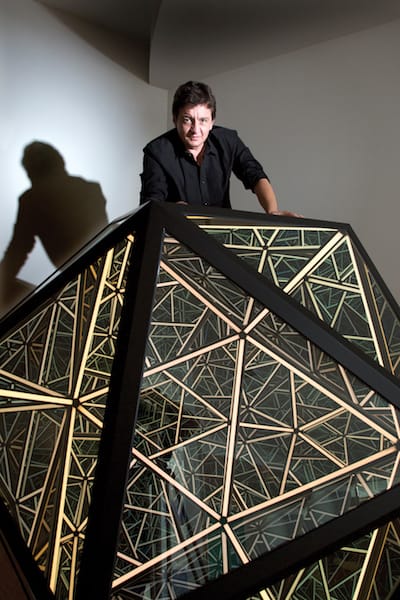 James eschews drawings and renderings, preferring to work in three dimensions to maintain purity. “If I draw it, it’s compromised or contrived before I make it,” he intones. “My work doesn’t exist until it exists. It’s not contrived. It’s my truth.”

The 45-year-old artist burst onto the scene in 2008 when he set ablaze his prized possession, a Ferrari 355 Spider, and entombed it with birch tree trunks in a mirrored vitrine with fluorescent lights — a “sacrifice” he called KO, which is short for kalos thanatos, or “beautiful death.” He says, “The ancient Greeks used to sacrifice to Venus in birch forests, so it’s like a temple.” While the work rings of Damien Hirst’s The Physical Impossibility of Death in the Mind of Someone Living, a 14-foot tiger shark preserved in a tank of formaldehyde, it proved a harbinger of James’ exploration of death, destruction, and rebirth.

He has since created a body of work that instigates discussions about divinity, infinity, and cosmology. “I’m trying to leave the material world,” he beams. “I have no expectations [of the viewer]. I just try to deliver something no one has ever seen.”