In the kitchen, the formerly shiny brown granite countertops are unrecognizable.
PHOTOGRAPHY BY ANTON GOSS

Anton Goss wears too many hats to count. Retail business owner of three (going on four) Acme Five Lifestyle locations, television production designer, abstract painter, property developer, restauranteur. We’ll stop there. Tierra del Sol in Yucca Valley is one of his two vacation rentals on Airbnb. The 2,800-square-foot home on 133 acres will soon be joined by an adjacent wedding venue he’s completing for up to 80 guests.

Goss is as resourceful as he is busy. He gave himself six weeks to refresh the five-bedroom property built in 1970 into an airy bohemian retreat. In prepping the spaces to catch eyes online, he upcycled the existing structure and its materials at every turn — an intentional exercise in maximizing his budget and minimizing waste.

“We sandblasted and grinded most surfaces throughout the home while repainting, adding wood accents, and decorating,” says Goss. “If you get a house with good bones, you don’t have to gut it.”

In the kitchen, the formerly shiny brown granite countertops are unrecognizable. “Everyone thinks you have to replace them. I’ve never seen this done, but I had my guy take a grinder to them and now everyone thinks they were hand-carved in Turkey.”

And, if it didn’t pan out? “Plan B is you rip them out and spend a fortune on poured concrete or butcher block, but try it first” because you have nothing to lose, Goss says. “Everyone is afraid to do it because it’s anti what everyone does.”

To revamp the brown shiny floor tile, his team took a floor grinder and grinded it down. Goss then did a whitewash over the porous top, mixing floor sealer with watered-down acrylic water-based paint in white with a drop of umber for tone.

Extending the dining room out 5 feet to reach the existing outdoor canopy structure was the only structural change he made, finished off by a cedar detail on the wall. 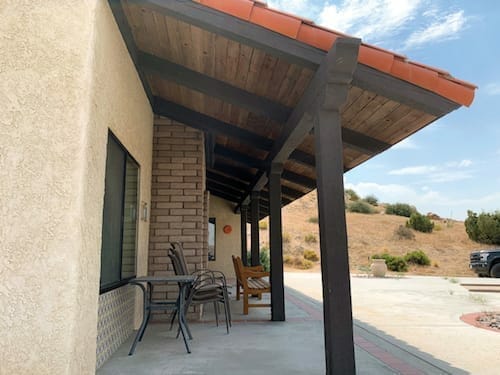 Paint the brick, sandblast the beams.

In the dark living room, where everything had been stained brown, the team sandblasted the trusses, beams, and floors before painting the brick white. Goss lightened the exterior with the same techniques.

“We didn’t make it perfect when we sandblasted. We purposefully left it uneven,” he says. “The trick is to look through the face value and see the beauty of the material underneath and what it could be. We get a lot of celebrities and high-end guests and they dig it because it’s a rustic fantasy, not modern like L.A.” 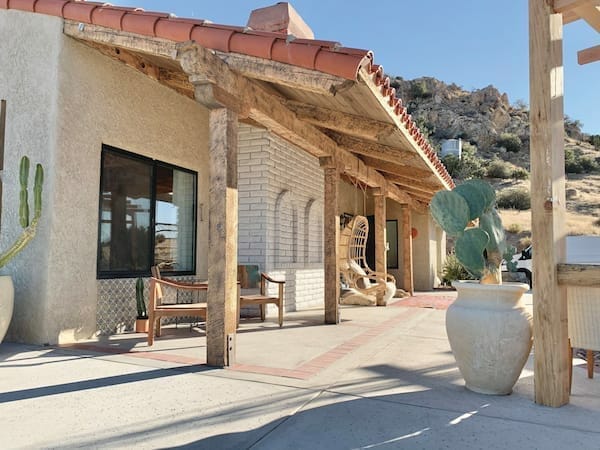 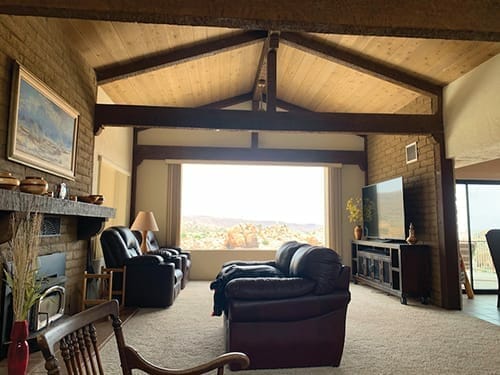 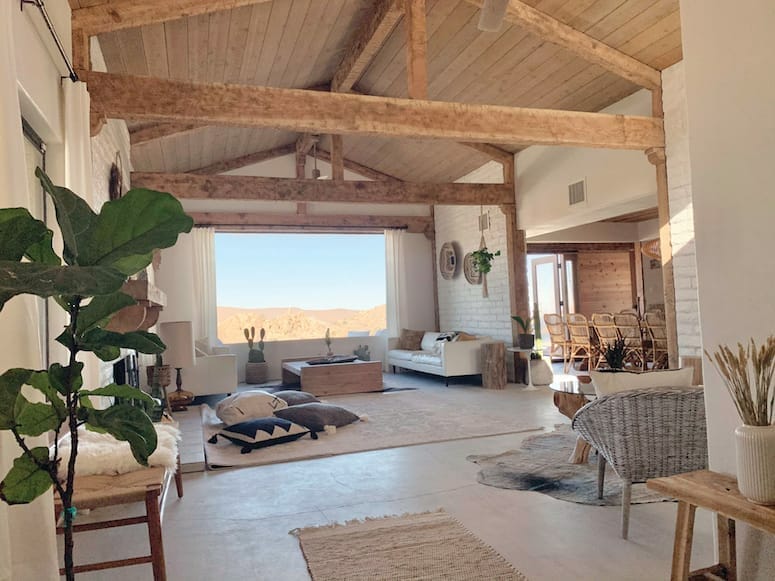 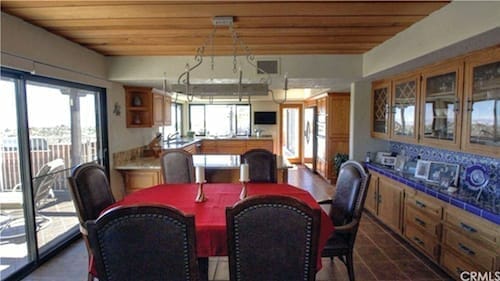 Open the cupboards, age the tile.

Goss removed the glass doors of the builder-grade oak cabinets in the dining area (above right) and sandblasted the wood frames to create open shelving “straight out of Santa Fe.”

His team used a hand grinder on the shiny blue tile countertop and patterned backsplash “adding 200 or 300 years of history. Those centuries of wear and tear are what makes Europe so beautiful,” he says. “Now it reminds me an old Italian counter they’ve been making pasta on for generations.” 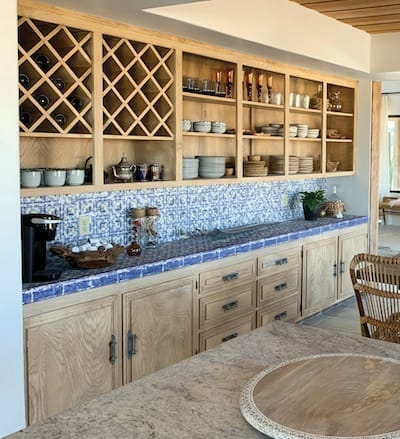 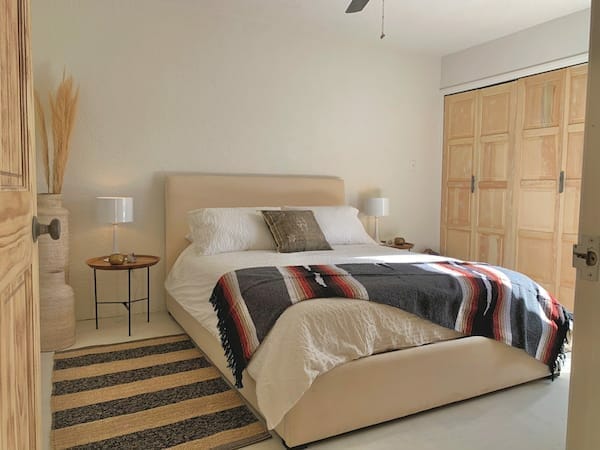 Blast the bedroom FLOORS AND CLOSET.

In this bedroom, he added instant patina by sandblasting the existing oak cabinets and their pulls. “Even though your first instinct is to replace everything, we didn’t need to buy new cabinet doors,” Goss says. “They look amazing after they’re sandblasted. So, for the most part, we opted to embrace the roughness of things.”  The tile floor went under the sandblaster before being brushed with whitewash. 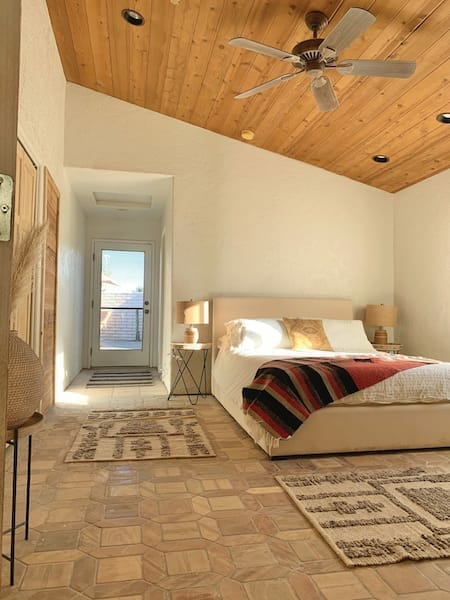 Goss pulled up the carpet in this bedroom where the tile floor below received the same sandblasted treatment as the floors in other areas, minus the whitewash. “For me, the lines in the tile left from the grinding give it more character,” he says. “Almost like the smoothness that the ocean gives to sea glass or a river to pebbles. Some people polish rocks; this is unpolishing everything. It really works if you’ve got good material underneath.” 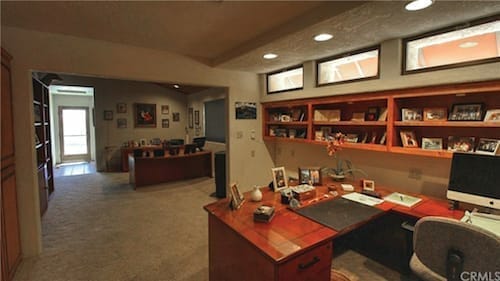 The home had a huge office that Goss divided into a bedroom and a TV room, filling the space between with cedar instead of drywall. He detached a wall storage unit to create a giant bench.

“It’s made out of nice oak,” Goss says. “When you grind it, sandblast it, and drop it on the ground, its not old-fashioned anymore.” After ripping up the carpet they found mismatched tile, which looks cohesive after meeting the floor-grinder. 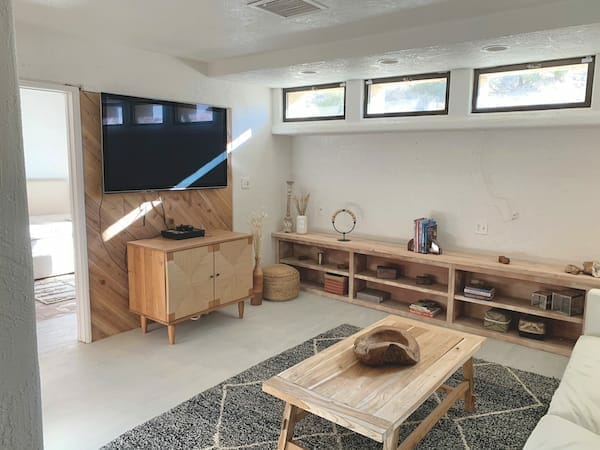