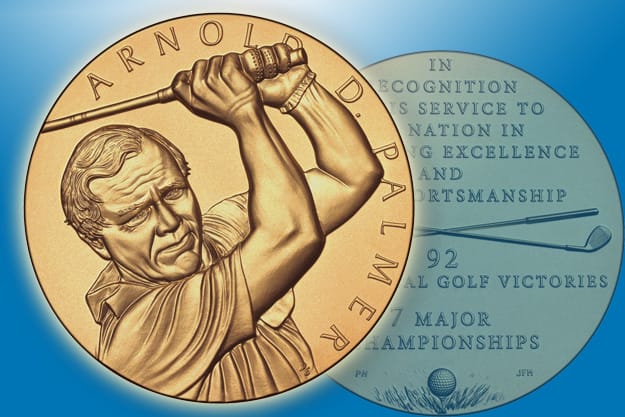 The desert’s own Arnold Palmer received one of the nation's highest awards, this week.

At a Wednesday ceremony at the U.S. Capitol Building, Palmer was presented with the Congressional Gold Medal for promoting excellence and good sportsmanship in golf.

Palmer – a part-time La Quinta resident, who has course at PGA West and a restaurant bearing his name in Old Town La Quinta – won 92 national and international championships.

He also served three years in the U.S. Coast Guard and spent 20 years as honorary national chairperson of the March of Dimes Birth Defects Foundation.

Don Everhart, a sculptor for the U.S. Mint, designed the medal, which features an image of Palmer finishing his golf swing with the inscription, “Arnold D. Palmer.”

The “tails side” of the medal was designed by U.S. Mint Sculptor Phebe Hemphill.  Her creation a pair of crossed golf clubs and a golf ball on a tee.  The inscription reads, “In recognition of his service to the nation in promoting excellence and good sportsmanship, 92 professional golf victories and 7 major championships.”

The U.S. Mint now offers bronze reproductions of the medal for $39.95 and a smaller version for $6.95.  For more information on how to purchase, click here.