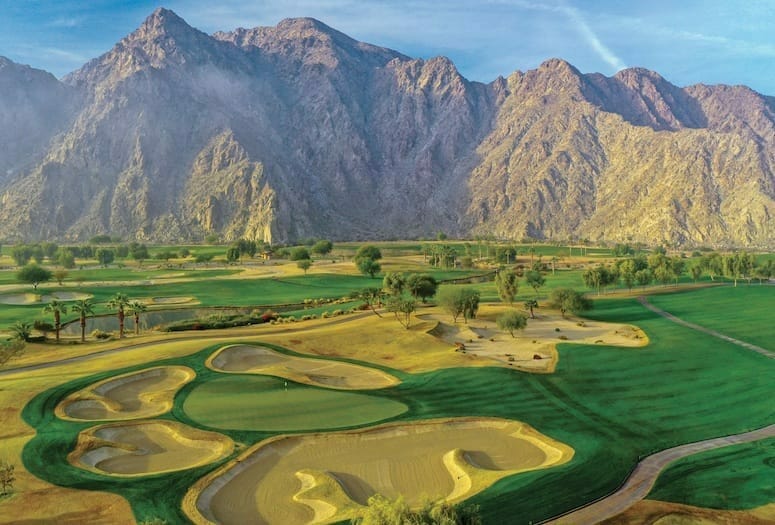 With 62 PGA Tour titles to his name, Arnold Palmer brought excitement and credibility to the game of golf, stature to the pro tour, and style to the Coachella Valley.

Originally from Latrobe, Pennsylvania, the aptly nicknamed King lived much of his life in Orlando, Florida; but he loved Greater Palm Springs. And the desert loved him back. Case in point: In 2018, two years after Palmer died, Charlie Mechem, his longtime friend and next-door neighbor at Tradition Golf Club in La Quinta — a course Palmer designed and a hideaway where he kept a home — rallied members to erect a statue there in honor of the golfer. 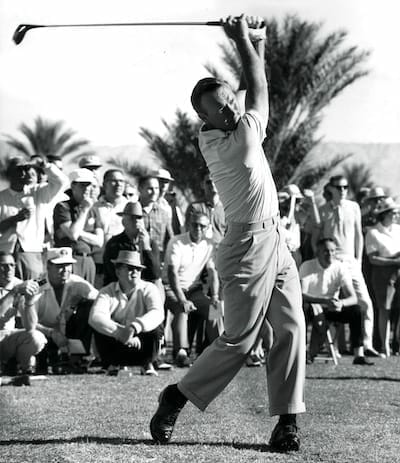 “I got some homeowners together and made the proposal, including how much it would cost,” Mechem says. “In about 10 minutes, it was taken care of.”

Although you’d need to be a Tradition member or guest to see the statue outside the private clubhouse, you can revel in Arnie’s legacy at a handful of public Palmer destinations across the Coachella Valley. 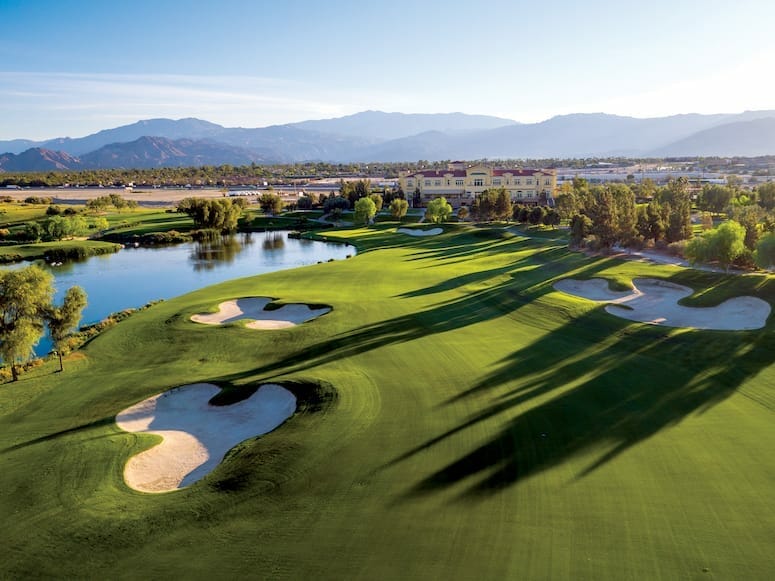 An Arnold Palmer tour of the Coachella Valley might start, surprisingly, north of Interstate 10, near Cook Street, where Palmer designed the Classic Club. The course is as classy as the architecture of the  clubhouse and its Mediterranean-inspired restaurant. For three years, it hosted the January pro golf event known as the Bob Hope Desert Classic before various sponsor and name changes (now  The American Express, held in January at PGA West in La Quinta).

Beautifully tucked against the Santa Rosa Mountains, La Quinta’s par-72 SilverRock Resort course is still playable while the property undergoes renovations. No amount of new brick and mortar can detract from the flow of Palmer’s design — or from the likelihood that, along the way, a golfer with a good eye may spot an elegant bighorn sheep on a rocky ledge. 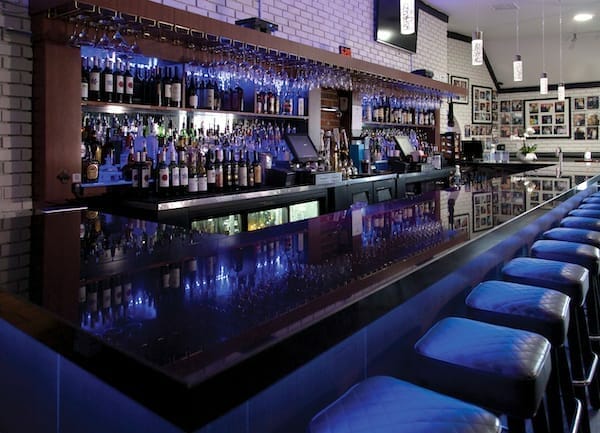 PHOTOGRAPH COURTESY THE NEST
The Nest in Indian Wells.

Palmer’s charm and personality extended well into the 19th hole. Among his go-to bars: The Nest, where desert winter nightlife finds few equals. Palmer occasionally stopped there for dinner while in town as a player and, later, while designing courses. One of The Nest’s investors, Peter Murphy of La Quinta, recalls Palmer dining and then heading into the bar, where the music was loud, and the crowd was loose and large. “He’d walk in, order a drink, and the place would go crazy,” Murphy says.

Only one restaurant bears Palmer’s name. According to Mechem, Palmer was never meant to be a chain restaurateur. “I advised him there had to be just one, this one,” Mechem says. “If there were a bunch of them, and somebody wrote in to complain about a meal, knowing Arnie like I did, he’d want to go wherever that restaurant was and fix it.” There is a room of memorabilia, including major tournament trophies and priceless photos. Guests often follow dinner with a walk-through. “A lot of times,” restaurant manager Dustin Nichols reports, “they leave with tears in their eyes.”

Palmer received a star on the Palm Springs Walk of Stars on Jan. 16, 2017. His was the 410th star in a collection that includes presidents, as well as Elvis, Marilyn Monroe, and Cheeta the Chimp of Tarzan fame. Find it in front of Eisenhower Health Center, which sponsored the star, at 415 S. Palm Canyon Drive.

On a trip to Brawley for a pro golf event, Palmer and his new wife, Winnie, stopped at this place called Palm Springs. Thunderbird Country Club would host the Ryder Cup that next November; Palmer wanted a look. It was love at first sight, and he would go on to tell sports writers that seeing Palm Springs made him never want to leave. Five years later, with a Masters title in hand, he returned to win the Thunderbird Invitational, forerunner to the Hope pro event. He returned again and again. 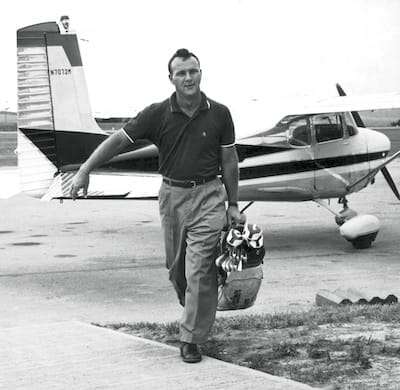 Arnold Palmer arrives in Palm Springs in 1955 for the Ryder Cup. 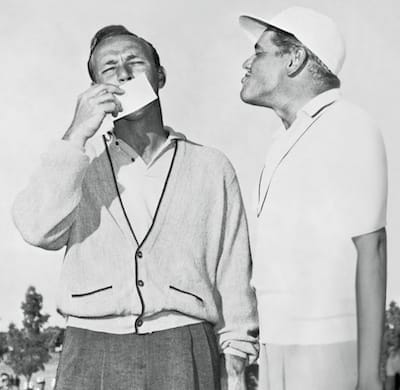 The tournament that winter in the desert became a pro tour event: the Palm Springs Golf Classic. Palmer, having won the invitational the year before, returned to Thunderbird, shot 22 under par, and won his biggest paycheck to date, $12,000. He would win again in ’62, ’68, ’71 and ’73. 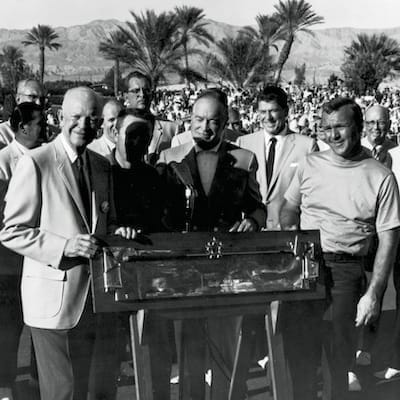 Palmer had not won in two years. He was 43 years old, and while he would eventually play in the Hope event 42 times, his name was no longer among the likely winners. But win he did, in a duel down the stretch with none other than Jack Nicklaus. On the 18th hole at Bermuda Dunes Country Club, needing only a par, Palmer sank a 7-foot putt for birdie. That was his style. It was his final PGA Tour victory. 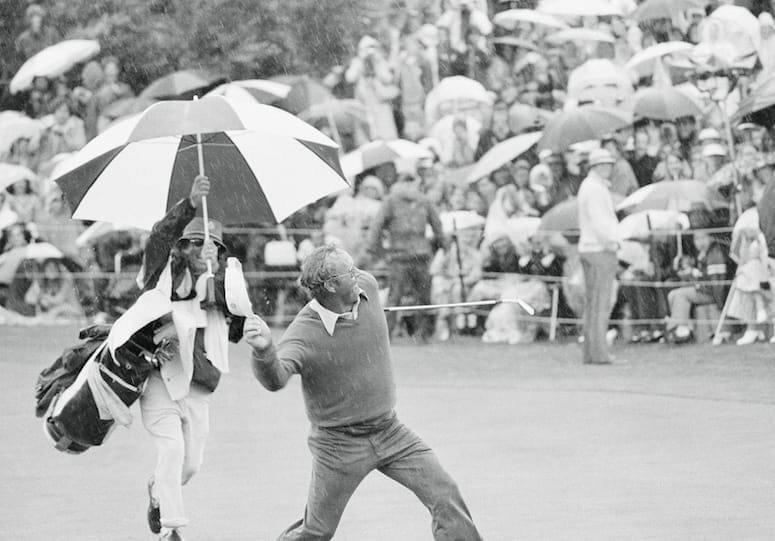 Palmer was 71, still playing, feigning competitive zeal, but mostly enjoying being in the desert. Somehow, midway through the tournament, he needed only a birdie and a par to finish his round with a 71 — and to shoot his age. It hadn’t been done on the tour since Sam Snead’s feat 22 years earlier. On the Arnold Palmer Course he designed, and which served as tournament headquarters, he birdied 17, parred 18, and reminded spectators that he was, in fact, “The King.”

• READ NEXT: 9 Cocktails Celebrate the Tastes of Fall in Greater Palm Springs.