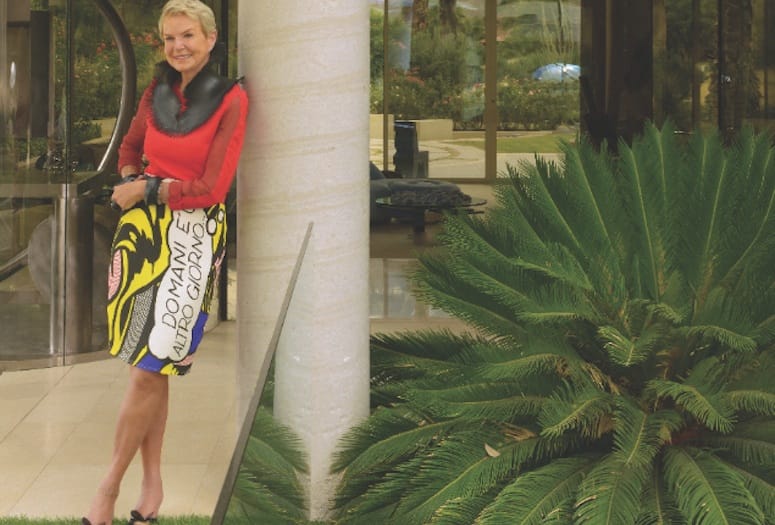 For her, that translates to more freedom in what to acquire. “You just do what you feel in your heart speaks to you,” she says. “It doesn’t have to be anything that is sought after by others. It could be a newer or unknown artist; it could be anything and everybody.”

As it turns out, much of what speaks to her artistic sensibilities also speaks to the multitudes. Donna, with her husband Cargill MacMillan Jr., gifted more than 100 contemporary pieces by such notable artists as Louise Bourgeois, Anish Kapoor, Ellsworth Kelly, and Roy Lichtenstein (there were 75 in total) to the Palm Springs Art Museum in 2009 — a donation that dramatically expanded the museum’s offerings of contemporary international works.

This was not the first art-related philanthropic gift the couple made. Minnesotans by birth, the pair also donated artwork to the Walker Art Center in Minneapolis, the Minneapolis Institute of Arts in Minneapolis, and University of St. Thomas in St. Paul.

While sizable, their gifts comprise only a portion of the art the couple acquired in their 23 years together. Housed inside and on the grounds of the Guy Dreier–designed 14,000-square-foot home the couple shared, their eclectic, global collection features more than 250 works — including pieces by Dale Chihuly, Salvador Dalí, Tom Friedman, Jeff Koons, Maya Lin, and Kara Walker — that span sculpture, painting, garments, furniture, jewelry, and neon signage. It’s a collection that reflects myriad stories — of the couple’s travels together, of the artists behind the works, of how the MacMillans came across the pieces, and of the love story of the couple itself.

Since Cargill passed away in 2011, Donna has continued their legacy as patrons of contemporary art. Here in the Coachella Valley, her donations and promised gifts have added works by Angela Ellsworth, Evan Holloway, Michael Petry, Lari Pittman, Sarah Sze, Zhan Wang, Andy Warhol, and Christopher Wilmarth, among others, to the Palm Springs Art Museum. The artwork in the living room includes three glass stones by Michael Petry (left, on the floor), Dale Chihuly glass pieces (on the fireplace wall), Yarn & Ceramic Hands by Héctor Velazquez (on the coffee table), wooden figures with umbrellas from Thailand (behind the couch), melting Buddhas by Bob Walker (on the piano), One Cent Silver by Bob Van Breda (behind the piano), and Happy by Tim Noble and Sue Webster (on the glass wall).

It was the mid-1970s, and Cargill and Donna — work colleagues at the time — were on a scouting trip to purchase art for the newly built Cargill Office Center in Minnetonka, Minnesota. (The two were members of the company’s art committee.)

It was then that Donna spotted a print by San Francisco painter Richard Diebenkorn in a gallery and immediately took a liking to the piece. “We were in New York the day it came out,” Donna says.

“I really wanted to buy it, but we had a large office building to plan for, and the piece was going for more than the budget allowed. So we let it go.”
After the couple married in 1988, they returned to that gallery. As luck would have it, a resale of the print Donna was enamored with a decade earlier had just become available. They bought it for their private collection — one of many pieces that have special meaning for Donna.

Another is the first piece the couple purchased together: Los Angeles sculptor Gwynn Murrill’s Hawk, which was with the couple for their entire marriage. “Each day, I say, ‘good morning’ and ‘good night’ to it,” Donna says of the bronze sculpture that can be seen on the lawn through the windows of her bedroom suite.

“It really is a house of memories,” she says. “For 18 years, we traveled six months of the year. Our whole life is one of memories; we just had a great time doing what we did.”

The Making of a Collection Art in this hallway, which leads from the living room to the breakfast room, includes Gold Window by Eric Orr, a golden door by Subodh Gupta, a Gold Flood below the door by Karen Lofgren, a chalkboard chair by Scott Maggart, a hair spider web by Kevin Carter, and a painting (on the wall) by Kara Walker.

Attending art fairs and auctions worldwide became a shared passion for the couple. If they didn’t agree on a piece, they would compromise and not purchase it — but that didn’t happen often. “We basically had about the same eye for the most part,” Donna says. “We both responded to art that engages and stimulates. But there were some things that one person would like more than the other, and there were a lot of things that we bought because it meant something personal to us [such as the neon artwork I Can Never Leave You by Tracey Emin].”

Donna and her husband did, however, follow some unofficial rules when choosing art. “I can’t have anything that is violent, or just not pleasant for children,” Donna says. “It also had to be something that we were comfortable with as a family.” (The MacMillans’ six children provided them with numerous grandchildren.)

When it comes to defining what makes “good art,” Donna is somewhat hesitant to answer. “Oh, that’s a loaded question,” she says, smiling. “For me, it’s the creativity probably more than anything. The conception of it, how it developed, and the eye that the artist had to have to conceive such a piece. Just the creativity of the artist’s mind is really interesting.”

She also likes art made from found objects. Twentynine Palms mixed media artist Cathy Allen’s PyroStyro Goddess, made of carved and burnt polystyrene foam from the desert, prominently stands in a corner of Donna’s living room.

Donna also points out a Héctor Velázquez sculpture on her coffee table called Yarn & Ceramic Hands as a piece whose creation and fabrication process sparked her interest. “That really is an amazing piece,” she says of the Mexico City artist’s sculpture, which was molded from real hands, set in resin, and covered in yarn. His work is known to explore the internal and external worlds through the body, linking physical and spiritual existence. Art in the master bedroom suite includes a lips couch by Salvador Dali, paintings by Eric Orr, a woman's leg figure chair by an unknown artist, glass pieces by artists from the Pilchuck Glass School, shoes by Wendy Holden, glass desk and lamp by Carl Springer, green phone on desk by Raymond Carter, two vases by Jonathan Adler, and bronze and glass lamps by Dan Dailey.

Donna believes in passing along to others what life has given her. Although she comes from humble beginnings — she grew up on a farm “milking cows, slopping pigs, and feeding chickens,” she says, before moving to a small rooming house with her mother in Minneapolis and just making ends meet — she feels she was born lucky.

She cites the influence of a wonderful role model in her mother, as well as having an upbeat attitude since she was a little girl, for the positive trajectory that led her to be who she is.

“If you take a disappointment and make something better out of it — and you should — then you have succeeded,” she says. “Every day, literally every day, something nice happens to me. I have the most blessed life of anybody you will ever meet.”

Sharing art with the world is just one way Donna expresses her gratitude. She sits on the board of directors for the Palm Springs Art Museum, College of the Desert, McCallum Theatre, and Palm Springs International Film Festival and donates to many charities. In fact, she has been recognized and honored for her loyal support by almost every organization in the Coachella Valley. (On Dec. 4, the McCallum Theatre is the latest to pay her tribute, citing her ongoing generosity and involvement in the community.)

So what does the future hold for this dynamic woman? Always eager for tomorrow to come, Donna is still actively acquiring art and exploring her many passions — so we’ll all just have to wait and see. One thing’s for sure: We’re going to love it.