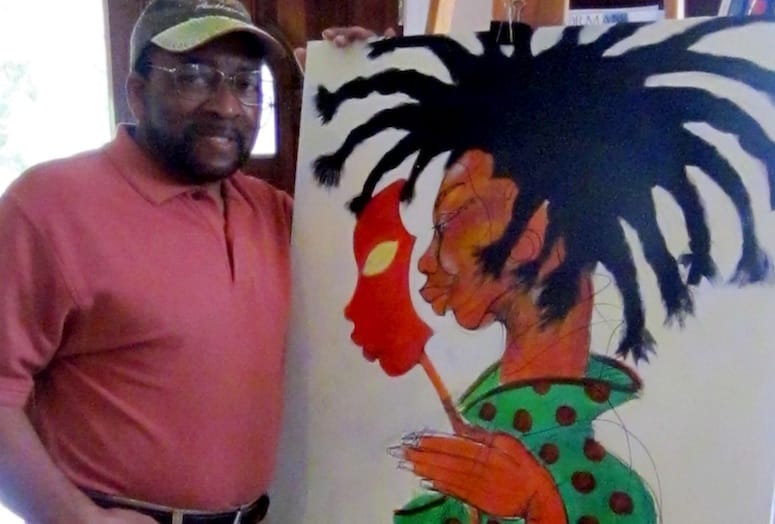 The African American art wave began for Charles Bibbs when he saw “The Cosby Show” in 1984.

For the first time, African American art was being shown on national TV with its bold colors, dignity, and strong cultural roots.

“Up until then, most black houses in America had three things on their walls: a portrait of Martin Luther King, a portrait of President John F. Kennedy and a white portrait of Jesus Christ,” says Bibbs, an artist, entrepreneur and philanthropist.

The Riverside resident believes young black people need strong art images to help them develop confidence. His own home is filled — floor to ceiling — with a collection of African American paintings, sculptures and masks.

“I wake up every morning and look around at all this beautiful art and feel calm,” he says.

“Civil Rights in America: Where Do We Stand Now?” hosted by the Palm Springs Black History Committee and the City of Palm Springs, will feature artwork by Bibbs and Synthia Saint James, from Jan. 30 to Feb. 28 at the Palm Springs Art Museum.

“Mostly what people like about my art is its movement and flow,” he says.

A Bibbs standout piece in the show chronicles black history in America from slavery to Martin Luther King to the March on Washington and the 50 years since then. All of the images are confined to a larger image of an elderly woman.

Two of Bibbs’ pieces in the show are collaborations with Synthia Saint James, a longtime friend. Since “The Cosby Show” was showcasing the works of Varnette Honeywood, Bibbs set out to push his own artwork out to the masses via New York trade shows.

“I wasn’t interested in reaching the one percent who could already afford art,” Bibbs says. “I wanted to reach the 99 percent.”

Bibbs worked with distribution companies to reprint his images at cut-rate prices, but enabled him to reach 100,000 people.

In 2008, Bibbs’ art gained national attention with the film, “The Secret Life of Bees,” starring Queen Latifah and Dakota Fanning. His image of a Black Madonna was an integral part of the movie, which took many renditions to achieve.

A framed print of the Black Madonna is displayed on a gold easel in his home (see photo above).

To take a closer look at African American art in America, Bibbs started the magazine, “Images,” which lasted for 12 years. Now he’s putting together a book compilation of past issues.

“Sometimes I tell my wife Elaine that I’m not coming home,” Bibbs says of his studio that is 20 yards from his house. “She understands that it’s important to keep the flow going.”

He also promotes “The Five,” a group of aspiring young black artists from his own visual arts organization, Art2000.

“It’s important to teach them about the business of art,” says Bibbs, a former manager at McDonnell Douglas. “They have to look at art as a product and themselves as the manufacturer.”