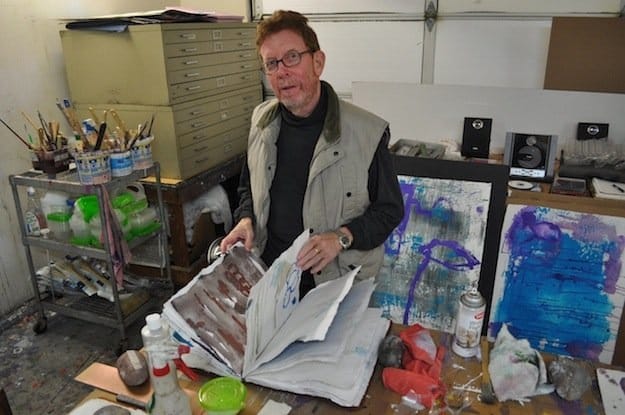 La Quinta artist Tom Savage was listening to talk show host Charlie Rose interview director David Chase (The Sopranos) about what fate can bring you, and the conversation struck a chord that may not have rung true a year ago.

“It was what Rose said that struck me,” Savage recalled of last month’s televised interview. “'It’s life that is holding you back’. And I thought, ‘That’s what was holding me back’. In a way, this operation is like it was meant to be. I knew I was headed in that direction. Not intuitively, but I think I knew I was testing my own mortality.”

Savage, who moved to Palm Springs in 1995 after living in Los Angeles for 11 years, was diagnosed with cirrhosis of the liver in 2006 brought on by his own bout with alcoholism. Through a number of steps beginning with The Fair Foundation, an organization that helps refer patients for transplants, to Loma Linda University Medical Center and ultimately to the liver transplant program at Scripps Memorial Hospital in La Jolla, Savage received a new liver in March 2012.

Like many struggling artists, Savage worked in art galleries both in Los Angeles and in the Coachella Valley to support himself while he tried to forge his painting career. The obstacles sometimes seemed enormous wondering when his break would come balanced against the internal doubt and pressure to fulfill his talent’s destiny.

This weekend, Savage’s work will be exhibited as part of the Bruce Lurie Gallery out of L.A. at the second annual Palm Springs Fine Art Fair at the Palm Springs Convention Center. More than 50 galleries will be represented starting Friday (Feb. 15), and this will be one of Savage’s biggest exposures to Coachella Valley audiences.

Palm Springs Life.com talked to Savage about his painting, transplant and its impact on his art.

How would you characterize your style of painting?
“In my case, it’s a derivative of abstract expressionism. I’ve always thought about painting being put together in layers. The early study I did in painting, you were taught to build it from a drawing stage forward. I always enjoyed the phase of the painting where the drawing is let go and you have to start painting. I was always sort of sad to cover up all the sketching, all the spontaneity that would happen. That’s kind of carried over to where I am now. That’s what I like to see the viewer see now, the underpinnings of a painting. The route less taken and show what that’s like. I don’t try to cover it up.”

Once it was determined you had cirrhosis, did you believe you were facing a life or death situation?
“I had gone to AA (Alcoholics Anonymous) meetings. Going to something like that and repeating this ritualistic process, it didn’t work for me. But when you’re told you’re going to die, that’s different. They never talk about that at AA meetings – that if you keep drinking, you’ll die.”

Once you began treating the cirrhosis, were there any complications?
“I was taking medication to prevent it from spreading or for other side effects. The medications caused some unsteadiness, and I fell outside and broke both of my shoulders. I didn’t know how severe it was at the time. I went to Loma Linda to have it looked at it, and they decided they couldn’t work on it at all because of my liver’s condition. I would probably bleed too much or bleed to death. They told me to wait. So I’m still putting up with an enormous amount of pain.”

What happened next?
“Loma Linda took me off their waiting list that day. It happens when you injure yourself. I asked them where do I go next, and they suggested Scripps in La Jolla. They put me on the list and didn’t give me any guarantees, but I had done all of the preparatory things. On March 10 (2012), they called to say they were ready if I was. I asked if I could think about it and call them back. They said, ‘No, you can’t’. It was 10 p.m. at night. I asked if I could call them back in 2 minutes, and they said yes. I just decided to do it.”

What impact has the liver transplant had on your painting?
“I think it’s taken some of the bitterness out of me a bit. Certainly out of the art-making part. I might as well have been in my studio chopping wood when I was living in Los Angeles. That’s how much effort I was putting into it. But that effort was a lot of anger about the lack of exposure, lack of financial success, and thinking about what people expect. You work so hard and you get nothing for it. But that’s the way it is. You just have to live with it.”

What did you come to realize about yourself?
“I realize luckily that I am not alone. A lot of people hurt and a lot of people are scared to death that they are going to fail. I realize that I have a gift and I will use it to the best I can.”

How much time are you devoting to your painting now?
“Recently with the help of a patron, I have been able to devote all of my time to my art. It’s very different. You feel pressure, but you don’t feel pressure. The only pressure I feel is from myself, and it’s the same amount I have put on myself. If I don’t do at least 3 to 4 hours of work out here, looking at what I am doing, then I’m not achieving my goals.”

Are you looking forward to having your work shown this weekend in Palm Springs?
“The obvious enthusiasm around the art fair this year proves it will be a viable place. I think the caliber of work I do is not necessarily superior in its intent or authorship, but more like that people could benefit from seeing it.”

For more of Tom Savage's artwork, visit his website.