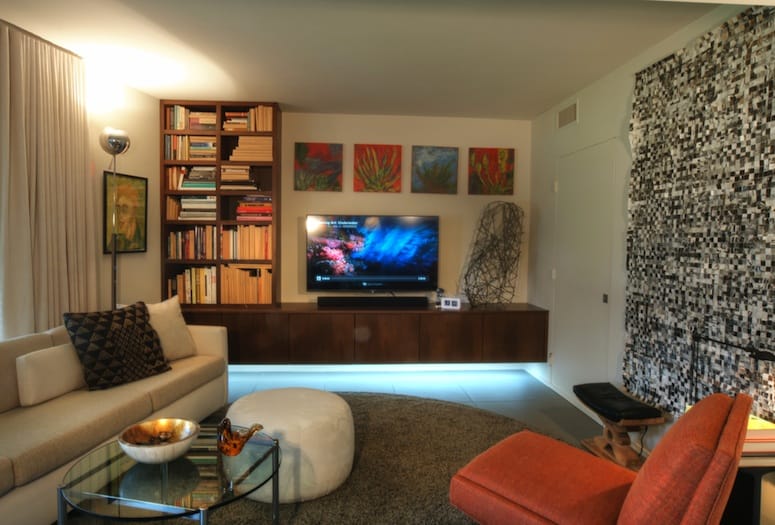 Some interior designs embody a particular era or style: Midcentury, Art Deco, ultra modern—and there's nothing wrong with that.

On the other hand, there's also something to be said for an air of mystery. “We wanted the remodel to look like you couldn’t tell when it was done, so we have everything from the '50s to '90s in here and it’s all kind of combined together,” says artist and designer Samuel Fleming Lewis of the condo he shares with his partner, Stephen Kladder.

The couple, who moved to the desert from San Francisco in December 2014, own the design studio and gallery Lewis & Kladder located in the Antique Galleries of Palm Springs building in the Sunny Dunes Antique District. PATIO: A bench that opens up to provide extra storage was added to the back patio. Lewis came up with the idea of designing it at an angle to mimic the angle of the condo’s front window. Continuing the indoor tile out onto the patio makes the condo feel larger overall and gives the couple the sense of an outdoor room. “We wanted the beadboard to look like it had always been there, but it’s actually new,” says Lewis. The cabinet on the back wall conceals a small barbecue grill.

When it came to designing their home life, they settled into a 1,000-square-foot unit that Kladder purchased from his family in 2002 at the Desert Lanai condo complex in central Palm Springs. The nearly nine-acre community was built in four phases beginning in 1961 and designed by architect Charles Dubois, who also designed many homes in the Vista Las Palmas neighborhood. Dubois’ Swiss Miss-style homes — which are reminiscent of a Swiss chalet — are particularly distinctive and their architectural eccentricities are on view throughout Desert Lanai.

Kladder had only lived in the condo for a year before meeting Lewis and moving with him to San Francisco, although they came to the desert occasionally for vacation. “The decor was original to 1964 when it was built,” says Kladder. “The only thing we had done was paint and take out the carpet to expose the concrete floors. But it was all original bathrooms, all original appliances.”

BATHROOM BEFORE & AFTER: Prior to the renovation, the cabinet doors in the master bathroom were in such rough shape that the couple eventually removed them. The new countertops are the same quartz that was used in the kitchen and the new cabinet is walnut. The couple replaced a bathtub with a wide shower and laid the large format subway tiles vertically to offset the low ceiling height. The artwork is by Kladder.

While they liked the existing layout of the condo they found that it wasn’t ideal for full-time living. Their renovation took about three months and included an update of the home’s two full bathrooms and the kitchen. They maximized storage by taking the kitchen cabinets all the way up to the ceiling and raising the height of the unit’s closets as well. And they also removed the popcorn ceilings and unified the color and finish to make the condo look larger.

The relatively quick remodel was probably aided by the fact that the couple lived temporarily just two doors down in a unit owned by Kladder’s brother. His sister also has a home in the complex which Lewis and Kladder used to store their furniture. “[And] our contractor, Daniel Morales [of D & C Morales Construction] was great and he made it a really smooth process for us,” adds Kladder.

BEDROOM BEFORE & AFTER: The master bedroom’s pre-renovation look was less contemporary than its current incarnation. Lewis designed the solid oak bed which was built by San Francisco's largest antique showroom and custom furniture maker C. Mariani Antiques. “The black-and-white art above the bed were the last paintings I made in San Francisco before having to pack our art studio prior to moving to Palm Springs,” says Lewis. “The four panel series is based on African serpentine motifs. Installed together they look to me like midcentury motifs. They are acrylic paint on muslin-wrapped boards.” He also has a large collection of African art and sculpture which is displayed here and throughout the condo.

The walls and ceilings are painted the same color throughout the home, although the color (Edgecomb Gray from Benjamin Moore) has chameleon-like qualities that enable it to look different in each room and at different times of the day.

“It’s our favorite go-to color because it does change so much,” says Lewis. “It can go from gray to almost white to beige to taupe.” It’s also a perfect backdrop for the couple to showcase the artworks they’ve created.

“We realized once when we got done with all of this that every piece in here is an original piece of artwork,” says Kladder. “It [the neutral nature of the color scheme] became a canvas for our art.” DINING ROOM: The condo’s open layout has a dining area that bridges the space between the living room and the kitchen. The sconce is original to when the unit was built in 1964. A Kuba cloth from Africa adds a graphic punch to the entrance of the kitchen, while artworks by Kladder (left) and Lewis (right) brighten the dining area. KITCHEN: The kitchen was reconfigured to create a large pantry and there was a stationary island where the mobile island is now. “The island was longer and skinnier so we took that out and reconfigured the shape so that it worked better,” notes Kladder. “Where the refrigerator is in the back closet was a little narrower by about four inches, so we pulled that into the kitchen but then pushed it back towards the far wall because before you had a little crook when you walked out of the bedroom. So it just smoothed the lines and [also] allowed us to put a washer and dryer back there.” The appliances include a Miele 18-inch dishwasher, Fisher & Paykel refrigerator and range, KitchenAid microwave, and a range hood by Zephyr. The countertops are Zodiaq quartz by DuPont and the custom oak cabinets have a cerused finish where the wall paint color has been added to the grain.

LIVING ROOM BEFORE & AFTER: The living room’s old wall color was a reference to the orange in a painting by Kladder that hung above the sofa. The current furnishings here and throughout the home combine pieces from the couple’s San Francisco residence with ones purchased specifically for the condo. The artwork hanging above the Parsons table is by Kladder.