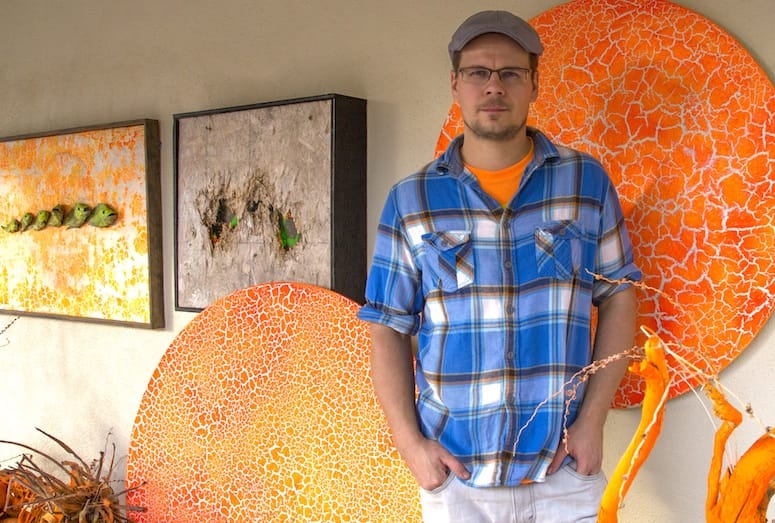 Sculptor Phillip K. Smith III never expected to use the deserted 1940s homesteader’s shack in Joshua Tree as a reflective and light installation.

“In that kind of shack, if it was raining outside, it would be raining inside,” Smith III says.

Yet, within weeks, Lucid Stead (pictured at right) went viral, gaining international media attention and attracting 400 attendees to his five-acre plot in the middle of nowhere. Responses ranged from stunned silence to tears. “Dry Heat” is a common term when talking about the desert climate.

All four artists will take part in a "Dry Heat” panel discussion from 4:30 to 5:30 p.m. Feb. 15 at the convention center. Immediately following the presentation will be a reception where attendees can casually meet the artists.

“We wanted to show off our best and brightest,” says curator Steven Biller, chairman of the Contemporary Arts Council at the Palm Springs Art Museum. “These are rough-and-tumble artists who have developed great dialogs with the desert.”

Biller says Smith III does an excellent job of harnessing desert light, while Cichocki is an activist with his day-glo installations of the Salton Sea.

“I want to create awareness so the decay of the Salton Sea is not out-of-sight and out-of-mind,” warns Cichocki. “Its toxic debris will affect all of us in Southern California.”

“They used to tie citrus trees to Joshua Trees to lure people to homestead the desert,” explains Biller. “It was kind of a joke, but these jackrabbit homesteads are part of our history and culture.” Stringfellow, who teaches at the San Diego State School of Art, Design & Art History, is best known for her photograph of a deserted trailer parked on Bombay Beach at the Salton Sea. (pictured at left)

“In one photograph, she illustrates the decay of the Salton Sea, its shoreline, structures and the community,” Biller adds.

“Don’t forget that it wasn’t long ago that the Salton Sea was a popular tourist destination and hangout for the Beach Boys and Frank Sinatra,” adds Cichocki.

The last of the “Dry Heat” artists, Scott Davis, brings a noir (black) vision to the otherwise sun-soaked desert.

“His night photographs of the desert are black and desolate,” Biller explains. “He creates an emotional response to the emptiness of the space.”

“We hope that ‘Dry Heat’ is an educational experience,” adds Biller. “Each of these artists has a narrative to tell, and they do it visually.”

For the Fine Arts Fair, Smith III will be displaying “Torus 6,” a precursor light piece to Lucid Stead. The technically complex acrylic light sculpture (named after a geometric term) captivates viewers as the colors slowly change.

With the “Torus” series, Smith III was able to refine his LED lighting and make Lucid Stead clean and streamline, without showing obvious clips or wires.

Smith III, with an educational background in architecture, currently has 23 simultaneous projects and employs a staff of five. He often creates large-scale sculptures for museums, towns and universities.

VIDEO: Take a tour of Phillip K. Smith III's studio, and see some of his newest pieces.