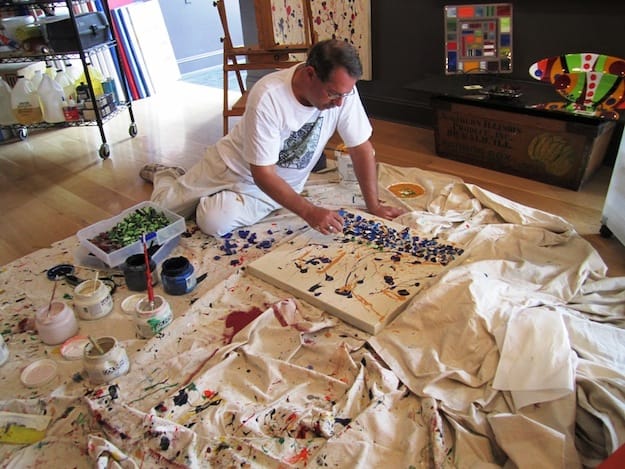 Joe Graziano can only stare at his own artwork for so long.

He needs another set of eyeballs on it.

“For me, it’s hard to be an artist and live in a vacuum,” said the Coachella Valley artist. “I can live in my own world and think everything I do is wonderful, but to have somebody else appreciate and be excited about my work has me energized more than ever. The wheels are turning in my head about the things I want to create.”

After more than 30 years in the agricultural business in Oregon, Graziano is now a working artist. He recently opened Studio 55 on El Paseo in Palm Desert where he creates and exhibits his acrylic paintings and glass work.

“My wife thought I was insane and that it was a wild, crazy idea,” said Graziano, “but having been an entrepreneur for 30-plus years, she was used to me coming up with ideas and dreams.”

Graziano and his wife, Hannah, made a permanent move to the Coachella Valley about a year ago after snow birding for three years. At the time he wasn’t thinking of opening a gallery. However, when Graziano moved his paintings from one storage space to another, he began thinking about his new neighborhood including El Paseo, one of the premier art gallery locations in the desert.

His entrepreneur stripes kicked in, and he decided instead of putting his paintings in storage that he would open a studio where he could share his art with the public.

Graziano said he’s not the type to analyze ideas to death. His philosophy in life has been to “go and do it rather than dwell on it, study it and wear it out until you don’t want to do it anymore.” So it wasn’t long before he found a storefront and his idea became a reality.

Situated in a plum spot adjacent to The Gardens, on the southeast corner of El Paseo and Larkspur, Studio 55 offers visitors more than an exhibition gallery. The space is Graziano’s main studio and where he can be found most days working on his next creation.

“People can come and talk to me,” he said. “It’s a win-win for me because if it’s quiet, I’m in my own wonderful world just creating my art and loving it and having a ball. And if people come in and want to engage in conversation and give me feedback, I’m all ears. So it’s a wonderful exchange.”

A self-taught artist, Graziano developed an appreciation for contemporary abstract art after years of visiting museums and galleries around the world. He first picked up a paintbrush in 1996 and created his first painting, “Pallet,” which now hangs in Studio 55.

Graziano works with acrylics and glass, separately and together, and has also recently starting making fountain pens out of exotic wood. He enjoys the diversity of his work.

“For me it’s about having different vocabularies,” Graziano said. “Some people speak different languages, and that’s kind of how I feel about my art. It’s multi-lingual.”

Graziano explained he wants to do more than one thing creatively and to experiment with styles.

“Even within my painting, there are different styles,” he said. “I have some vibrant, explosive acrylics on canvas, and I have a peaceful seascape or a serene piece next to it.”