Behind the scenes of the Palm Springs International Film Festival Gala 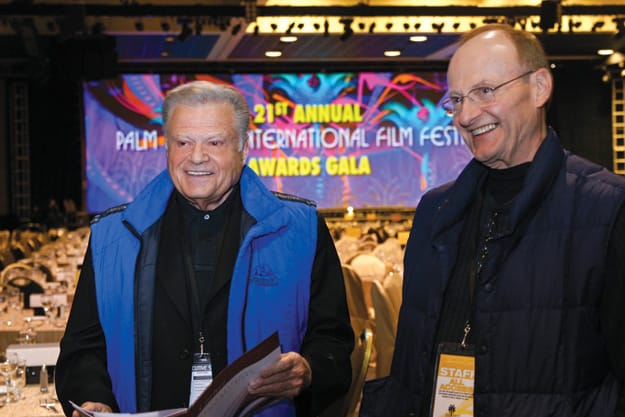 A little before midnight on Jan. 5, 2010, Richard DeSantis’ car takes over. He is expected at a (very late) private supper, but he’s been working some 21 hours.

“I was set to have a quick sandwich, but my car wouldn’t let me,” he says. “It just drove down [Highway] 111 and went straight home. It was out of my control.”

5 a.m.  DeSantis, executive show producer for the Palm Springs International Film Festival awards gala, sits in front of his computer, reading e-mails from Hollywood studio reps altering what their stars will say during the award presentations. The changes need to be transferred to the teleprompter script for the evening’s show. When DeSantis went to bed a few hours ago, he had whittled his e-mails down to 21. Now he’s got a hundred.

9 a.m.  A work crew is installing the Cartier wall (the sponsor backdrop for arriving
celebrities), and one person is vacuuming the 88-foot red carpet.

Inside, wearing his festival credentials around his neck, a black sweater, and dark blue down vest to ward off the morning chill, is DeSantis, who spent the night — or at least a few early-morning hours — in a room at the hotel next door. He worked late the night before and has been at the convention center for two hours the morning of the gala. He sits on the control platform — still on his computer. The previous night, master of ceremonies Mary Hart had joined him to rehearse her part and make script adjustments.

“Today will really be the toughest day, because I am still missing 40 percent of the commentary,” DeSantis says. And although he’ll be revising the script throughout the day, exper-ience tells him that “inevitably, there’s always people who wander in with a crumpled paper” with words that will have to be transferred to the teleprompter.

PHYSICAL PREPARATION of the ballroom began at 7 a.m. a couple of days ago with what DeSantis describes as “a small army” to install lighting trusses, build frames for video screens (a 20×66-foot screen flanked by two 18×32-foot screens), and position audio stations. By show time, the small army of 125 will grow to 400, including wait staff and volunteers.

“The last things will be getting the orchestra in the pit, stagehands in position, bar set up, and people out front for press arrivals and talent,” DeSantis says.

9:20 a.m.  Sound breaks out from the pit, where a piano tuner preps a new Boesendorfer. Tables covered with crinkled gold taffeta, silverware, and glasses await centerpieces. Backstage, workers tape string lights to the floor to guide stars to interview and photo op areas. Trucks pull up to the loading dock and begin unloading flowers and other table décor. Kitchen staff wheel carts of dishes and trays of salad condiments across the ballroom from storage to the kitchen.

10 a.m.  Suzanne takes you down to a place by the river … Leonard Cohen’s (recorded) voice drifts across the ballroom during the day’s first sound check. Flowers — 580 gardenias, 640 hydrangeas, and 150 cymbidium stems — cover a large area of the floor. Event planner Shari Kelley faced an unusual challenge in getting such an array delivered by Jan. 2.

“Every flower in California and Ecuador and New Zealand and Florida is going to the
[Jan. 1] Rose Parade,” she says. When flowers did arrive, a crew of 12 people worked eight hours a day cutting stems and putting together arrangements. Now 17 workers unpack linens, cover 1,450 chairs, build centerpieces with light boxes and flowers, and insert napkins into tasseled and gold-beaded rings. Kelley expects to be out by 4 p.m. (an hour before the doors open), but sees things running smoothly. “We could be out by 3 p.m.,” she says.

“We work on the award gala all year,” he says. “This year again we’ll raise over a million dollars.” In the few days before the gala, the focus is on seating, making sure major donors and celebrities are properly handled, and maximizing ticket sales.

“We’ll be working on seating three to four hours today,” says Matzner as the video screen behind him bursts into living color. “We hope to finish by 2 p.m. Some important press seating comes in late. We are generating a billion [dollars] in television and print impressions with this event.

“Eight or nine years ago, USA Today gave us a one-column, 3-inch article and two-thirds of the page to another awards event. Last year, we had two-thirds and that other event had a much smaller position.”

Matzner says he and others are involved in the festival to market the entire Coachella Valley. “This is the most powerful branding event that we have,” he says. “We have a great formula; that formula is a combination of star power and media reach that creates a franchise.”

10:30 a.m.  Local radio host Joey English begins rehearsing introductory announcements. Backstage, nine sound and audio engineers sit before a bank of monitors and consoles. They’ll be working throughout the day to set up the jib camera and ensure there will be no glitches in either sound or visuals. Eight stage managers will meet to choreograph the movement of people from backstage to stage and stage to backstage.

3 p.m.  Mark Richard arrives at Parker Palm Springs to coordinate departures for the red carpet. Honorees and presenters, as well as their managers and publicity people, are there. Richard checks credentials of the drivers who will shuttle the stars. Mariah Carey and her large entourage are partying in her suite. The front desk calls up to rooms 10 minutes before each celebrity needs to leave the hotel. Clint Eastwood is not at the hotel and will arrive on his own. “He’s very independent; he makes his own plans,” Richard says. More troubling is Carey, who has her own cars for herself and her entourage. “We let her people know ‘this is where you are going to need to be, and this is the time you need to be there.’ That’s as much control as we have over her,” Richard says.

5 p.m.  A phalanx of photographers watches the arrival of limousines from red-carpet ringside, ready to capture the smiling faces of Carey, Eastwood, Jeff Bridges, Quentin Tarantino, Helen Mirren, Morgan Freeman, and other celebrities. Non-celebrity attendees walk down a second red carpet, lined with greeters and one photographer. Once inside the ballroom, however, everyone feels like a box-office star. Colored spotlights cast an elegant glow on draped cocktail tables scattered among
an ice-sculpted martini bar, potted palms, and a red-and-white Cartier wall for guests’
personal photo ops.

6 p.m.  Lights flicker — a sign that guests should move to the dining area. Many have already scouted out their assigned tables. Despite the vastness of the room, the scent of flowers is discernible.

DeSantis never sits during the gala, even though he has ultimate confidence in everyone working to ensure smooth proceedings. He moves between the ballroom and backstage, monitoring video images, talking to the director — and to celebrities (the previous year, he got coffee for Morgan Freeman). Chatting with Carey, he becomes a little concerned that her tight dress, high heels, and relaxed demeanor may hamper her 78-foot walk across the stage. He asks “her security guy” to escort her to the microphone.

DeSantis later acknowledges that sometimes he is amazed that he is standing next to someone he has seen in movies; but, at the same time, he says, “They expect me to be telling them what they’re supposed to do, and I think that’s the secret in being good in this business. We all appreciate when we are in those situations that are well organized and somebody is able to direct us in a manner that makes things easy for us.”

6-9 p.m.  Gala host Mary Hart interviews the award recipients and honorees between her on-stage appearances. Representatives from Cartier host them
in a curtained VIP room. Audiovisual engineers keep their eyes on monitors
and their fingers on switches.

9 p.m.  Richard stands in the VIP area where all the cars and limos are staged, ready to take celebrities back to the Parker or, in the case of Mirren, to the airport. “The challenge is at the end, because everybody tends to come out at the same time,” he says. “Fortunately, some people come out earlier.”

9:15 p.m.  In front of the convention center, women in sleeveless gowns huddle near a heat lamp as valets race for cars. Some attendees are headed home, others the after-party at the Parker.

DeSantis has hurried off. “I am trying to beat everybody to the after-party — because that’s also my show — and make sure everything is squared away,” he says. Three years ago, security workers at the hotel barred him and Matzner from entering. “We had to find somebody to tell them he was chairman of the show and I was the producer,” DeSantis says, clearly amused by the memory.

10:30 p.m.  After less than an hour at the Parker, DeSantis is back at the convention center to oversee breakdown activities, including the lowering of the trusses to retrieve equipment headed to another show. “I was a little concerned,” he says. “We had a $97,000 Boesendorfer piano in the pit. I wanted to make sure that inadvertently nothing happened to it while we were doing all that movement of equipment.”

12:15 a.m. (Jan 6)  DeSantis is asleep in his own bed. At 7 a.m., he will be back at the convention center to load the remaining equipment and then will start setting up an opening-night party at Palm Springs Art Museum. Perhaps after that, he’d spend a week in bed.

You must be kidding,” he says at the suggestion a month later. “We had several video projects, guys going out of town, the closing-night party seven days later, and something in Florida.”

At the 2008 film festival, the directors of Little Miss Sunshine insisted on flying from New York the day of the gala to Los Angeles instead of Palm Springs (so they could sightsee along the way).

“I told them, ‘You don’t know if your plane will be on time. You will be driving in the dark,’” DeSantis recalls. “They got lost. We were get-ting close to the time they were to be on stage.” Someone affiliated with the film who was at the gala said, “Nobody’s going on without the directors.”

With five minutes to go, the directors arrived and changed clothes. Amid back-stage chaos, the orchestra extended an interlude by playing “Moonlight in Vermont.”

“Studio people were yelling at me, ‘Everybody [among the Sunshine directors] has to go on or we’re leaving!’” DeSantis recalls. “Everything fell into place at the last minute. I made a mental note to myself to never, never book anybody who has to fly in the same day.”

In 2010, every-one arrived in time and DeSantis, who has produced the gala for 10 years, is pleased.

“We were drama-less backstage,” he says. “When I do a show, the only drama that I want in it is out on the stage.”