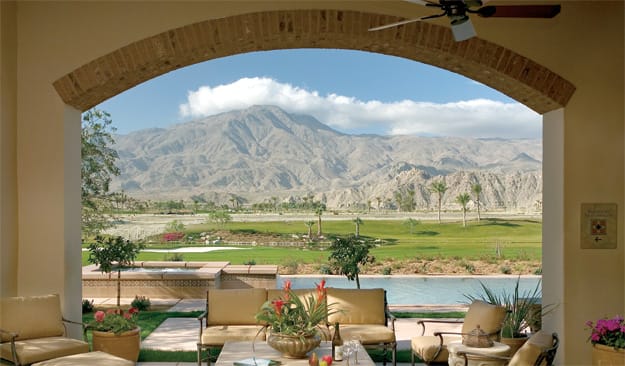 Don and Nuala Steinke spend half the year living on a game preserve in Northern Idaho. For their winter home, the wide open spaces of Andalusia at Coral Mountain in La Quinta provide an irresistible draw: remote enough to inspire country-style living yet only a 10-minute drive to shops and restaurants.

Golfers of all levels hone their skills on the first of two 18-hole Rees Jones championship courses, the renowned golf architect’s only design in the Coachella Valley (a second course will be developed soon). Hikers and bikers enjoy a scenic multipurpose trail that navigates Andalusia’s interior perimeter and passes over its Mediterranean-style entrance.

Known for its turbulent history and spectacular coastlines, the Andalusia region in southern Spain inspired this desert community. Principal planners for T.D. Desert Development traveled to the subtropical area on the Iberian Peninsula to gain a firsthand design perspective. What they returned with was a trenchant appreciation for the area’s vibrant culture and architecture. Throughout the La Quinta enclave, a rich palette of deep reds, greens, and golds pays homage to its Spanish influence. Serene fountains trickle in interior courtyards, brick-lined arched corridors provide cool passages; spiral columns and hand-painted stone mosaics lend an exotic touch.

If Andalusia is missing anything, it’s night blight: that orange glow from city lights that obscures everything but the brightest stars.