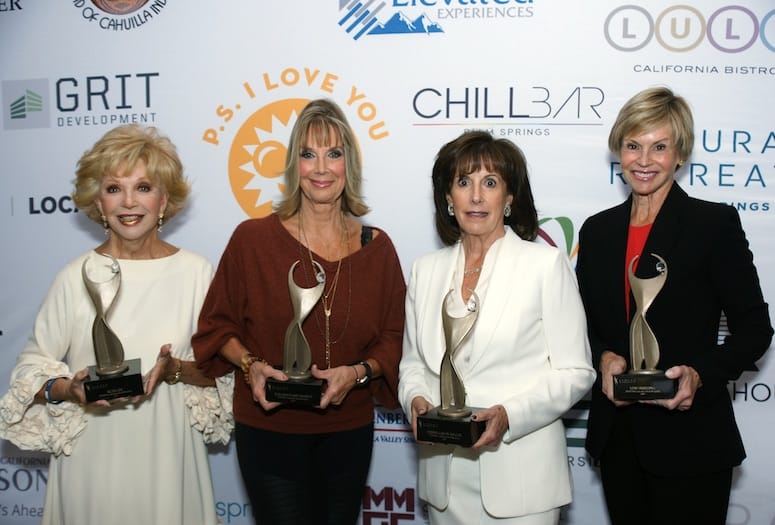 The Renaissance Palm Springs ballroom was fully decked out by Lulu Catering and Events for the holidays as it welcomed nearly 400 friends, family, and supporters of four fabulous Coachella Valley women to receive the Athena Award by the Palm Springs Chamber of Commerce. These awards have been presented for the last 33 years to women from the Coachella Valley who have made a difference by supporting the community with their generosity of time and talents.

Ruta Lee received the Athena Community Icon Award. Lee has loved Palm Springs since the 1950s and had served for 50 years as co-chair with Debbie Reynolds of the Thalians, an organization for the treatment of Mental Health at Cedars-Sinai Hospital.

Past Athena award winner Terri Ketover presented the Award for Community Leadership to Debbie Green Miller, show producer and talent booking agent for many nonprofit events in the community.

Martin Massiello, CEO of Eisenhower Medical Center, presented the Eisenhower Health Athena Award to Lori Serfling. Serfling serves on many board of directors throughout the valley. She is vice chairman of the Desert Arc Board and also has served on the boards of ACT for Multiple Sclerosis and Guide Dogs of the Desert.

The Athena Visionary Award was given to Judi Sheppard Missett, a prophetic influencer in the fitness industry, who is celebrating the 50th anniversary of her launch of Jazzercise.

A video presentation also paid tribute to Barbara Keller, a former Athena winner, who passed away in 2019.