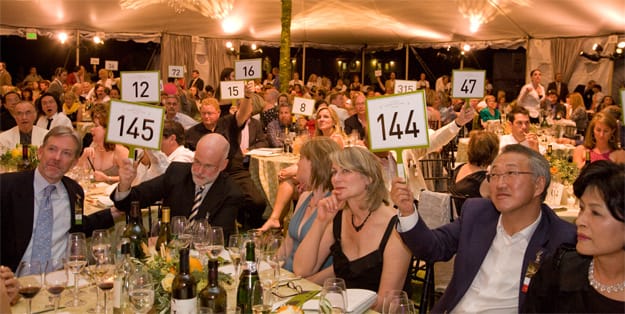 “The Asian market has been very thirsty for wine,” says Frank Martell, oblivious to his pun. The director of B&B’s wine department in Los Angeles, San Francisco, and Hong Kong and international director adds that it is “a point of speculation” whether they are buying the wine to collect or to drink. “This is a great place to harbor money,” he notes, “but a lot of people are drinking.”

The floodgates to the Hong Kong market occurred in mid-2007 when the government abolished import duties on wine. Several auction houses rushed to the scene, and Sotheby’s plans to debut a wine auction there this year.

“That commercial auctions are only for serious collectors is actually a huge fallacy,” Martell says. As he explains it, collectors who put top-end collectible wine up for auction also have wine they “kept around the house” for drinking.

“There’s no doubt there are deals to be had at auction,” echoes Robert Sleigh, vice president and head of Sotheby’s New York wine department. In addition to more mature wines, they may be wines that are no longer available in retail outlets and, if they are, typically cost 30 percent more retail. “You have to be prepared, though,” Sleigh says. “You have to know what you want, what you like, and what the market value is.” Sotheby’s has seen auction prices ranging from a couple hundred dollars for a case to a quarter of a million dollars (for a case of 1990 Romanée-Conti).

According to Sleigh, the wine auction market soared to new heights in mid-2005, when the best of the best leaped in value. “The premium end of the market went from $500 a bottle to $1,000 or $1,500 a bottle,” he says, adding that some even quadrupled in value. The trend reversed, however, in the second half of 2008, making it a good time for wine buyers to pick up a good deal. “We have seen a lot of discretionary sellers because they’re making money,” Sleigh says. “Now we might see people who need to liquidate assets and free up some funds.”

“As a novice collector,” Martell advises, “look at mixed lots.” A case of 1982 La Tour will cost considerably more than the sum of the bottles “because the opportunity to buy those together is fairly fleeting,” he explains. On the other hand, a case of mixed first-growth wines — such as a lot including a La Tour, a Lafite, and a Mouton — will be less expensive per bottle. According to Martell, a bonus for those who love wine but don’t have megabucks to spend on it is that “there generally is not a lot of competition for lower-end collectibles.”

Wine specialists at the auction houses offer advice by phone. “We welcome people to call us before the auction and tell us what they are looking for, how much they want to spend, and when they’re going to drink it,” Sleigh says. In addition to advising people on an imminent auction, “We might now about something coming up in a later auction,” he adds.
Martell offers these pointers for those considering wine-auction purchases:

• Look at the condition of the wines. Catalogs will announce their condition, but an auction house is happy to field questions, as they monitor and report on conditions all the time.

• Remember that there’s more wine out there. “People get their heart set on a particular lot and end up paying way, way too much,” Martell says. “It very seldom makes sense to chase something beyond the high estimate unless it’s so rare, so personal that you’re justified to do it.”

• Determining what to bid is easy. Unlike one-of-a-kind artwork, there are hundreds and thousands of cases of a particular wine, so there are very direct comparables and price histories that provide a reliable value.

• Know with whom you are doing business. “There are lots of counterfeits,” Martell cautions. “One of the main problems this industry faces is that it used to be only old wines were being counterfeited, which can be a difficult practice. It’s not easy to make a bottle look like it’s been sitting in the cellar 40 to 50 years and [perfect] nuances in the labels.” The tide has turned with advances in technology and as modern wines, such as 2005 Bordeaux and Burgundy wines, were released at higher prices based on a year of superlative weather. “Counterfeiting those wines is significantly easier than making a cork look old,” Martell says. Reputable auction houses take precautions to ensure authenticity, and that includes knowing with whom they are dealing.

Sleigh says Sotheby’s has a “very strict” system of vetting wines. “Providence is the most important thing,” he notes. “If there’s any doubt about it, we don’t sell it.”

He adds another tip: Purchase wines that will mature at different times. Of course, throwing a party that people will talk about for years could solve that predicament.

Charity wine auctions call for their own mentality. “In a fundraising setup, wines generally sell for a lot more than what the market commands,” Martell says. “It’s about how much you want to give the charity. Receiving wine is a bonus.”

The Desert Cancer Foundation in Palm Desert has been conducting a silent wine auction for the last four years. “We have rare as well as wines you can’t buy here because the wineries are small and you have to be on their waiting list,” says Executive Director Peggy Bilous. The top price paid at last November’s auction, which raised more than $25,000, was $1,300 for a three-liter bottle of 2006 Pax syrah, which the winning bidder opened at his table that evening. Other premium wines included pinot noirs from Kosta Browne and Sea Smoke and a 1970 Dom Pérignon.

Those interested in buying wine futures could do so at the 2008 Auction Napa Valley, which raised $10.35 million for charity. In addition to bottled wine, travel, private dinner parties, and other items donated by vintners, the auction included 128 barrels. And bids came from around the globe for 87 online lots.

Sonoma vintners raised $800,000 for charity in silent, live, and online auctions during its 2008 Wine Country Weekend. Wine bids ranged from $1,000 for a double magnum of Landmark Vineyards’ pinot noir to $25,000 for Chateau St. Jean’s day trip and wine dinner party for 50.