When the pandemic shut down production on filmmaker Baz Luhrmann’s Elvis in Australia, titular star Austin Butler retreated to his apartment for six months and literally surrounded himself with the King of Rock and Roll’s entire life. He would read (and reread) biographies and other material about Elvis Presley, jotting down every pivotal moment in chronological order.

“It was me keeping [the] entire timeline of his life in my mind,” the 31-year-old actor explains between sips of neon-green matcha. “I’d send Baz things [and] go, ‘This might be an interesting scene.’ But it’s hard. Whenever you try to sum up a human’s life in the length of a film, you gotta pick what moments you’re going to use.”

“There were so many scenes we thought about doing out there,” Butler acknowledges, “especially during that COVID shutdown where I had six months of just being in my apartment by myself and doing nothing but obsessing about this [role]. The script actually did change a lot during that time.”

Austin Butler will receive the Breakthrough Performance Award at the Palm Springs International Film Festival for his work in Baz Luhrmann’s Elvis.

Ultimately, to Butler’s dismay, Luhrmann and screenplay co-writers Sam Bromell, Craig Pearce, and Jeremy Doner opted against including Palm Springs in the already overstuffed film. However, that omission isn’t stopping the Palm Springs International Film Festival from lauding Elvis. This month, Butler will receive the fest’s Breakthrough Performance Award for his surgical, hip- swinging personification of Presley, an achievement that makes the California- born actor beam with pride. (When he’s in town to collect his trophy and mingle with fellow honorees, Butler hopes to finally visit Presley’s old haunts.) His connection to Palm Springs stretches back to childhood.

“I’ve got such happy memories there,” says a smiley Butler, who grew up in Orange County and made frequent sojourns to his grandparents’ timeshare at the Palm Springs Tennis Club, where he’d splash around in the pool and play pingpong with his family. “I’ve also had dreams of being an actor for so many years, so to now marry those two things is really special.”

Before production on Elvis began in 2020, Butler battled bouts of imposter syndrome over the monumental task of portraying the music legend in a movie by Lurhmann, a filmmaker Butler has revered since first watching Romeo + Juliet as a kid. However, on his second day on set in Australia, while shooting the scene where Presley performs his high-stakes 1968 comeback special in front of cameras, Butler experienced a transcendent moment of self-assuredness.

“At the end of the day, the only thing that matters is what happens between ‘action’ and ‘cut,’ so you’re just hoping that you don’t let everybody down,” Butler says. “I had that terror in everything, but that make-or-break feeling I had was the same thing that Elvis was feeling in that moment, so I could rest in the fact that fear wasn’t a bad thing. He was feeling it, too.”

“The only thing that matters is what happens between ‘action’ and ‘cut.’ ”

It wasn’t until the film premiered at the Cannes Film Festival and received a record- breaking, 12-minute standing ovation that Butler felt like he accomplished his goal, both in paying homage to Presley and solidi- fying himself as a serious actor after years spent toiling away in unfulfilling Disney, Nickelodeon, and CW projects in his youth. “I’ve been acting for more of my life than I haven’t been acting,” Butler says in a soothing drawl that exists somewhere between Southern gentleman and California surfer dude. 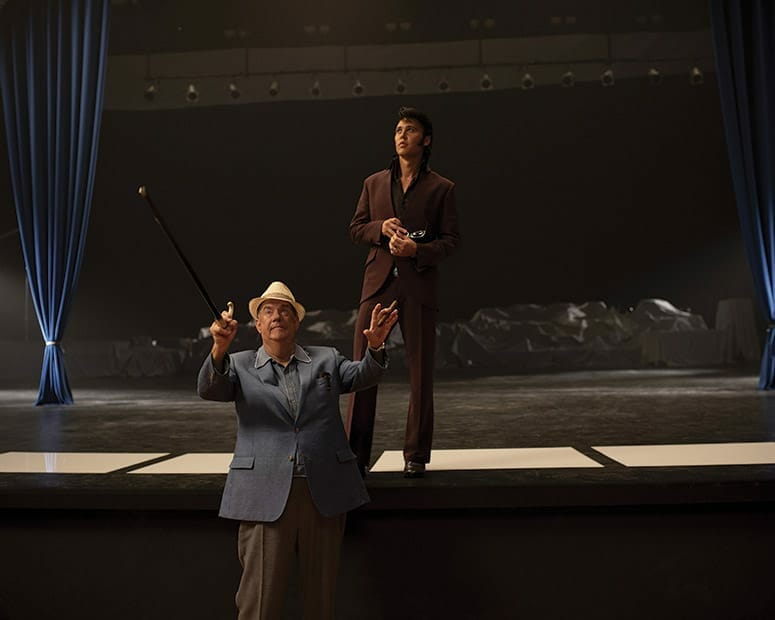 “I always had my sights set on a type of acting that I wanted to do, but a lot of the time, you’ve just gotta pay the rent and pay for gas, so I’d often do jobs [where] I tried to do my best, but they’re not necessarily what I would seek out.”

The turning point in Butler’s career came when he was cast in a 2018 Broadway revival of Eugene O’Neill’s The Iceman Cometh starring Denzel Washington, who became a mentor, acting coach, and hype man for Butler, whose acclaimed performance in the play led to supporting parts in Jim Jarmusch’s The Dead Don’t Die and Quentin Tarantino’s Once Upon a Time... in Hollywood. It was an unprompted call of support from Washington to Luhrmann that Butler believes helped clinch him the role of Presley.

Now, Butler is on the awards circuit for a seemingly inevitable Academy Award nomination, continuing to discuss a film that debuted last summer and started filming two years ago. No matter how many times he’s superficially asked about learning to thrust his hips — “I used to be a wallflower,” Butler admits — or donning Presley’s eccentric costumes, he never tires of reliving the once- in-a-lifetime experience.

“I always put myself back in the place of what it was like in the process of making it and the sheer terror that is involved in the responsibility of bringing Elvis to life,” the actor says. “There are so many ways it could have gone wrong. I remember the fear that if it didn’t go well, I would never work again, and now I get to talk to people who the film impacted and have seen it multiple times. It means so much to me.” 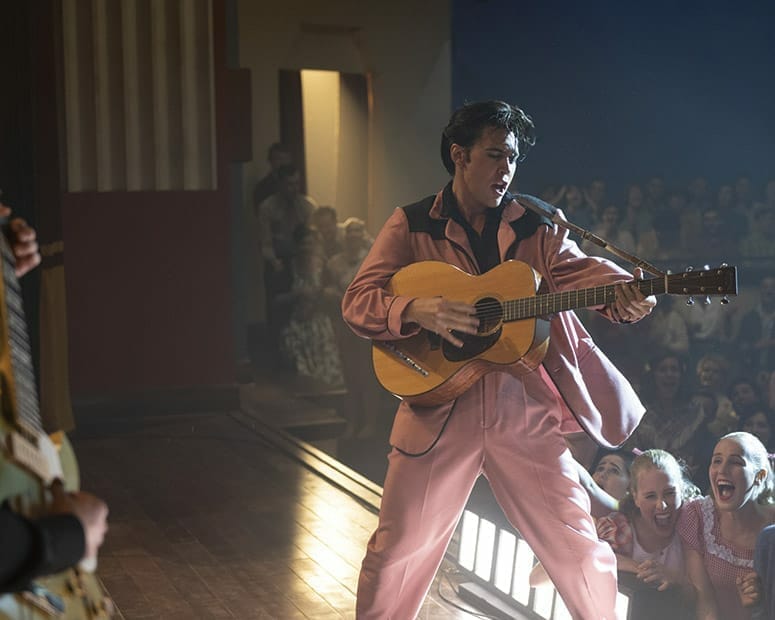 Butler is trying his best to navigate the upward trajectory. After promoting Elvis around the world last summer, he went straight into production on the sequel to filmmaker Denis Villeneuve’s Dune to play vengeance-seeking Feyd-Rautha, the part Sting memorably portrayed in David Lynch’s original 1984 cinematic adaptation of Frank Herbert’s sci-fi novel. Butler experienced a bit of whiplash jumping into the role alongside Dune stars Timothée Chalamet, Zendaya, and Rebecca Ferguson, as well as fellow newcomers Florence Pugh, Christopher Walken, and Léa Seydoux. The lengthy process of crafting Elvis spoiled him.

“It’s been interesting not having two years to work on something,” Butler says. “Prepping in the midst of working on something else is a whole other discipline. In the future, I may take more time between projects, so that way I can enmesh myself even more because I really enjoy that process. That’s the joy of it, getting to live in this other world.”

Butler will next be seen as World War II bomber pilot Gale “Buck” Cleven in the Apple TV+ limited series Masters of the Air, and he’s currently shooting the 1960s motorcycle club drama The Bikeriders, directed by Jeff Nichols and co-starring Tom Hardy, Michael Shannon, and Jodie Comer. When he considers the litany of famous names he’s worked and become friends with this year, Butler likens it to a surreal dream.

“I feel so fortunate,” the actor says. “I remember all the times in my life where I was auditioning for hundreds of things and not booking anything. Now, I get to be working with my heroes. I pinch myself every day.”