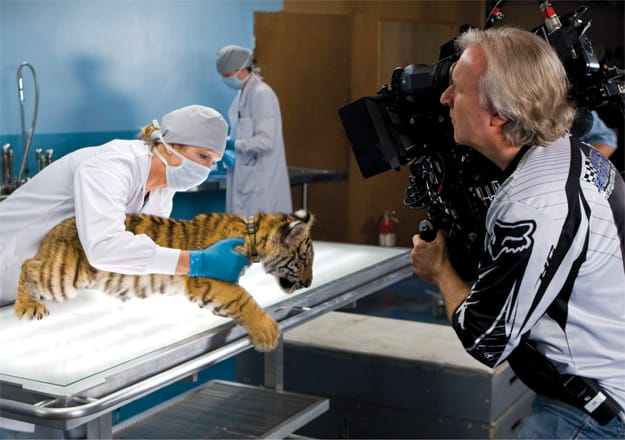 After being hired as head animal trainer for James Cameron’s Avatar, Kele Younger ended up with a role in the new 3-D movie that has been widely touted as groundbreaking in the film industry.

Younger runs The Magic Jungle cat preserve between Palm Springs and Big Bear and was hired not only to provide her Siberian tiger Misha for the movie, but also to work with two tiger cubs from a Michigan zoo.

After two days on the set, Cameron decided to give her a part in the film playing a genetic scientist. A former model who stands 6 feet tall, Younger was given a few one-word lines, which she spoke through a surgical mask. She recalls what happened after several run-throughs with a director.

“When they started rolling film, the boom comes in and I look up and that director was gone. It was James Cameron! My heart was in my throat,” she says.

For two weeks, Younger arose at 3:30 a.m. to make the 8 a.m. call time with the cats. The five-month-old cubs stayed at her preserve, where they had the run of the house and chewed her washer/dryer cords and where she trained them for working on a movie set. (Younger’s own cats have appeared in films, on television, and in magazine fashion spreads.)

“The cubs were not very well behaved when they got here. They were bitey,” she says. “Misha was awesome.” According to Younger, so was the legendary director.

“James Cameron could not have been nicer,” she says. “He was so much fun. He came over and sat down with us. He had his three kids and wife, and they were taking pictures with the cubs.”

Back at the preserve, the cubs made friends with Younger’s 4-year-old tigers (sisters Misha and Sasha) and her Rottweiler-Doberman, Toocrr (whom she rescued as a puppy and named for Thrown Out On Camp Rock Road). Although Younger’s leopards growled, the 450-pound tigers and 60-pound cubs “chuffed” at each other — a sign of affection. And Toocrr went for walks with the cubs.

“It was heartbreaking to take them back to the airport,” Younger says.