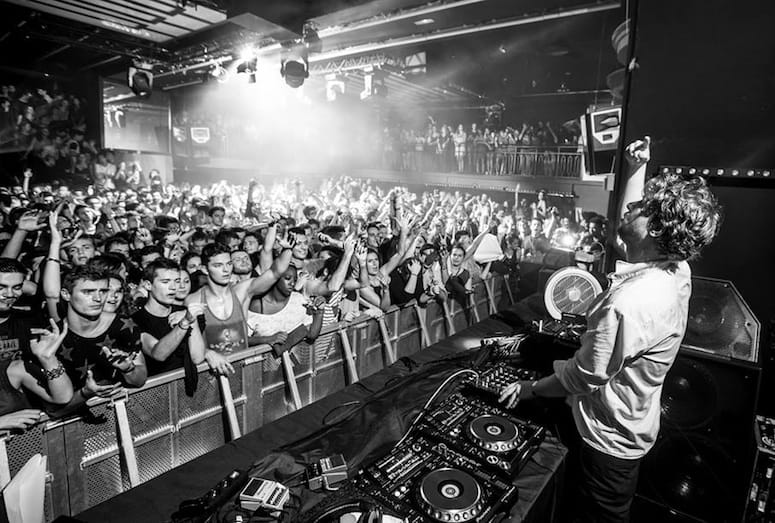 When it comes to making a splash, 23-year-old Dutch DJ Bakermat sure knows how to dive mix-first into the electronic music pool.

He’s garnered more than 17 million YouTube views (and counting) for Vandaag, a track also known as One Day, which features a sample of Martin Luther King Jr.’s impassioned “I Have a Dream” speech from the steps of the Lincoln Memorial in Washington, D.C. on Aug. 28, 1963 during the culmination of the March on Washington. “The speech was so beautiful, it’s kind of a piece of music in itself,” Bakermat explains. “It has a number of crescendos, and it’s almost like a classical music piece, you know? I wanted to remix that sample because it is so musical, so I looped it and played some piano chords behind it. When I had the whole progression, I built it up with the speech to make it even more intense. But I needed some kind of break after the buildup, and that’s when I came up with that saxophone part you hear.”

Born Lodewijk Fluttert in 1991, Bakermat understands the ongoing impact of Dr. King’s words and intent: “I see and read about what’s going on in the U.S., and it seems his message is still relevant right now," he says.

During a call from his home in the Netherlands, Bakermat discussed what he likes about California, how his live sets differ in Europe and the United States, and what his plans are for Splash House.

Growing up in the Netherlands, did you learn about California culture from the movies or the Internet?
“Yeah, yeah. I had a very romantic vision of California. I have to say that it’s actually true, most of the time — that it’s pretty awesome. It’s one of my favorite states in the USA.”

What do you like about it?
“The people. I just love the whole vibe there. The people are friendly and nice, and there’s a lot of good weather. It’s beautiful. The entire vibe of it — I love San Diego, and I love San Francisco. I just dig it.”

Do you wonder why you’re not there more often, especially when it’s winter time?
“I’m even thinking, ‘Why am I still living in Holland?’ — you know?”

You haven’t done Coachella yet, have you?
“No, not yet.”

That seems to be a next step for you on the festival circuit.
“That could be a nice next step, definitely.” Bakermat on preparing a set for en event: "You can’t really prepare for a set, I think. It’s always different.”

What do you think about Coachella?
“I’ve heard a lot about it, but like I said, I’ve never been there. I’ve seen some awesome videos of it on the Web, but I don’t know exactly what the fuss is about. But obviously it’s a cool festival because everyone talks about it, so I need to experience it someday. And maybe play there, too.”

What do you know about the Splash House event?
“The only thing I know is that it is in Palm Springs and that there is a pool, and that is literally all I know.” (chuckles)

Do you find the desert and Palm Springs area appeals to you?
“Oh yeah! Over [Memorial Day] weekend, I was at a festival called Lightning in a Bottle [at the San Antonio Recreation Area in Bradley, Calif.], which was also in a desert-ish area, mid-California, and I loved that! I mean, it was a really hippie-ish festival, but I really like that in a festival. Very free-form.”

Have you thought about what kind of set you’re going to do at Splash House?
“I never really prepare. Obviously, I download the newest tracks that I see on Soundcloud and Beatport that I really like, a lot of tracks that I think are cool. I put them in category maps depending on the beat and the energy, and I’ll see on the spot what I will do with them. You can’t really prepare for a set, I think. It’s always different.”

I know what you’re saying. For one thing, you have to take what the crowd gives you, and feed off of that.
“Exactly, exactly. That’s basically how you DJ — react to the crowd, and the right moment.”

Can you ever be “over-prepared” as a DJ? Do you know what I mean?
“I know exactly what you mean. A lot of DJs have a list where they know, ‘This is going to be the first song, and this is going to be the next song.’ Ok, yeah, cool, but for me personally, it’s way more exciting if you stand there, see the crowd, and respond.”

What kind of setup do you have when you DJ live? I’ve seen you have musicians with you onstage.
“I have different setups in the U.S. and in Europe, where I will do full band shows with a violin player, saxophone player, percussion, guitar, and piano. All of that stuff is going at the same time, which is obviously complex. Plus I have a huge soundcard on my table.

“For the live stuff I do in the U.S. right now, I’m playing with a saxophonist named Ben, and it’s very simple. I just play my DJ set. I have my USBs with music and I plug them into the Pioneer CDJs [professional DJ decks], and he plugs his saxophone into the mix, and starts jamming.”

I like that sound. A lot of what you do is so melodically based and you also use live instruments on your recordings, which helps gives your music a different feel than a lot of DJ sets that we see today.
“Yeah. Thank you. For me, the best way to do something original is to not follow the rules and just make something that’s my own. And the fun thing about performing with Ben is I really feel we have chemistry up there. I’ve been performing with Ben onstage for two years now. He gets me, musicwise, and I get him.”