"Ballroom" is a Lovely Little Musical About Living at CV Rep 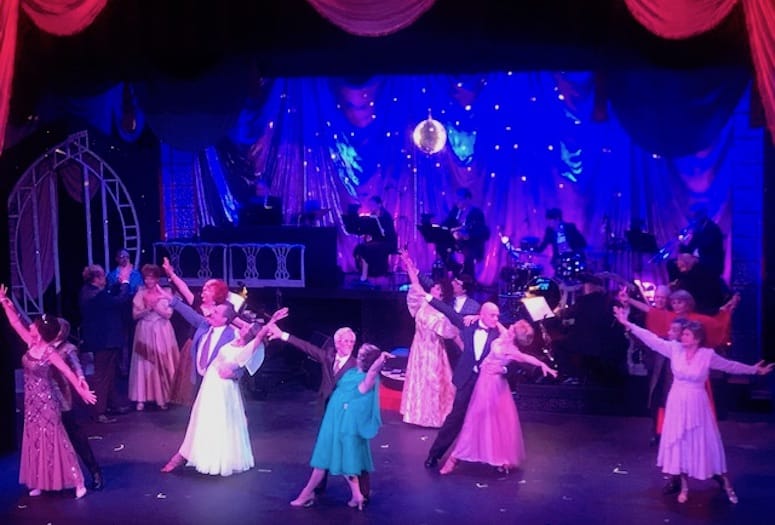 In 1963, Betty Friedan caused a bit of a ruckus…okay riot, when she wrote and published a book called The Feminine Mystique refuting the tired, and untrue 1950s TV June Cleaver homemaker trope by interviewing actual women. Were they happy? As it turns out, not so much. Some of them were content. And in the play Ballroom, that’s what Bea Asher was: content. She had popped out two kids with her Morrie, and her daughter Diane was married with a family of her own, and Bea’s son, David – well, he just gets her. That’s often how it is: daddy’s girls and mama’s boys.

But then Morrie died, and Bea had no idea how to be a ‘me’ instead of a ‘we’. She also didn’t know how to balance a checkbook, or pay bills, or make money for that matter. That was Morrie’s job.

Ballroom is Bea’s story, and if it were a serious play, it would ultimately explore a woman’s place in the world after her husband dies. To a minor extent it does, but at its heart, it’s a love story about a couple of seniors with obstacles to overcome.

Set in 1975, Ballroom’s book was written by Jerome Kass, with music by Billy Goldenberg, and lyrics by Alan and Marilyn Bergman. They have written a lot of lyrics in their time including The Way We Were. Their lyrics paint beautiful pictures and tell smart stories. They are thoughtful, unexpected, and meticulous in their choice of words. and this musical is no different. If it were a film, it likely wouldn’t get an Oscar nod, but maybe nominated for a Spirit Award. It’s a little bit The Best Exotic Marigold Hotel: The Musical.

So, here’s a quick rundown. Morrie’s gone, and Bea (a nice turn by Melodie Wolford) has an uncertain future ahead of her. Everyone wants her to sell her big old house; Diane (Aviva Pressman) thinks Bea should move in with her in Long Island – her girls love their grandma, and Bea will get to spend more time with them (aka a built-in babysitter); and Helen (Marcia Rodd) wants Bea to get an apartment next to her and her long-suffering husband Jack (Bill Lewis). They press and push her so hard, she finds her own voice, and kicks everyone out.

Bea looks for a job, but isn’t really qualified for anything. Several times she wishes she had gone to college, echoing Friedan’s position that women were either dropping out of college or foregoing it completely in order to marry and raise a family. Eventually Bea figures out a path forward, and takes her first step forward into her future by becoming a businesswoman. She opens her own store selling all of the things she had collected over the years that have been taking up space in her attic. 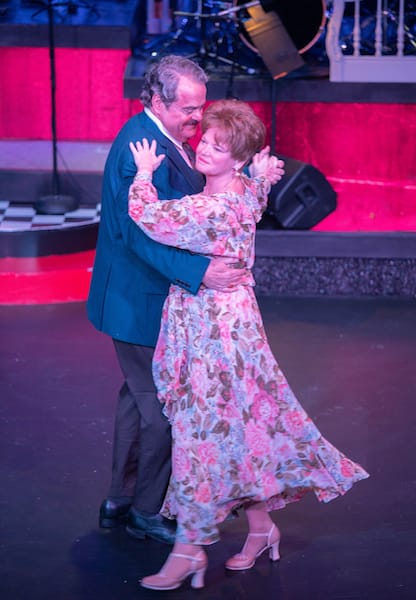 Melodie Wolford as Bea and Bill Nolte as Al meet at the Stardust Ballroom.

She has some very good friends who talk her into joining them at the Stardust Ballroom dancing the nights away, where Bea meets Al (a quiet and kind performance by Bill Nolte), a man who’s at the club often, but hardly ever joins in on the floor. He’s drawn to Bea, and tells her she looks like someone he could dance with, and they do.

Bea is enjoying her new life, and her burgeoning relationship with Al, when she comes home past midnight to find Helen, Jack, and Diane (David has moved to Los Angeles) worried and waiting in her home. Since Al is with her, she uses the opportunity to introduce him to her family and establish that he’s not going anywhere.

There’s a “hiccup” to the romance that some might consider a spoiler, so we won’t go there, but that’s basically our story. There are no real big musical moments that bring down the house, although When A Guy Really Knows How To Dance is a delight with a nice turn for Emily (Mary Ewing, who’s rich vocal tones pull you in), Angie (the thoroughly watchable and entertaining Teri Ralston), Pauline (a nice turn by Leslie Tinnaro), and Martha (the saucy Juliet LaPointe, who is reminiscent of a red-headed Ethel Merman).

Also the dances, choreographed by Jose De La Cuesta, are fun to watch. All of the numbers are well performed by a very seasoned cast. Quite a few of them have been on the Broadway stage, and it shows. Personally, I’m drawn toward the sassy characters that quip and kibbitz, like Angie, Bea’s bestie, who Ralston plays with lusty delight. Also a nod to Marcia Rood’s Helen, who is more of a Jewish mother hen than a sister. She’s wonderfully overbearing and delightfully offset by her husband, Bill Lewis’ Jack, who is the perfect foil to her busybodiness.

It’s a big cast, and with that many people on stage it could be mayhem, but Celona staged it well. Supporting players are solid with “Friends of the Stardust” and a standout comic turn by Douglas Graham as Harry “The Noodle.”That’s not to say that the others were not good; Mary Ewing, Rogin Somes, Alessandra Di Pierro, Randy Brenner, Joseph Mitchell, Corinne Levy, Glenn Rosenblum, Anthony Marciona and Nathan Holland all did splendid jobs, and the ensemble (Lois Bondurich, Wayne Hundley, Terry McLemore, Olga Morales and Lindsay Ouelette) rounds out the cast with fine dancing. 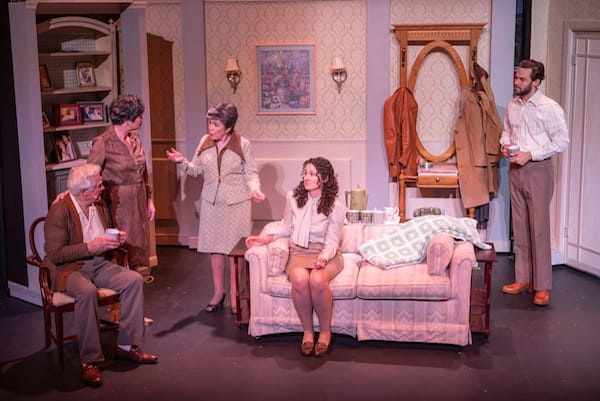 The family gives their two cents to Bea.

Jimmy Cuomo’s set is massive. Flats move up and down throughout most of the play, and while it’s initially fun to watch the mechanics, there are a few scenes that are so short it’s curious as to why director Ron Celona and Cuomo did not opt to handle those hefty scene changes with smaller set pieces. Cuomo’s no slouch when it comes to set design, so there’s no argument that the flats are well realized. But they did slow down the pacing. Additional props to prop master Nicholas Cox for the fine details in Bea’s home and her shop.

Although it makes its point, the musical is not deep, nor is it saccharine; it is a very human story about love and loss and coming out the other side. It features sassy women, the men who appreciate them, and lots of song and dance with well-written lyrics by the Bergmans. As Friedan wrote in her book, “Aging is not ‘lost youth’ but a new stage of opportunity and strength.” When all is said and done, Ballroom gets that point across while remaining a pleasant two hours of musical theater.