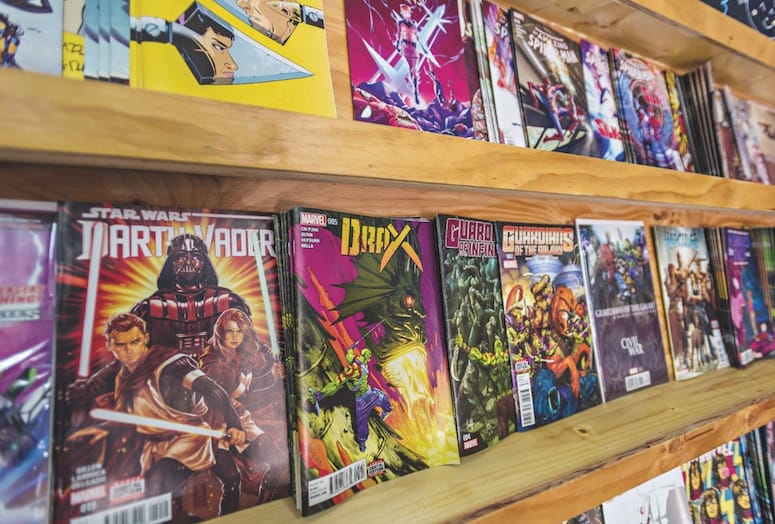 The first American comic books appeared in 1933, and they gained in popularity with the appearance of an alien named Superman.
PHOTOS BY NEIL HUSVAR

When I was in fifth grade, Mr. Campisi instructed our class to write two “really inventive” pages. My TV-addicted mind produced a massive good-versus-evil battle waged … on the kitchen table.

I called it “Batmilk and Sour Cream.”
In those days, kids my age frequently lost themselves in TV reruns of Batman and in reading comic books. Many of us still do.

Today, the characters of my youth are repurposed on TV in The Walking Dead, Arrow, and Supergirl. Superhero movies endure; Iron Man, X-Men, Captain America …

And they’re just the tip of Wolverine’s claw.

Sid Johnson works the counter at Desert Oasis Comics in Palm Desert. He should write the Wikipedia entry for comic books. After his “normal” career as a human resources professional was Hulk-punched by the recession in 2008, he found redemption in the comic books he had been collecting since he was 9.

“I took the last of my savings, opened up a store and I have been loving it ever since,” he says.
It takes a superhero like Johnson to keep current on comics. A part-Hispanic, part-African American Spider-Man now fights crime, somebody called Shang-Chi is a popular “Master of Kung Fu,” and, swear to General Zod, Thor and Wolverine are women.

The renaissance in such characters, Johnson believes, can be attributed to all those big-budget superhero films. “I think we’re seeing the second coming of comics,” he explains.

Adrian Cuevas Raya is 22 and owns Interstellar Comic Books & Collectibles in downtown Palm Springs. “Comic book stories are about things we cannot do in our ordinary lives,” Raya says. “It’s about super powers and adventures that we can’t have. … [It’s] like going on an adventure with a hero.”

He’s sanguine about the local market. “There are a lot of people here who are interested in comics. There have never been that many outlets here to satisfy people’s interest. Now, we finally have outlets.”

WHAT: A love fest for comic book culture. Events include a Zombie Walk and a CosPlay Contest ($1,000 grand prize).