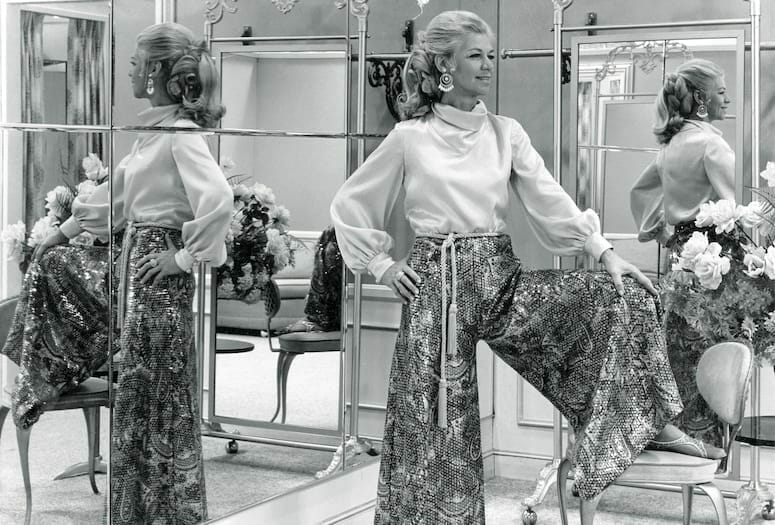 Some women are born into the limelight. Think Jackie Kennedy Onassis and Dorothy Chandler, both children of privilege who seemed destined to play a role in the cultural and philanthropic life of the cities in which they lived. Others, like Barbara Foster Henderson, grow into the role, though she was determined to make her mark as a 15-year-old. That’s when she left Walden, Colorado, which she describes as “a terrible little town,” and arrived in Palm Springs, where her father was a flight trainer at the Air Transport Command.

Landing in the Coachella Valley in 1941 with a pair of ice skates, her dream to meet movie stars came true on her first day in town when she and her father arrived at the Del Tahquitz hotel, where a banner proclaimed, “Welcome MGM.” In the lobby, she found Judy Garland and Mickey Rooney, who were in town to film Girl Crazy. Silent film actor (and Racquet Club owner) Charlie Farrell happened in and struck up a conversation with Barbara’s father, after which the two became fast friends. The next day, she joined a group from the Racquet Club on a horseback ride where she met Katherine Hepburn, Spencer Tracy, and her idol, Clark Gable. The starry-eyed teen had struck Hollywood’s mother lode. 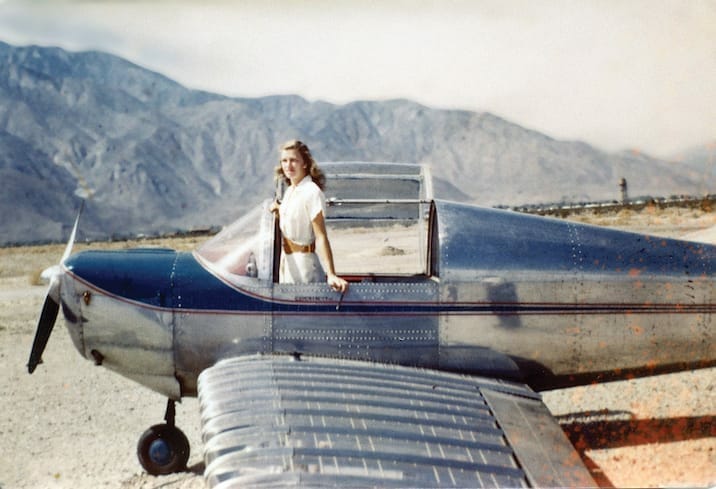 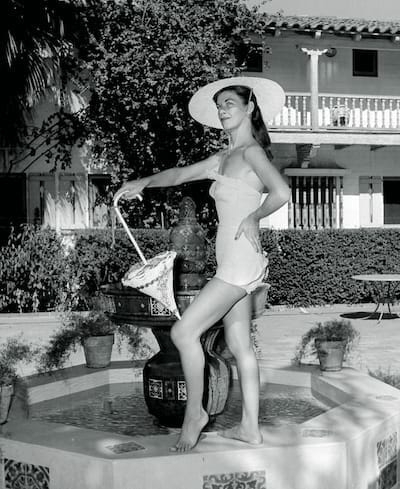 Barbara Foster at The Desert Inn circa 1950.

A standout among Palm Springs High School’s 200 students, Barbara was captain of the cheerleading squad and became chums with the children of Tinseltown royalty. But her most fortuitous high school encounter was meeting her future husband, Bill Foster.

After classes, she worked at the Plaza Theatre. “I took tickets, picked cigarette butts out of the sand, flushed the toilets,” she says, “but most of all, I was amazed that there was an 800-seat theater in the middle of this little town.”

Later, working at Desmond’s, one of the valley’s swankiest department stores, she met her fair share of memorable people. “One day, a Model A pulled up, and a guy got out wearing a felt hat but no shoes. As I walked him around the store, he said, ‘I’ll take three of those, four of that, two of those.’ None of the other salesgirls knew who he was, and [they] warned me that all the merchandise was going to come back. The only thing that came back was the customer, who turned out to be Howard Hughes.” Due to the commissions on his purchases, she wound up earning more money than her father. 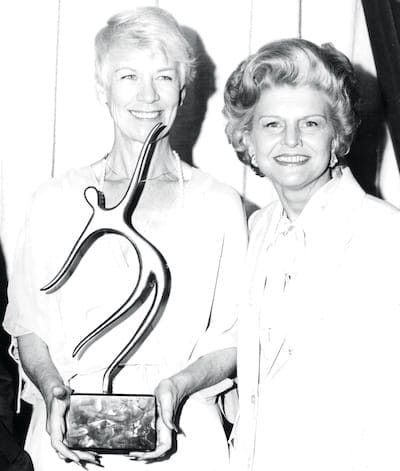 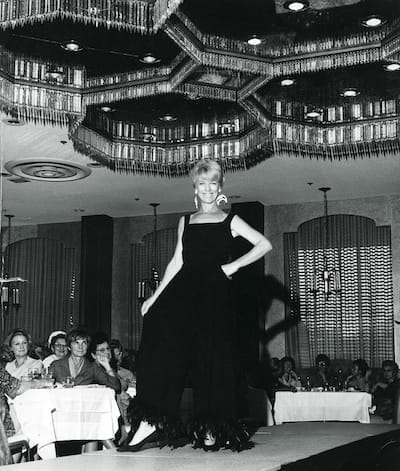 Barbara Foster on the fashion runway at El Mirador Hotel in the 1960s.
Desmond’s got her into modeling, and before long, Barbara opened Mademoiselle, her own modeling school. Palm Springs needed models for the numerous fashion shows taking place at its 36 clothing stores as well as charity events held at a growing number of country clubs, where “the golf widows were as bored as hell.” 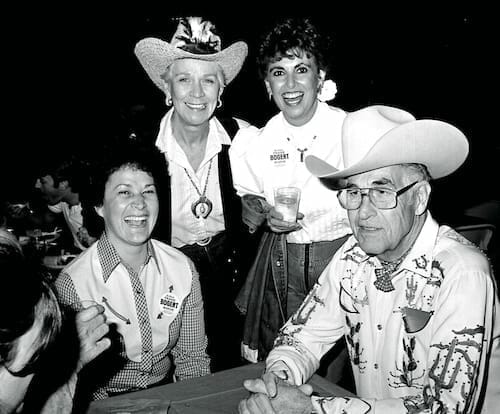 Among her stable of beauties was the future Mrs. Frank Sinatra, Barbara Marx. Foster Henderson parlayed modeling into a stint as fashion editor of The Villager, the forerunner to Palm Springs Life magazine.

At the age of 19, four years after arriving in Palm Springs, Barbara married Bill Foster. A second-generation builder, whose clients included Walt Disney, Dinah Shore, and President Gerald Ford, he served on the city council before being named mayor in 1974. “Because of Bill,” she says, “I was tied to this community like nobody’s business.”

Not one to sit on the sidelines, Barbara blazed her own trail. Her contributions to Palm Springs are only outnumbered by her colorful stories. They include founding the Desert Symphony, the Center Theatre of the Performing Arts, and the Crafter’s Cottage restaurant in addition to owning the Cork & Bottle liquor store (where Liberace was her best customer). She worked tirelessly with the Welfare and Friendly Aid Society, which was founded by Nellie Coffman, and most famously, on the Palm Springs Walk of Stars, which Barbara envisioned as a tribute to a limited number of honorees. Although she received her own star in 2015, she says, “I gave up on the whole thing when they gave one to Tarzan’s chimp, Cheetah.” 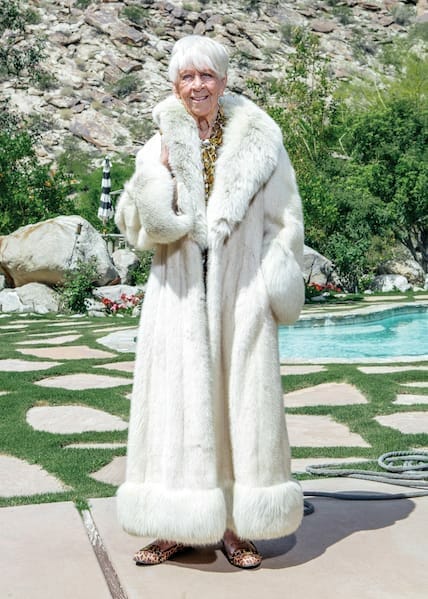 Now 96, Barbara Foster is about to release a video memoir.

In 1992, after 47 years of marriage, her beloved Bill died. A few years later, Ginger Rogers introduced Barbara to her second husband, the late Harry Henderson. She confesses, “I fell in love with him that night, dancing with him.” They were married for 19 years.

Through it all, the ice skates she brought with her never gathered dust. She skated, often with Truman Capote, until she was 75 years old. And while Barbara finally hung up her skates, she has never given up on life. Still spry at 96 years old, she’s not only seen it all, she’s about to tell it all in her video memoir, Life Among the Stars.

When asked what she’d like inscribed on her tombstone, she doesn’t hesitate to answer: “She had her nose in everything.”