Captured with all their verve and charm by celebrity photographer Michael Childers, Barbara and Nelda show why they were the original valley girls.
PHOTOGRAPHS BY MICHAEL CHILDERS

Barbara Sinatra’s signature cocktail — at least late in life — was coconut water, a jigger of Grey Goose, and an olive. No ice. She adored Rocky, her mustard-colored macaw, who sometimes sang along to Frank’s music (and perfectly mimicked his cursing). Her favorite color was peach; it was everywhere in The Club at Morningside home she lived in for 17 years — her bedroom walls, her linens, the cozy club chair next to the ballet barre. This was where she stretched every morning, doing the same exercises she’d done as a showgirl at the Riviera Hotel in Vegas in the 1950s where she met her second husband, Zeppo Marx.

These homey little bits and glimpses are the kind of things only a close friend would know. For Barbara Sinatra, that friend was Nelda Linsk, a longtime real estate agent in the valley who met then Barbara Marx in the fall of 1965. The two frequently played tennis together (and sometimes modeled) at Charlie Farrell’s star-studded Racquet Club. It was Linsk who, two years after Frank Sinatra’s death, found the home on the country club fairway that Barbara loved. And now, just months after Barbara’s passing in July, it was Linsk who was selling her dear friend’s Morningside property — with a very heavy heart.

“The first time I walked in the house and she wasn’t here, it was very hard,” Linsk says, opening the shutters in the bedroom, which looks across a small pool framed by two weeping willows. Standing at the window, she says, “Barbara loved this view. The lake, the weeping willows, the mountains. It’s why she bought the house.”

In 1995, Frank Sinatra, in ailing health, reluctantly sold “the compound” on the 17th fairway of Tamarisk Country Club, where he’d lived since the mid-’50s (Linsk also brokered that deal — to Canadian businessman Jim Pattison), and moved to Beverly Hills. After his death in 1998, Barbara was hesitant to move back out to the desert. One day, the two friends got together for a visit to the Living Desert Zoo & Gardens. Afterward, Linsk told her lifelong friend about a house at Morningside that had just come on the market. “Barbara said, ‘Let’s go look at it right now.’ So I called the agent and he met us there, and two days later she bought it.” 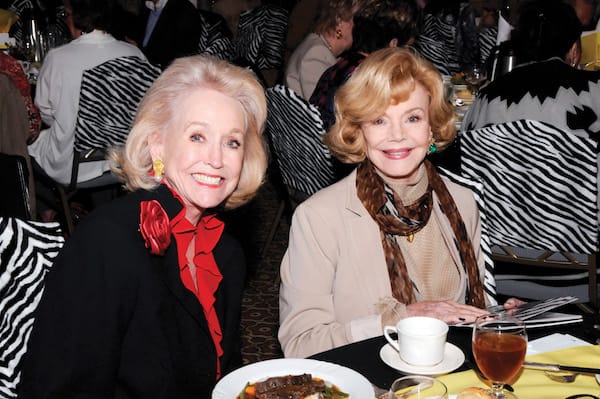 Nelda and Barbara attending one of the endless number of luncheons for charity.

Frank wasn’t there — and yet he was. He was present at the front door Barbara had painted orange (his favorite color); in his abstract paintings that hung throughout the house; even in the black lacquered box with his familiar signature in gold. Inside the box was a half-empty bottle of Jack Daniel’s, a gift from the Tennessee distillery that always sponsored his Celebrity Invitational golf tournament. And, of course, there was always Rocky, singing along to Ol’ Blue Eyes whenever Barbara played his music during parties.

“We had so much fun in this house,” says Linsk wistfully, as she moves from room to room, opening white shutters to let in the light. “She’d call me up at work and say, ‘My bar is always open — stop by.’ And since my office was just 10 minutes away, I’d drop by and we’d have cocktails and then she’d say, ‘Well, stay for dinner!’ ” Linsk pauses for a moment, her eyes welling up. “Barbara and I went through so many things together.” She shakes her head and smiles. “God, the stories I could tell.”

When asked to elaborate, Linsk, in her still-noticeable Texas drawl, says, “Like I said at her memorial service, I have a lot of stories about Barbara. Some I can tell and some I can’t tell.” One she’s willing to share is the time Barbara, who was always trying to lose weight, wrapped herself in saran wrap, hopped in her Jaguar, and drove to her Malibu house, where Linsk was waiting. “When she arrived, she was about ready to pass out. I told her it was the dumbest thing she’d ever done. It took me an hour just to unwrap her. And then we laughed about it for the next two days.”

Another favorite memory is the time Barbara was hosting a party at her home, and Nelda, perfectly coiffed and dressed, fell in the pool while holding a glass of wine. “When they pulled me out, I looked like hell; my hair was wet and limp, my dress ruined. It was a disaster! And Barbara just laughed! She thought it was the funniest thing she’d ever seen. Fortunately, we had the same taste in clothes and were about the same size, so she took me back to her bedroom, dried me off, and told me to pick anything I wanted from her closet. I should have taken that dress home and kept it to pay her back for laughing at me.” 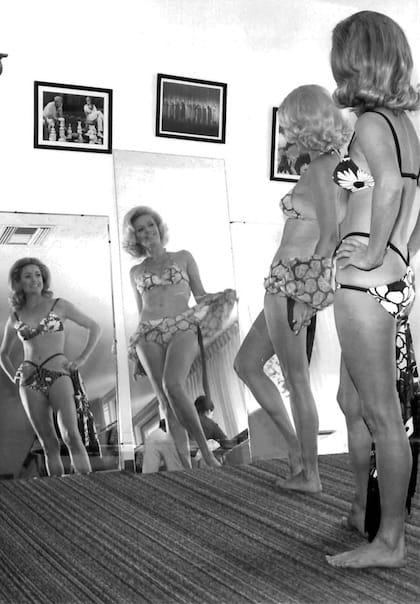 The two friends pose in rather daring swimsuits at The Racquet Club.

Back in Barbara’s bedroom, Linsk picks up an embroidered pillow that says “Beauty Is the Promise of Happiness to Two Beautiful People.”“They really were a true love affair,” she says of Barbara and Frank, who were married for almost 22 years. “They’d always have these big dinner parties at the compound, with several tables holding 10 people each, and Frank would sit at the head of one table, and Barbara would be down at the head of another table, and he’d blow kisses to her from across the room and mouth, ‘I love you!’ ”

Of course, she admits, they had their bad times. “Usually caused by a little too much Jack Daniel’s. But they loved each other until the day he died.”

It’s almost time to lock up the house, but before we go, Linsk has one more story to tell. It’s about a black-and-white photo — probably taken 50 years ago — that she uncovered recently and showed Barbara shortly before her death. “It was taken at Charlie Farrell’s house at The Racquet Club,” she says. “We were modeling swimsuits — bikinis — and the photo was taken in front of two full-length mirrors so you saw us from the front and the back. I showed it to Barbara and said, ‘Look, that was us! Do you believe it? We were really hot!’ ”

Linsk smiles and nods at the memory. “And we were.”