Barry Bostwick shares back stories during a screening of The Rocky Horror Picture Show, which will be celebrated during a special event Oct. 9 at Agua Caliente Resort Casino Spa in Rancho Mirage.
PHOTOGRAPHY COURTESY THE ROCKY HORROR PICTURE SHOW

There are cult films and then there’s The Rocky Horror Picture Show. Since its release in 1975, the film adaptation of the stage hit The Rocky Horror Show has taken on new life as the very definition of a cult film. For the uninitiated, the story chronicles Brad Majors and Janet Weiss (Susan Sarandon) who, after a flat tire, encounter a creepy mansion owned by Frank-N-Furter (Tim Curry), a transvestite (the film’s terminology) scientist who is creating the perfect man, and his deranged staff, which includes unforgettable characters played by Meat Loaf, Richard O’Brien (who wrote the music, book, and lyrics of the stage show), and Patricia Quinn.

Filled with memorable songs like “Science Fiction/Double Feature” and “Time Warp,” The Rocky Horror Picture Show, not a hit upon its initial release eventually developed a devoted following among college students, who showed up at midnight screenings dressed as the film’s character and reenacted scenes in front of the screen.

One of the reasons for the film’s continued success is the unimprovable casting of every single character, including Bostwick. The actor has one of the most diverse resumes imaginable, scoring three Tony Award nominations, and becoming a ubiquitous presence on big and small screen with appearances in Charlie’s Angels, director Stanley Donen’s final musical Movie/Movie, another cult film Megaforce, winning a Golden Globe for the miniseries War and Remembrance, and playing opposite America’s sweetheart Betty White twice in The Golden Palace and Hot in Cleveland. 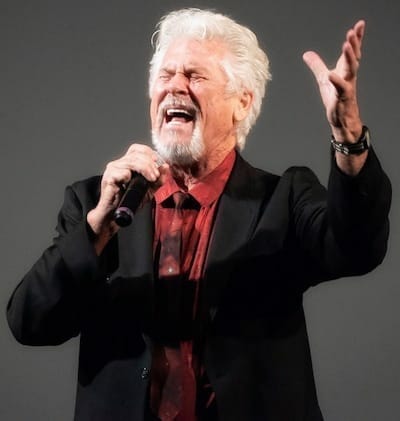 On Oct. 7, Bostwick will host a screening of the beloved horror musical and pose for and sign photos at Agua Caliente Resort Casino Spa Rancho Mirage. The film will be shown with a shadow cast enacting the action onscreen, as well as a memorabilia display with artifacts, a costume from the movie, and a costume contest.

In his conversation with Palm Springs Life, Bostwick chats about his relationship with the enduring cult film, originating Danny Zuko in Grease, and working with Betty White.

What can audiences expect from your upcoming Rocky Horror Picture Show screening?

I always think of it as we're just throwing a party. My character Brad says in the beginning of the movie when he goes into the castle, Janet says something like, “Let’s get out of here” and Brad says, “It's just a party, Janet.” And that's what I consider these screenings to be. We have shadow casts that are wonderful, enthusiastic, and keep the audience on the edge of their seats, and there’s prop bags for people to throw crap at us. There are plants in the audience who tell the virgins what to yell at us. I think ultimately, it's just a big party. It’s like, I think one of the original producers said it's like a rock and roll concert with a bit of a script.

Why do you think the film is still packing theaters?

It continues to affect people in a very positive way. But besides that, besides the fans who see it over and over and worship the movie, there’s this whole other half of the audience that had never seen it before. They are in the third generation, and they have lived this long with everybody saying, “You haven't seen it yet? What's wrong with you? This is the greatest movie ever made.” And so, they go and participate in this invocation and inoculation and invitation of becoming part of the congregation. And hopefully, they will have fallen in love with it as all of us have over 47 years and come back and see it on the 48th year.

I presume you saw the stage production before making the film. What was your opinion of it?

Yes, it was loud and raucous and rude and everything that I was attracted to then. I was from the theater, and I had done some off-off-Broadway and off-Broadway things, also. I was always attracted to the weird and wacky and different. I never wanted to do Oklahoma. I wanted to do things like The Rocky Horror Show or Grease, which was way different for its time, and that genre of music was just being re-explored. So, we saw Tim in the show, and we saw Meat Loaf do it in L.A., and we had a couple other friends in it. Also, the casting director was a very good friend of my manager and he put me and Susan together and presented us together to the studio and the producers. Susan and I went in together and I think that just sealed the deal because we just looked perfect for the parts. 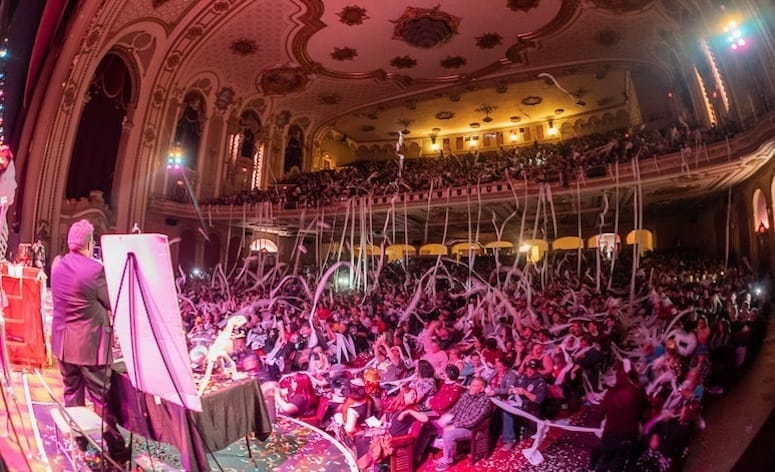 Barry Bostwick describes the evening “like a rock and roll concert with a bit of a script.”

The film was made just a few years after the Stonewall Riots. Was there any discussion about making such a queer-positive movie?

There really wasn't. I mean, it was just a goof, a send up. The themes had been explored in other films and other stage shows at the time. And I guess it was all just so much a part of our history and so much a part of our personalities that none of us thought of it as anything peculiar. If you know Richard O'Brien, I mean, he was peculiar back then and he continues to be peculiar. Brilliant and peculiar. And as I said, I was always attracted to the peculiar. So, I think that’s really what it was, and I don't think we were blazing any new trails. We were just solidifying a trail that was lightly tread at that point.

I can’t think of a film from a major studio that had an openly trans character as the lead before this one.

I don’t know if there was. I mean, I know that there have always been gay characters, but whether there was a trans, I don't know. I've never really explored that. And if it could be put on film, let’s do it. Let's do it the best we can, and obviously with the least amount of money, we could do it with. But Jim Sharman, the director at one point, was offered a lot more money to make the film if he would cast real rock and roll stars in it. And he refused. He said, “No, we’ve got to keep the people who were in it originally.” That’s the sweet spot for the show. 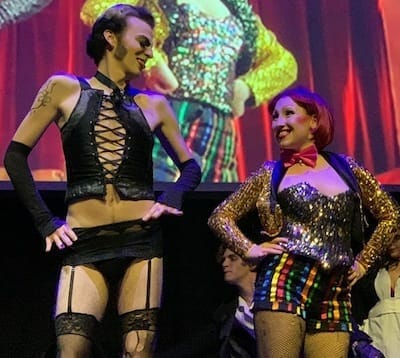 Did you get to see the film before it developed the cult following?

I think there was an opening in London, but I didn't go to because I wasn’t invited. I think the general cast feeling was that it’s slow and not as dynamic as we thought we were making. Thank God there were these pauses, because it gave the audience time to interact with us. I think I finally saw it with an audience in L.A. I think I saw it with audience participation, yeah, because they were the cast of the Tiffany [Theatre in West Hollywood, where the film played from 1977-1983] invited me down. They presented me with a gold record because the soundtrack had gone gold, and I presented them with a pair of my underwear signed to the entire Tiffany cast. And ever since then, I’ve just had so much fun with it.

I’m sure you’ve encountered some hardcore fans over the years. What do they say to you?

It’s usually, "I've seen it over a hundred times. I've played every character in it, and I like playing Brad the best." Then I say, "You're a lying asshole." [Laughs.] I say that because who wouldn't want to be Frank-N-Furter instead of Brad? And if these people weren’t standing in front of the former-Brad Majors, I’m sure they would be saying something else.

You originated the role of Danny Zuko in Grease. The show started at a small theater in Chicago and was much darker. Did you guys have any idea that it would have such longevity?

And if you go to your local elementary school where it’s now being done, that’s another whole level of clean. The people who are very wise, the producers and Jim [Jacobs, Grease’s composer-lyricist-writer] and all the people who created it, in that they have kept this thing alive on so many levels where it’s acceptable in so many venues. And John and Olivia were just spectacular in the movie. I had my reservations about some of the stuff in the movie, but you can’t fault their charm and their talents. 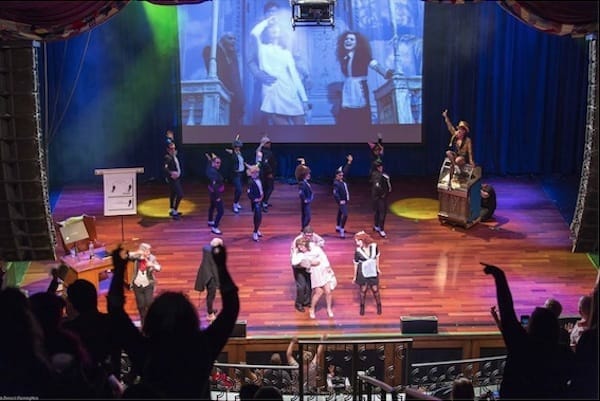 I recently caught your performance as gigolo Nick DeCarlo on The Golden Palace, the spinoff of The Golden Girls. What are your memories of working with those ladies?

I remember being in a Speedo and not being embarrassed for some reason. And then when I worked with Betty White on Hot in Cleveland, she said to me, “Oh yeah, I remember you from the other show in your Speedo.”

I think that was one of my performances that was a bit over the top, trying to keep up with the comedy chops of everybody there, but it was great fun. And just to work with Betty a couple of times was such a joy in my life.

Let’s end this on a very superficial note that Frank-N-Furter would likely approve. You’re 77 years old and you look fantastic. What’s your secret?

I have two kids who are still in college, a wife who is telling me I’m sexy, and I still have all my hair. That’s all I can think of.