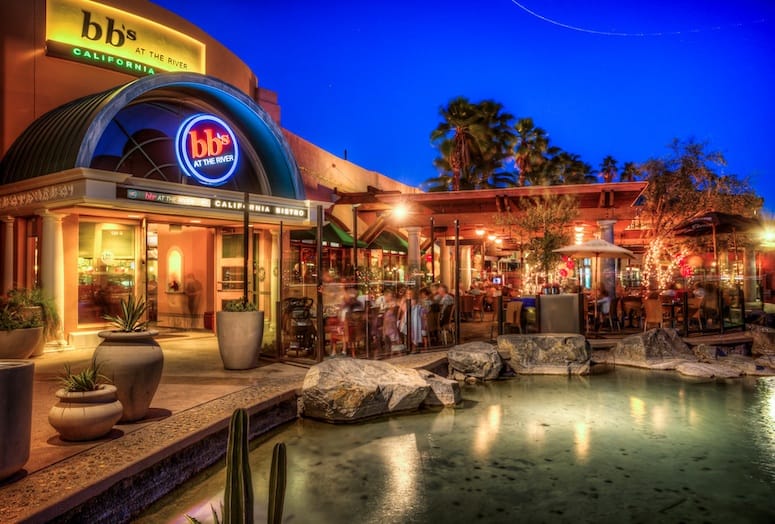 Best thing about summer in the Coachella Valley? Getting into restaurants without a long wait, summer specials and discovering all the new places that opened during season.

To entice locals into his newest eatery, Jack Srebnik is offering summer diners a trio of reasons to try bb’s at The River, in Rancho Mirage.

The three-course prix fixe dinner comes with a selection of entrees ($19.95, 4-6 p.m.; $22.95 after 6 p.m.). Unlike most prix fixe menus, other selections from the regular menu are also available, “There’s an upcharge, but if someone wants the salmon we’re not going to say no,” Srebnik says.

There is also an all-day everyday happy hour through summer, with $2 off drinks and discounts on bar menu items in the bar. The menu includes appies, sandwiches and burgers.
On weekends from 10 a.m. to 3 p.m., bb’s offer brunch with a menu of egg dishes and omelettes, croissant or challah French toast, and Hawaiian Portuguese-style sausage or turkey jalapeno sausage. Barbara Boyajian and bb's at The River Manager Anthony Nespoli at bb's at The River. Owner Jack Srebnik named the restaurant after his backer. "She said she always wanted to see her name in lights," Srebnik says.

Srebnik opened bb’s (named for backer Barbara Boyajian) in April, his fifth restaurant in the Valley. “I think it’s the 18th restaurant I’ve opened in 25 years,” he says.

After closing his popular 17th Street Café in Santa Monica last year, Srebnik decided to bring Chef Carlos and menu to the desert for bb’s. He chose the anchor spot at The River for its mid-valley location. “It is one of the best spots in the valley,” he said of the patio that offers his guests’ unobstructed views. The pot roast is moist and fork tender and a pan gravy made with demi glace and a subtle beefy taste. It's a perfect 1950s roast that some of us can recall from our grandmother's kitchen.ere.

The menu is California bistro with nods to comfort foods like the 1950s style Pot Roast, with fork-tender beef, brown gravy, carrots, potatoes and crisp green beans. Appies include Ahi Tartare, stacked with a layer of creamy avocado, chopped tomatoes and topped with shredded daikon radish. The Kalbi beef ribs are savory bits of cross-cut short rib meat with a fresh shredded slaw and a soy-based dipping sauce. And the house-made chicken, spinach and cheese raviolis are enough for a light lunch or dinner. This item is also available in a full entrée with veggies for dinner. Northern halibut on a bed of sauteed veggies and served with new potatoes, steamed asparagus. Jack Srebnik transplanted the recipes and menu at bb's at The River from his popular Santa Monica restaurant, the 17th Street Cafe, which closed in 2014.

Signature entrees include the Balsamic Grilled Atlantic Salmon served with sautéed veggies and a balsamic reduction; Roasted Lamb Loin is rolled with spinach, pine nuts and feta; and the grilled vegetable tostada is piled high with guacamole and sun-dried tomato relish. There are also vegetarian dishes, steaks and chicken dishes, with sandwiches, burgers, pasta dishes, entrée salads, and house-made pizzas. Refreshing for a summer evening, the bb's Mule is made with New Amsterdam Vodka, Bundaberg’s Ginger Beer and Blood Orange sodas.

Restaurant manager Anthony Nespoli has designed a menu of classic and signature cocktails like the bb’s Mule, made with New Amsterdam Vodka, Bundaberg’s Ginger Beer and Blood Orange sodas. The signature margarita comes with muddled cilantro and cucumber, El Charro Silver tequila, Ancho Reyes Licor (a fine layer of underlying heat) and Triple Sec. And a choice selection of on-tap beers and a 20 for $20 wine list is impressive for the value of the beverages.

Judith Salkin knows a few things about food since she's covered food, restaurants, and chefs in the Coachella Valley for nearly 20 years. Share your favorite valley restaurant with her at xooters@gmail.com.