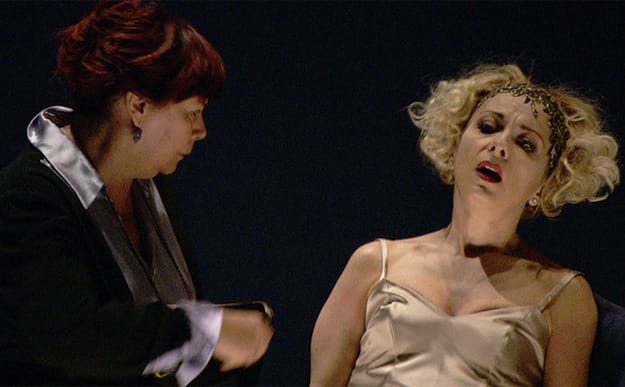 Opera has long been loved for its sense of occasion and pageantry. Its fans are often swept up in the throes of romance, revenge, and melodrama — thanks to tales like Carmen or The Marriage of Figaro.

But what if a director attempted to approach the material in a modern, stripped-down way, free of the usual trappings?

That’s the premise of Becoming Traviata.

This French documentary by director Phillippe Beziat has been described as a “post-punk” and “hipster” approach to a cherished art form. I can’t say that I agree with that assessment. After all, the American Shakespeare Center –with its hip, young, cast — focuses on a post-punk rendering of the Bard’s plays; Il Divo and The Ten Tenors are hipster friendly versions of opera’s traditions.

In Becoming Traviata, Natalie Dessay and theatrical director Jean-François Sivadier collaborate in, what appears to be, a whirlwind production, replete with eye-rolls, exasperated sighs, and insistence on precision. The production of opera La Traviata is brought to life by a cast of actors who show their joys and frustrations from the rehearsal process to the stage.

Becoming Traviata is engaging in the way that most Lars Von Trier films are engaging: It lacks the type of substantive character arc that propels a narrative work – particularly in the “production within a film” genre. However, it’s the voyeuristic nature of the material, as well as the haunting music it showcases that keeps the viewers’ eyes glued to the screen.

With a nearly two-hour run time, it’s an easy-going, yet surprisingly enjoyable picture to get through – even if you were expecting something a bit more “punk rock.”