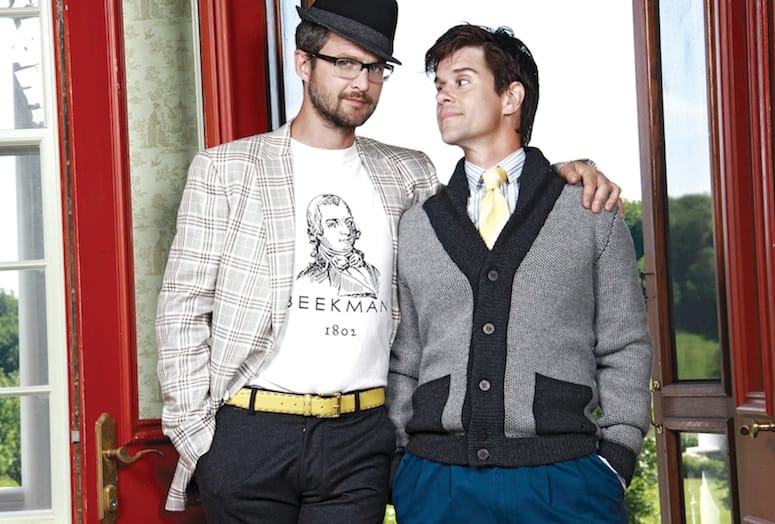 Their Palm Desert Food & Wine appearance is not the Beekman Boys’ first trip to the desert. Josh Kilmer-Purcell and Brent Ridge schedule regular Palm Springs getaways throughout the winter.
PHOTO BY SAILEY WILLIAMS

Beekman 1802 is the little brand that could.

When founders Josh Kilmer-Purcell and Brent Ridge — who only a few years before had ditched
Manhattan to run a goat farm in a tiny town in upstate New York — rang the NASDAQ opening bell for the launch of The Beekman 1802 Heirloom Cookbook, the NASDAQ president called Beekman 1802 “one of the fastest growing lifestyle brands in the country.”

That was 2011. Kilmer-Purcell and Ridge have since released two more cookbooks (with a fourth scheduled for release later this year). In 2012, the couple took a three-week break from the farm to travel 25,000 miles around the world as contestants on The Amazing Race — and won.

Upon their return, Kilmer-Purcell and Ridge broadened their soap and skin care lines and landed their products in retail outlets as diverse as Target, Williams-Sonoma, and Bloomingdale’s.

Kilmer-Purcell and Ridge have managed to do it all with the good humor, authenticity, and “Welcome, neighbor!” spirit that are hallmarks of their brand.

“We say that Beekman 1802 is a ‘living brand,’ ” Ridge wrote in an email while traveling by train between the farm in Sharon Springs and New York City. “We are living every single second of it. We think of ourselves as constant learners and invite everyone to learn along with us.”

Another facet of Beekman 1802 is a reverence for the people who populate the land and the plants that took root over time. Local heirloom vegetables and recipes passed down through generations create the framework for many of their products, such as the Beekman 1802 “Mortgage Lifter” tomato sauce.

“We originally started making a tomato sauce using an heirloom variety of tomato called ‘mortgage lifter,’ ” Ridge says. “The tomato was originally grown by a farmer in West Virginia in 1929, and he sold so many of them that he paid off the mortgage. After we won The Amazing Race and paid off the mortgage on our own farm, we decided to continue making the sauce and to donate 25 percent of the profits to help other small farms across America.”

This attention to detail and commitment to craftspeople are some of the keys to their success.
“As any entrepreneur will tell you, there are at least two losses for every win,” Ridge says. “You can’t take those things personally. You have to learn from each and every one of them.”

On the near horizon is something entirely different. Kilmer-Purcell and Ridge have found a way to combine their love of food, travel, and history: Beekman Trips of a Lifetime. They have visited Cuba and will be touring India just before arriving in the valley for Palm Desert Food & Wine.

Their Palm Desert Food & Wine appearance is not the Beekman Boys’ first trip to the desert. Kilmer-Purcell and Ridge schedule regular Palm Springs getaways throughout the winter.

“It’s always nice to leave the snow on the farm behind for a few days,” Ridge says.