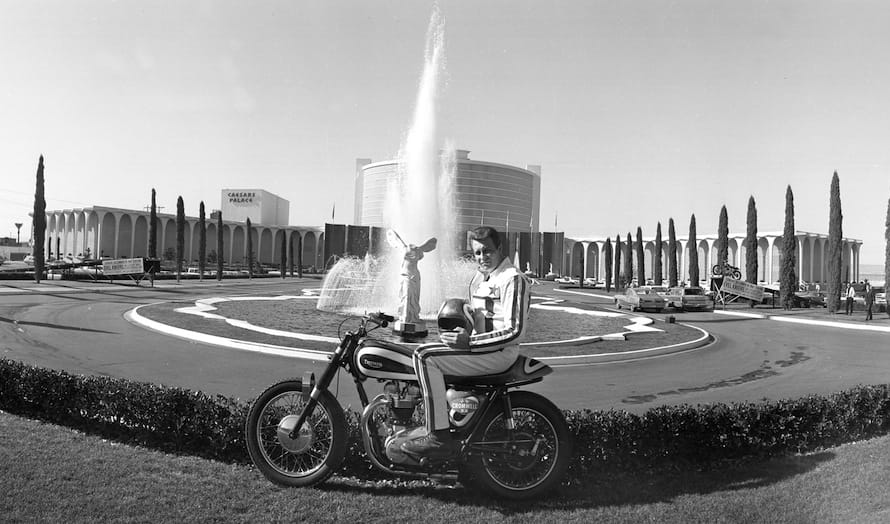 Were Evel Knievel still alive, a recently released documentary on his motorcycle daredevil life, Being Evel, might not be screening.

“I don't think this film would have been possible had he been living,” says director Daniel Junge, who teamed with Johnny Knoxville (co-creator of Jackass) and Mat Hoffman (BMX legend) on the film, which shows Aug. 21 at Cinemas Palms d’Or in Palm Desert.

“I don’t think with the kind of honesty we wanted to tell, he was pretty controlling of his image, which is part of the film,” Junge adds. “Being Evel and this image that he concocted of himself. I think that his death in some ways enabled us to be more honest.” The nearly two-hour film is both a portrait of an American hero and his tragic fall from grace. You might expect the film to end when Knievel fails in his 1974 attempt to rocket himself across the Snake River Canyon outside Twin Falls, Idaho, but then returns to make a pair of successful motorcycle jumps before announcing his retirement.

However, the film goes further to reveal what the later years of his life were like and how he became recognized by a new generation of daredevils.

“I think that Knievel suffered from some of the tragic flaws that we've know of since the Greeks,” Junge says. “I wanted to show that, but I also needed to show the effect that he's had on our culture. To stick with it long enough to say, OK, you went through a personal downfall but that he still means so much to our culture.” Director Daniel Junge: 60 interviews were done so every historical feed about Evel Knievel was covered by somebody who was there.

Palm Springs Life.com asked Junge to comment on other behind-the-scene aspects of making the film.

On what surprised him in making the film.

“The biggest surprise for me is that the people who had the most right to condemn Knievel, who probably should be the most spiteful toward him were, in some ways, the most forgiving and the gracious in the film. The people who loved him the most were the most brutally honest about him, like his wife, Linda. In the first category, someone like Shelly Saltman, who was hit by Knievel with a baseball bat and yet, Shelly, was very generous in the film toward Knievel. I think that speaks to the character of these people but also the character of Evel somehow.” On how important part-time Palm Desert resident Shelly Saltman was to the film.

“Shelly was the first person that I reached out to make the film. We are indebted to Shelly. He's never shared his story before. I don't think the film would be what it was and maybe would not have been made were it not for Shelly's participation. Shelly is just a gentleman and doesn't want to speak ill of the dead. Of course, Knievel went to his grave with an $11 million settlement from Shelly in a civil suit that Shelly never saw a dime from it. Shelly has more than enough reason to loathe the man. The fact that he was so generous, I think, speaks to Shelly's character.”

On making the film with Knoxville and Hoffman.

“History Films said that they had been pitched a similar project by Johnny Knoxville, and would I be interested in teaming with him. We think you guys would make an interesting team. I had a moment's hesitation because I didn't necessarily think Knoxville was the most serious guy I wanted to make a serious film with. Turns out, he is a very serious guy, very serious filmmaker, and he has been a great partner (Hoffman). He must have reviewed at least 20 cuts of the film and gave notes to the frame. He is very serious about this film. He brought Mat on board because Mat is so close to the Knievel's and really has so much credibility in that world that it seemed imperative to bring him on, too.”

On his next project.

“I have a film that was just released in theaters last week. It is a Lego documentary called A Lego Brickumentary.