Bentley’s third-generation 2019 Continental GT coupe has the personalized, hand-built feel that drivers expect but in a lighter structure to enhance aerodynamics and make its 626-horsepower, 12-cylinder engine go even faster.
PHOTOGRAPHS COURTESY BENTLYMEDIA.COM

“We’ve been doing this for quite a while,” Cath says as she glances over her glasses with a wry grin. The affable British seamstress’ eyes return to the partially wrapped rim of a Bentley steering wheel. She and two other seamstresses sit in a workspace pulling thick black thread through piercings on leather strips, crossing back and forth between the tightly spaced holes a time or two before cinching everything together on the inside of their respective rims — then, they repeat. Each labors over a fraction of an inch at a time to inspect the leather for flaws and ensure consistency of grain. “Put any of us in any Bentley made in the last 30 years, and we can tell you which one of us sewed its wheel.”

That’s what institutional knowledge looks like at one of the world’s most storied car companies, and it is exactly what makes hand-built automobiles so special. The vehicles do not derive their indelible singularity from sheer robotic perfection but rather from the subtle, virtually invisible variations that even the steadiest human hand leaves in its wake (or the carpenter’s angling of the wood grain that will look best on a door panel veneer or the leather-worker’s correction of the slight scar of an insect bite on a tanned hide).

My encounter with the seamstress occurred years ago while touring the Crewe, England, factory where Bentleys have been assembled since 1946. That was before Bentley added hundreds of craftspeople to build its Bentayga SUV, to say nothing of the technological developments that enable its driving-assistance and convenience features. So the question on my mind as I gripped the hand-stitched wheel of Bentley’s third-generation 2019 Continental GT coupe was, Can that personalized, hand-built feel remain intact with the influx of new blood, new ideas, and new technology?

The 2019 Continental GT takes Bentley’s stitchery, woodwork, and metalwork to another level in a truly modern design with details that pay homage to the brand’s luxury traditions. 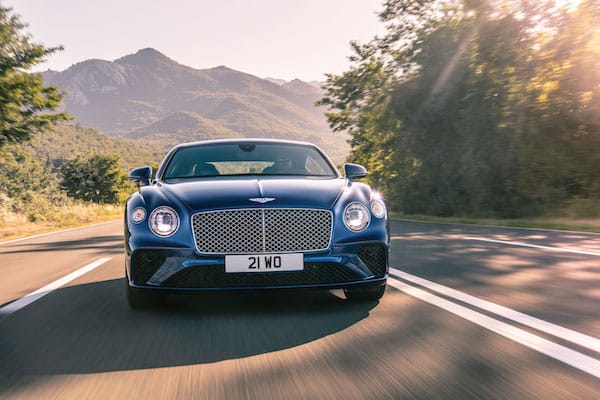 At first blush, the Continental’s styling appears little changed: Its fastback roofline, sweeping fenders, ovoid lamps, and wide chrome grill have been elevated in a thoughtful fashion. The new model appears slinkier and more firmly planted on its wheels. That’s because the front wheels were moved forward by almost half a foot, allowing the engine to tuck lower and rearward, thus elongating the nose and lowering the hood. It retains its pillarless side-window treatment without adding weight to the car’s lighter structure — this enhances aerodynamics and adds pizzazz to the details.

The front fenders (“wings,” in Bentley speak) exemplify the car’s next-level elegance. The aluminum completely envelops the front corners of the car from door to grill. They serve their protective purpose but also provide cover for the frontmost corners of the engine bay. The panel drops down in front to provide seamless flush mounts for the headlamps. Further complexity springs from ornamental creases that trace the fender and help define the shoulder, while the slight depression just inboard from there pays homage to the Bentleys of yore.

Will all of that engineering, bending, and cutting work done solely to eliminate a couple of body seams seduce customers into writing a $220,000 check to Bentley on the spot? Probably not. But with this attention to detail — including the huge wheels, gleaming metal grill insert, and (my favorite) “whiskey glass” headlamps intended to evoke fine crystal glassware — the GT’s visual impact makes $220,000 seem like a bargain.

Anyone lucky enough to sit inside the new Continental GT shall be treated to possibly the most exquisite interior that Bentley has ever offered. Especially if you’re in the roomy front seats. (The sculpted rears are considerably tighter, though adults up to about 5 feet, 10 inches tall should be comfortable back there.) As one would expect, all manner of sybaritic delights are either standard or available, from deliciously soft and fragrant leather to ventilated seats with multiple massage settings and zillion-watt sound systems.

Frankly, if all you’re after is luxury stuffs galore, any number of German carmakers offers as much for half the cost. But none match the Continental GT’s sheer sense of occasion. The 2019 model’s cabin is Bentley’s first truly modern interior: an open and airy space made possible by a sleek, flat, sloping dashboard with a horizontal thrust that continues into the doors. Another first for Bentley is a state-of-the-art touch-screen infotainment system. Traditionalists might delight in its ability to flip back into the dashboard at the touch of a button, a move that reveals a panel containing an analog chronograph, compass, and exterior temperature gauge (only one of a slew of upgrades included in the 2019 Continental GT’s $46,300 “1st Edition” package).

Stitchery, woodwork, and metalwork have been taken to another level. My tester featured gorgeous “diamond-in-diamond” quilting in its two-tone leather, which must have required a small army to cut and sew. The leather and carpeting come in 15 standard hues, and for a fee they’ll match any color you desire. You can also choose from eight wood species in a variety of finishes for veneers, either on their own or in combination with piano black or even a second wood. With the $1,960 Diamond Knurling option, the metal pulls, dials, and thumbwheels brandishing Bentley’s signature, microfaceted knurling number no less than 20. That’s a lot of dazzle for a small space, but there’s nothing gauche about any of it.

Despite these modern enhancements, one Bentley tradition carries on inside the GT — the beloved organ-stop-style air-vent shutters.

One thing the Continental GT has accomplished since the model’s 2003 launch is the reinvigoration of Bentley’s sporting proclivities, which generally had been suppressed for the 70 years it spent playing second-fiddle to Rolls-Royce. Drive a block in a 2019 GT with its new, 626-horsepower 12-cylinder engine, and you’ll never need to be reminded again.

While not the most sonorous engine — I’d wait for the upcoming turbocharged V-8 model if throaty sounds (and a lower price) get you going — the 12-cylinder’s effortless and extraordinary acceleration will nonetheless take your breath away. From a standstill, highway speeds are only three-and-a-half seconds away, and given enough flat road, Bentley says it can reach an eye-watering 207 mph. Seldom, if ever, are such feats called for in everyday driving, but it’s nice to know what’s possible when summoning some portion of that big motor’s considerable power. A word of caution: Speeds can creep high before the driver even notices. Many a time on the freeway, I looked down only to see the needle passing 100 mph when I scarcely felt I had approached 80. Fortunately, the car offers a programmable speed-warning chime.

Recent Bentleys have always been satisfying, high-speed interstate sleds, but this is the first one that had me dreaming about bombing up and down Highway 74. It has lost about 200 pounds, and the outstretched front wheels help balance the Continental GT’s remaining mass. Combined with its all-wheel drive system that operates in rear-wheel-drive mode until slippage occurs, it demonstrates an eagerness to tackle turns. And when it does, virtually no body roll follows — only grip, and tons of it.

The Continental GT is not only good in and of itself, it portends more good things to come. A convertible model should roll out of the factory by the end of this year; around that time, we’ll also see the next-generation Flying Spur sedan, which will arrive in dealerships in early 2020. Will either one also embody that uniquely personal feeling that so characterizes the coupe? We shall see. I imagine that once I can get one of their stitched leather steering wheels into my hands, I’ll know. 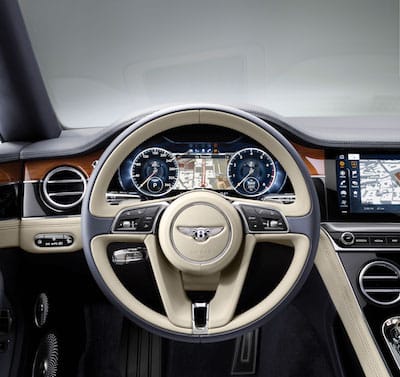 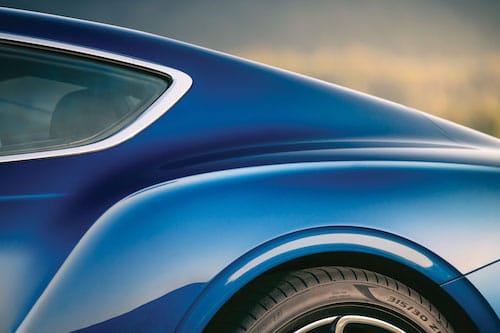 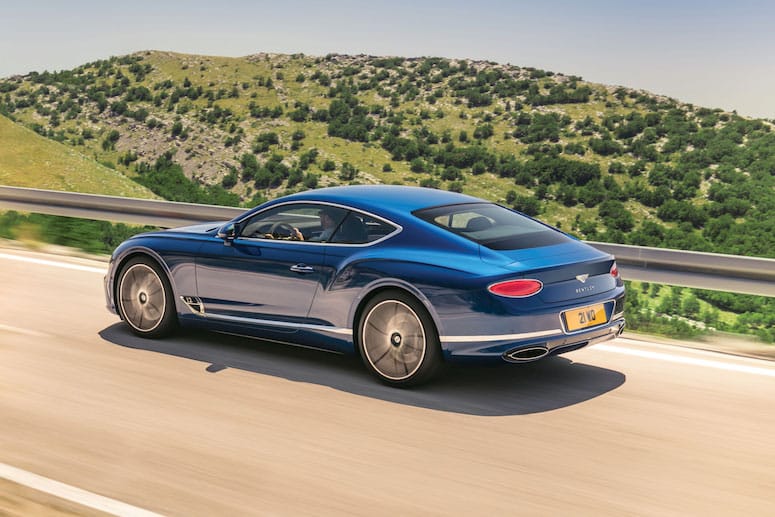