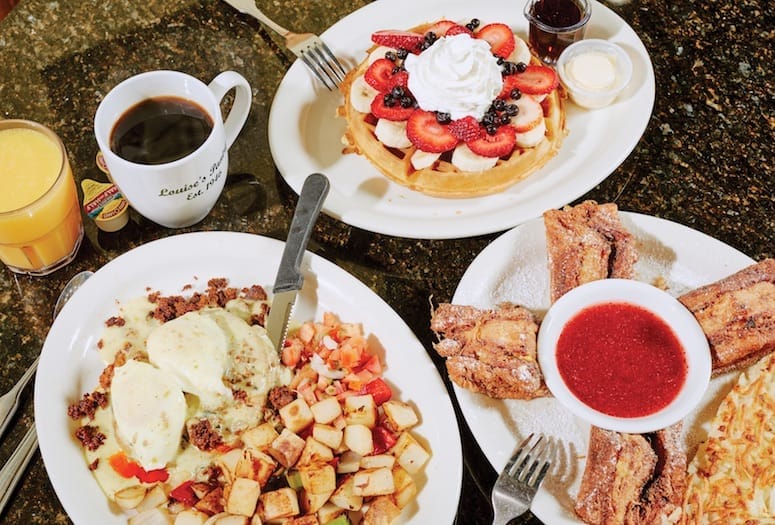 While times and trends change, Coachella Valley residents and visitors can always count on riding the Palm Springs Aerial Tramway up to Mount San Jacinto State Park, strolling the gardens at Sunnylands Center & Gardens, and stopping for breakfast at Louise’s Pantry.

The home-style eatery’s original owner and namesake opened Louise’s Pantry as a lunch counter on Palm Canyon Drive in 1946. The restaurant changed hands and locations a few times before arriving at its current spot in La Quinta in 2005.

Louise’s has spent many years earning local devotees. “We have a lot of regular customers who are known by name when they come in,” says restaurant manager Jared Perry. “It’s like an extended family to me because I see these people every day, every other day.”

The environment has made loyalists not just of customers, but staff, too. “I’ve worked here since ’05,” Perry recalls. “I started as a bus boy on weekends in high school. I went through college and still worked here.” After college, Perry went full time and made his way to a managerial position. Now, he’s in the process of becoming a part owner.

The restaurant customizes its service whenever possible to ensure that all customers leave with a smile. Some of that flexibility is built into the menu, as with the create-your-own omelet. Louise’s cooks pair four fluffy eggs with five toppings of your choice ranging from classic (ham, spinach, and Swiss) to adventurous (bay shrimp, barbacoa, and serrano peppers).

Sweet tooth? Go for the French toast. The egg batter gets a boost from cream, cinnamon, and vanilla. Optional toppers include mixed berries and banana or a decadent serving of German apples and caramel sauce.

Perry recommends the chicken fried steak and egg drenched in gravy. He also favors the eggs benedict. Both dishes stand out thanks to their rich, housemade sauces.

As much as he loves digging into the eatery’s food, Perry says the real highlight of his job is interacting with guests — plus one notable bonus. “I love the people that come in here,” he affirms. “And we have really good coffee.” louisespantry.com

The massive menu ensures a crowd-pleasing brunch, and the patio along Palm Canyon Drive provides ideal people-watching in the heart of town. lulupalmsprings.com

Enjoy a short stack or chili omelet while staring at the walls, which display historic black-and-white photographs and vinyl records. thecottagetoo.com

The omelets, pancakes, and chicken-fried steak are great, and so are the bennies, from the Canadian bacon classic to a Reuben variety topped with corned beef and sauerkraut. sunshinecafe.com

The Palms serves soft and sweet buttermilk pancakes with crispy edges that are as close as it gets to perfection. thepalmscafeinc.com

The range of scrambles includes a Greek-inspired option with spinach, tomato, and feta and a protein-packed meat lover’s option. jcsonelpaseo.com

Take in the view of the Indian Wells Golf Resort while enjoying a fried egg sandwich (hello, candied bacon) or the banana nut French toast. indianwellsgolfresort.com

Order the chilaquiles with carne asada or the scrambled eggs and nopales (sauteed cactus). elmexicalicafe.com

We like the chorizo and menudo as well as the sweet Augustine stack: a buttermilk pancake, Belgian waffle, French toast, and a cinnamon roll with brown sugar-rum butter sauce. augustinecasino.com