Boomerang for Modern is Your Palm Springs Modernist Headquarters 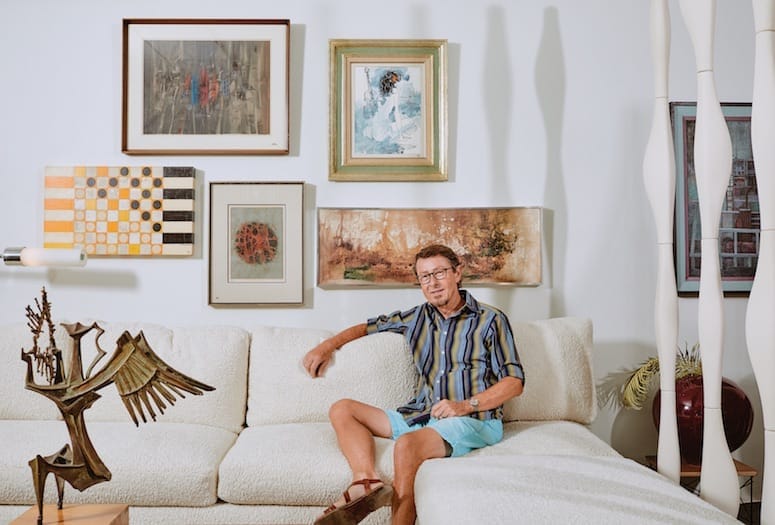 The philosophy behind Boomerang for Modern is simple: If it’s not something the vintage store’s owner, David Skelley, would put in his own 1957 home, he will not sell it in his shop. He has maintained this viewpoint for more than three decades.

While working as a waiter at a San Diego restaurant in the 1980s, Skelley contemplated opening his own store to showcase his growing collection of kitschy post-war blenders, toasters, and similar objects. As fate would have it, a new owner at the restaurant fired the entire wait staff — a decision that Skelley figured was the universe nudging him to follow his passion.

First, he needed a catchy moniker for the shop that would convey his aesthetic. “I wrote down a bunch of names that I thought had a midcentury sound to them,” Skelley recalls. “There were words like ‘galaxy’ and ‘atomic’ and ‘amoeba.’ I decided on ‘boomerang’ because of the significance of the recycling and returning of pieces. I thought it was memorable, and it comes up early on alphabetical lists. It’s also one of the classic shapes of the 1950s, with the famous boomerang-shaped coffee tables and pools.”

As time went on, Skelley, who has a significant background in fine arts, sought to become more familiar with the historical significance of the notable post-war designers he admired. “As I learned more,” he says, “the store got better merchandise and I moved to a bigger space and eventually leapfrogged to where we are now.” His store in San Diego’s design district became a destination for  collectors and interior designers, and drew personalities such as Courteney Cox, Rue McClanahan, and Lily Tomlin. 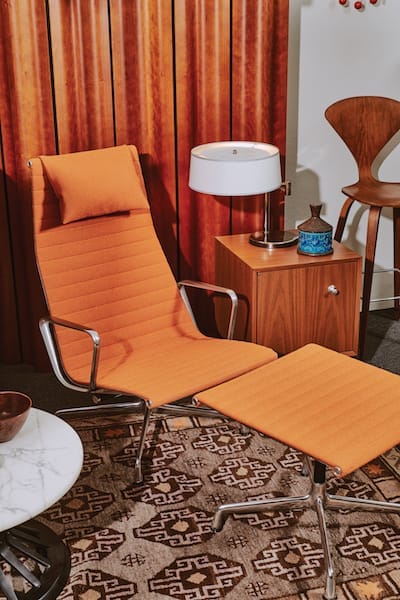 Boomerang is the place for modernist design. 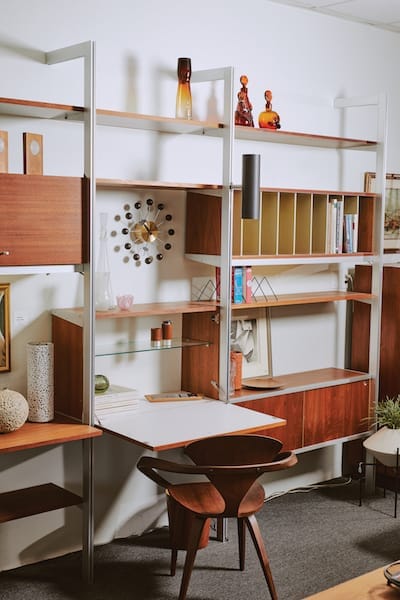 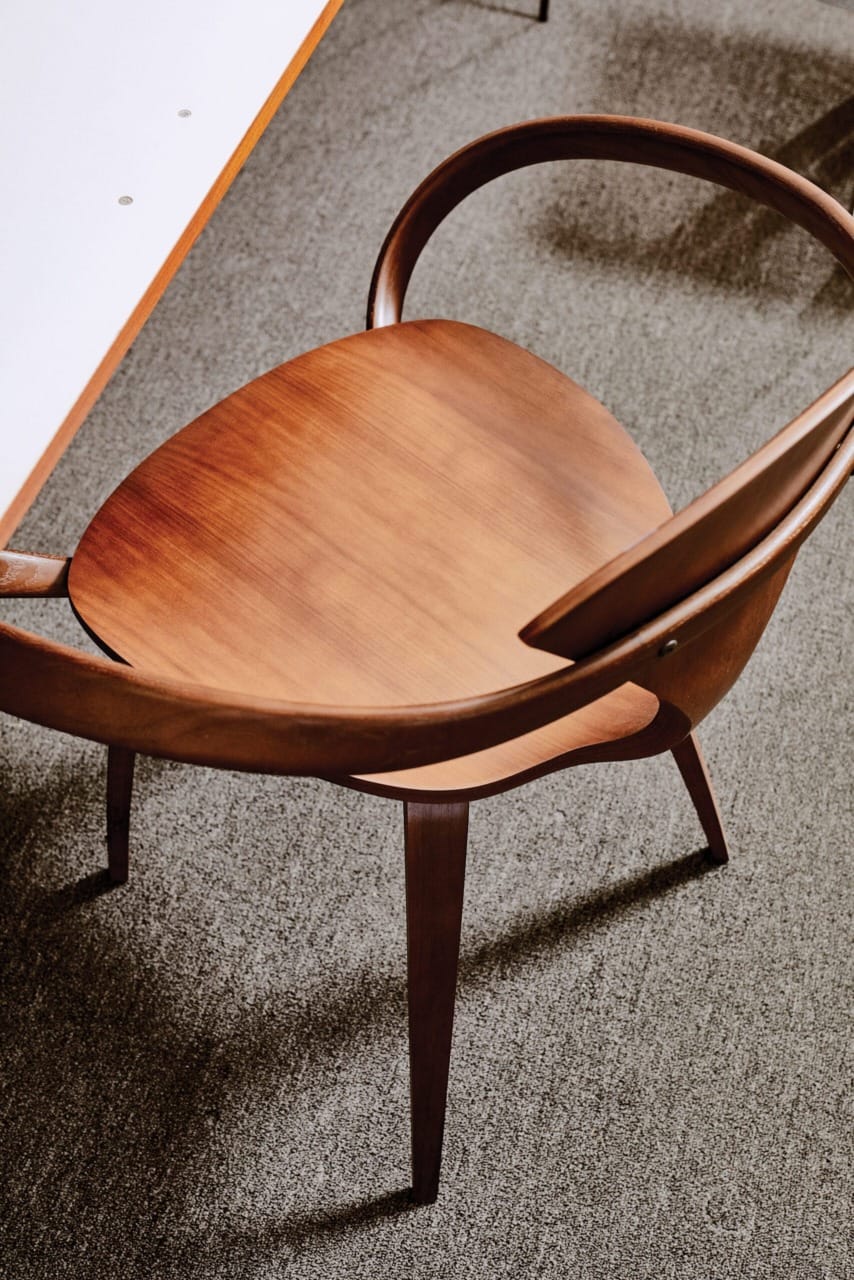 Now firmly entrenched on North Palm Canyon Drive, Boomerang for Modern has emerged as one of the desert’s most dynamic additions to its array of midcentury furnishing shops. Skelley and his partner, a retired graphic artist, migrated to Palm Springs in 2019 and haven’t looked back, except to study their constant influx of new inventory.

“I try to stick with items from about 1946 to 1975,” he says. “I’ll fudge outside those lines if the piece is beautiful and aesthetically fits, but I don’t really handle retro pieces or ‘in the style of’ pieces.” He insists on authenticity. “When people come in, they don’t have to ask if it’s the real deal. They know they’re not looking at a copy.”

The shop’s selection comes from around the country. Skelley explains that people call him when they want to downsize or when their parents die and want their items to go to folks who will appreciate them. “That gives me the opportunity to talk to the people one on one,” he says. “I get the backstories on the pieces and sometimes I get really interesting history on how this piece came into the person’s life and if it’s traveled from Finland to New York to Palm Springs. I think it helps sell an item if people know a little about the history of it.” 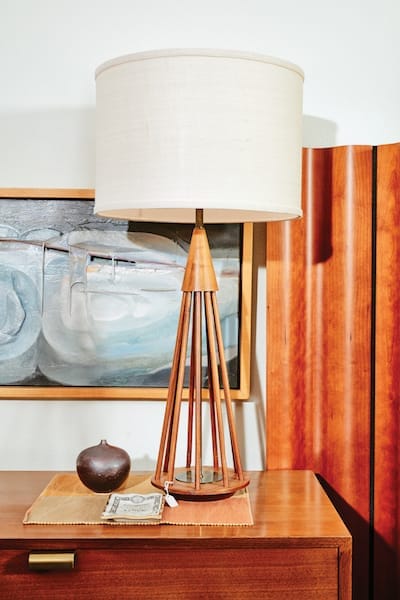 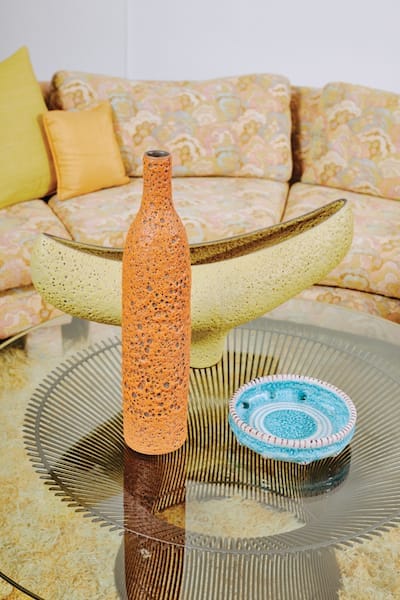 While shoppers can often find whatever they’re looking for at Boomerang when it comes to vintage furniture, lighting, and objects, Skelley also makes it a point to only sell original artwork. “I don’t sell any prints or multiples,” he insists. “It’s all art that’s touched by the human hand.”

Yet, some items in the shop might best be described as midcentury inspired. A few years ago, Skelley became a retailer for Herman Miller, selling new items from the renowned furniture maker. He sees this as a supplement. “If someone comes in for a set of dining chairs,” he says, “they’ll all match because they’re from the original manufacturer.”

His clientele hasn’t changed much since his transition to Palm Springs. “I have customers in Japan that I’ve been selling to since the ‘80s,” he says. “I also send items to Europe, but most of my clients are in Southern California. That’s the aesthetic to the shop, anyway.”

Although there’s been an increase in designers shopping at Boomerang for Modern, Skelley’s clientele is mostly individuals furnishing their own homes. “I’m getting more and more young people,” he says. “The things I sell aren’t beginner-priced, but some young people are doing really well and want to furnish their homes nicely. They’re very fun, sometimes quirky, and highly educated. It’s a joy for me to talk to people about something I’m so passionate about.”

While he describes his style as understated, Skelley receives praise for his expertise and the way he arranges the inventory. “Arrangements, the relationship of one item to another, are very important to me,” he says. “People say they love how the space is curated and how the items relate to each other, even though they were found randomly.” He attributes this skill to another classic style maker, the late artist and designer Ray Eames. “I studied her style and learned she really had an eye for arrangements,” he says. “Whether it’s on a tabletop or in a room, whenever I put something together, I think ‘What would Ray Eames do?’”

Skelley, it appears, is doing fine on his own. boomerangformodern.com 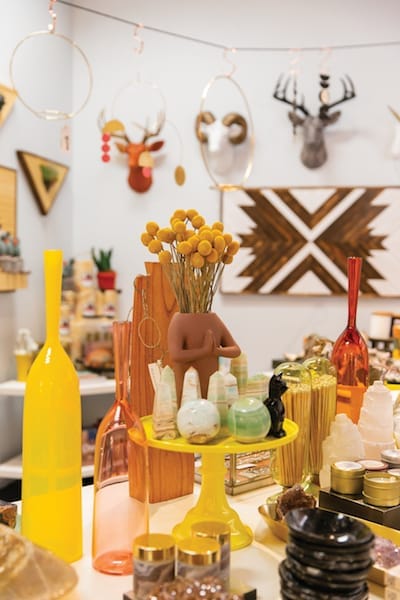 It’s easy to see why this “artisan-forward” store has become one of Rancho Mirage’s most popular destinations. This is where to visit when you need to feel a little extra. Here, you’ll find a coterie of esoteric items, such as a provocative terracotta planter from The Archer and the Ram, eco-friendly flatware from Designworks, and even pom-pom wall hangings by Palm Springs Life art director Anna Kula. ranchorelaxoca.com

There’s more on display here than last season’s colorful Trina Turk caftan. Pick up a stylish cement accent table for the den, a set of vintage champagne flutes for your next celebration, and a pair of throw pillows newly upholstered in a bold, outdoor-friendly fabrics. Besides the mind-blowing inventory, Coachella Valley’s best-known thrift store offers guilt-free shopping because 100 percent of its profits benefits DAP Health. revivalsstores.com

You know what your home is missing? A pair of Frank Gehry Bentwood Maple Cross Check Armchairs designed for Knoll. Or how about a life-sized boxer pup sculpture created entirely of reclaimed materials by artist Leo Sewell. They’re here. And if you plan to sell your own like-new furniture, make this your first stop. Be advised, there are new arrivals every day. encorelq.com