La Quinta Resort & Spa Has Long Been a Desert Favorite 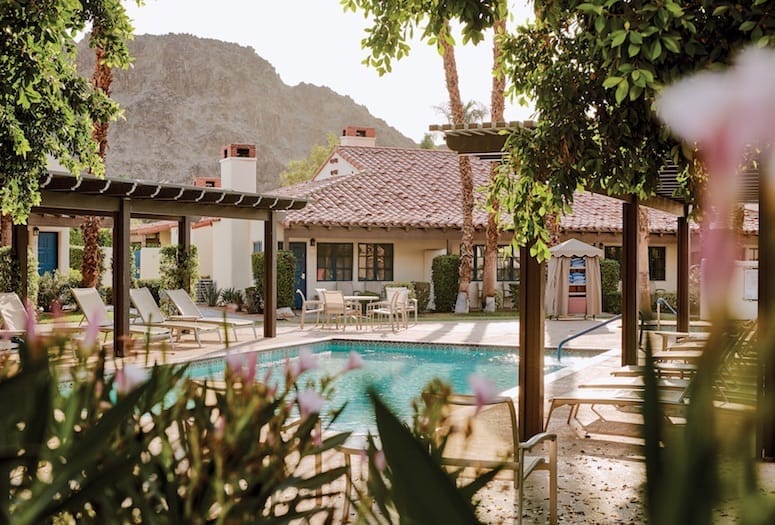 Over the past year, everyone was pivoting, especially the La Quinta Resort & Club, the iconic property originally opened in 1926 by San Francisco oyster company heir Walter H. Morgan as a desert hideaway for such Hollywood luminaries as actress Greta Garbo and filmmaker Frank Capra, who reportedly wrote parts of It’s a Wonderful Life there. When the COVID-19 pandemic forced the Spanish-style resort to shutdown, La Quinta once again found an ally in Tinseltown.

The ever-popular ABC reality series The Bachelorette opted to film its entire 16th season on the property last summer, transforming La Quinta’s ballrooms into sets, accommodations into housing for the cast and crew, and hot tubs and other nooks into places to plant smooches. The resort’s staff helped to create a self-contained COVID-19 bubble, allowing for the show to go on despite the global pandemic.

“The good thing about that is it meant that we were able to bring back staff,” says general manager Dermot Connolly, who’s overseen operations of the 45-acre resort for the past three years. “We brought all these people into a complete quarantine situation. We had doctors and nurses here at the property administering tests and making sure everybody was negative. We adapted all our food and beverage operations to be able to supply everything these groups needed for 70 days.” 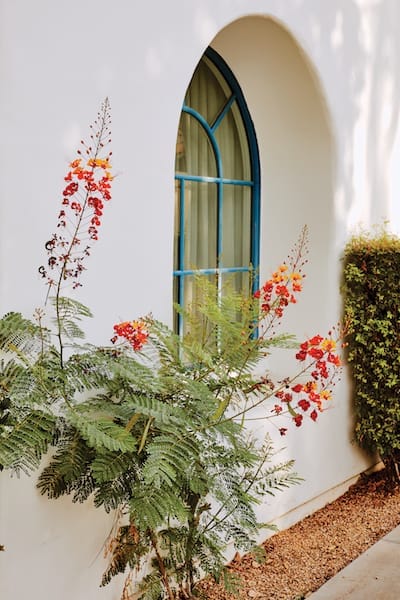 La Quinta Resort & Club is a desert classic and favorite of Hollywood. 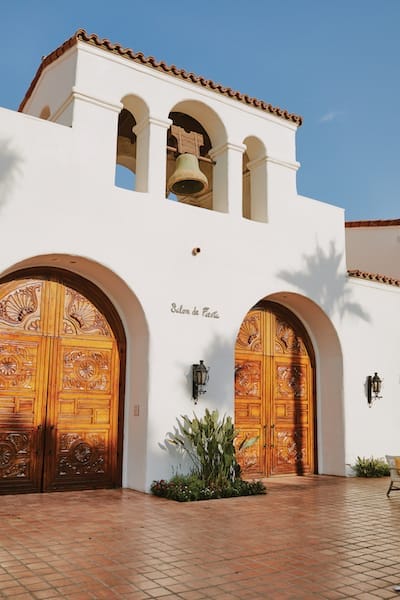 The spa and salon offer the full range of services.

The Irish-born Connolly was surprisingly equipped to handle many of the problems that came with operating a hotel during a pandemic. Before joining La Quinta, he served as the managing director at Puerto Rico’s famed El Conquistador resort when Hurricane Maria devastated the island in 2017. “I had kind of already gone through a prior crisis in Puerto Rico,” he says. “That's a completely different scenario, but I knew how to operate with Zoom, keep the team motivated, and things like that.”

Without the conferences, weddings, and other large gatherings that La Quinta typically hosts throughout the year, the revenue generated from TV and film production helped keep the property afloat during one of the most challenging times in its 95-year-long history. Connolly notes that, in a way, the overly spacious La Quinta was always prepared for COVID-19 because the property, part of a 1,400-acre parcel purchased by Morgan, was originally constructed after the Spanish flu pandemic.

“We've been social distancing here at the La Quinta Resort since 1926, the year the resort originally opened,” Connolly notes. “It was designed in the early '20s following the prior pandemic, so in the way it was laid out, [the Spanish flu] was still in the back of people's minds, even though they were past that and into the roaring '20s.”

The dreamy La Quinta, which is part of Hilton’s top-tier Waldorf Astoria collection, has long been lauded for its ethereal atmosphere in the foothills of the Santa Rosa Mountains and abundance of high-end activities and amenities, including tennis and pickleball courts, a world-class spa, beloved restaurants, and golf courses — both at the resort and at sister property PGA West.

When the resort eventually opened to guests last fall, Connolly and his team rejiggered many offerings with safety in mind. The boutiques, for example, were limited to one party at a time inside, creating sophisticated private shopping experiences, and the restaurants were moved almost entirely outdoors. While the resort is in the process of reverting many pandemic-influenced changes, others will remain in place now that restrictions have been lifted, such as guests having the ability to order room service from their smartphones. 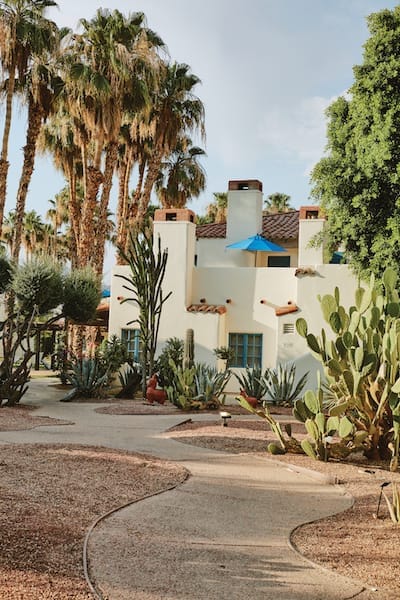 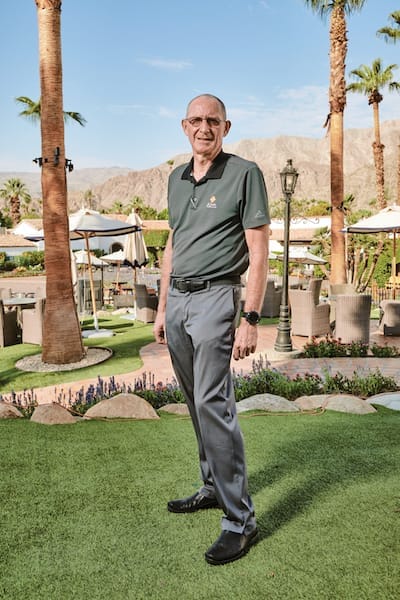 “As we look forward to the world becoming a safer place, I’m hopeful we’ll bring back the magic of the holidays to La Quinta again,” says La Quinta’s director of marketing Chris George. “Coming to the lighting of our tree is a tradition that many guests have established in their own personal lives. It was unfortunate we had to postpone it last year. Mostly, I’m looking forward to the hotel being full of guests and team members again.”

In the meantime, Connolly continues to hop on his cruiser bike each day to ensure that the 41 climate-controlled pools, 53 hot tubs, and 800 casitas, villas, and suites are in tip-top condition for visitors. It’s his favorite part of the day.

“Usually, it's about a three-to-four mile trip, depending on which way I go,” he says. “I get to all the pools, which is not an easy thing to do because we have 41 one of them, to make sure that everything is in order. I look out for room service trays, make sure we have towels at every pool, and help guests along the way. You can imagine the attention to detail that requires.” laquintaresort.com

It’s not just the plethora of pools, restaurants, and bars that keep guests coming back to the Parker. It’s a well-curated vibe. With fun touches like an English-style croquette lawn and a wine bar that’s actually a religious experience, the Jonathan Adler-designed resort is a real-world wonderland. parkerpalmsprings.com

Nowadays, there’s so much trendy chatter about self-care and wellness. Those concepts have been part of Two Bunch Palms’ DNA for decades. With scads of mineral-rich waters, the sustainable-but-sleek hideaway is a relaxation haven, and its new Twine venue is a prime place for a glass of fresh juice or organic wine. twobunchpalms.com

Nestled 650 feet above the desert floor in the Santa Rosa Mountains, the Ritz-Carlton offers unparalleled views of the Coachella Valley from spacious rooms and suites as well as extravagant dining venues like The Edge, a steakhouse surrounded by glass walls that features a selection of cuts aged in-house for 21 to 65 days. ritzcarlton.com 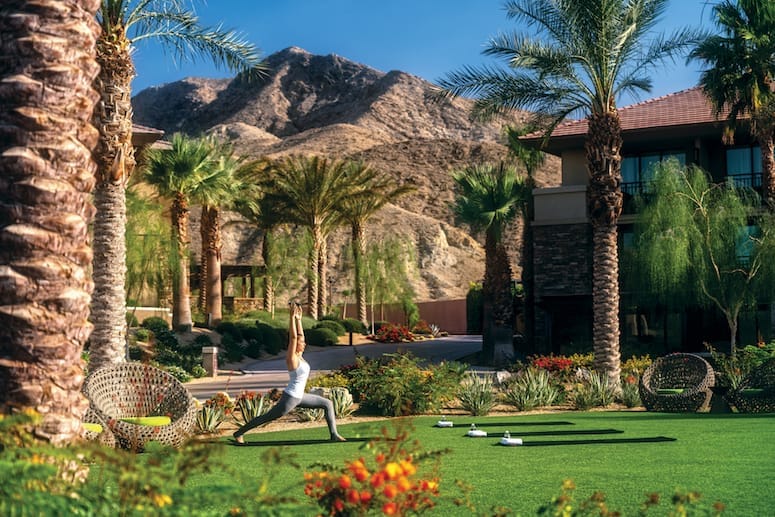 Once home to the iconic tennis tournament now known as the BNP Paribas Open, the Hyatt Regency is a vibrant resort with family-friendly appeal. In the past year, the 45-acre property refreshed the rooms and added a pair of 30-foot-long water slides and 450-foot-long lazy river to its bustling pool complex. indianwells.hyatt.com

If you crave a Vegas moment but don’t want to drive through the Mojave, Fantasy Springs deftly replicates the experience with admirable accommodations, a lively gaming floor, diverse dining establishments, solid pool area, massive arena, and the best bowling alley in the Coachella Valley. fantasyspringsresort.com