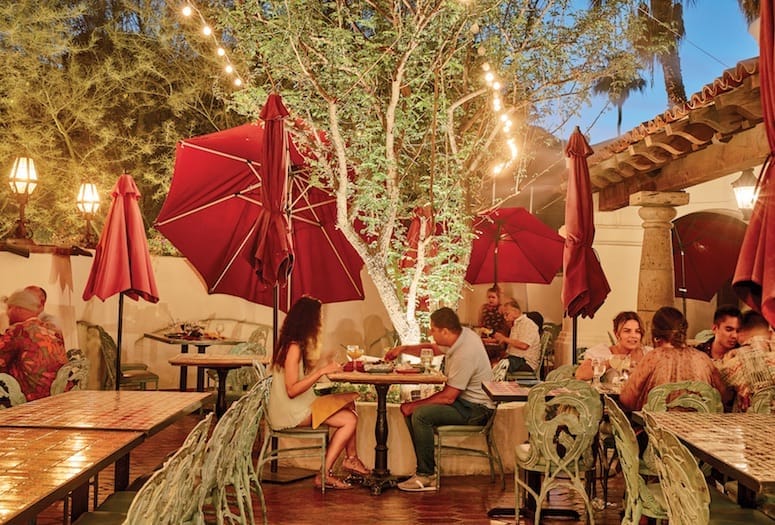 We’re eating more meals outside lately, but open-air dining has always been a staple of Coachella Valley living, with settings ranging from rooftops (Kimpton Rowan) to gardens (Spencer’s Restaurant). We especially love the ambiance of Las Casuelas Nuevas, where the grand hacienda style creates the perfect setting for its Mazatlán-rooted specialties dating back a century to the great-grandmother of restaurant owner Andres  Delgado.

Las Casuelas founders Florencio “Del” and Mary Delgado first decided to serve these dishes in 1958 when they opened the original Las Casuelas, which still operates in Palm Springs, a few blocks north of the popular Las Casuelas Terraza. All of the restaurants are separately owned and operated by Delgado siblings and their spouses

The patio splits into three sections and vibes like a Mexico vacation with strolling mariachis, tall ficus trees providing shade during lunch, and strung lanterns casting a soft light at dinner.

Servers prepare the guacamole tableside and deliver the best fajitas in town, with a choice of chicken, steak, pork, seafood (or a combo), or a vegetarian option with grilled broccoli, carrots, and yellow squash. In addition to the burrito, enchilada, and taco offerings, regular diners recommend combinations such as Las Casuelas Especial, which includes a cheese enchilada, pork tamale, chile relleno, and ground beef taco.

We also appreciate the health-conscious offerings, including the red quinoa and spinach enchiladas topped with cotija.

It wouldn’t be Mexican without a margarita, which you can spice up with fresh jalapeños and a tajin rim. Try the Cadillac with 1800 reserva reposado tequila, agavero, and grand gala; the Mezcaal Skinny; and the Cucumber Jalapeño.

The tranquil environment is perfect for a healthy, farm-to-table, Cal-Mediterranean breakfast, lunch, or dinner. The organic chicken pho and kale salad with salmon are lunchtime faves. If you’re vegetarian or vegan, try the grilled artichoke and the vegan lasagna. twobunchpalms.com

A hidden gem, Delicias offers Mexican specialties all week, as well as pozole and menudo on weekends. haciendamexrestaurant.com/deserthotspringsmexicanfood

The courtyard patio on El Paseo offers a variety of scrambles, entrée salads, sandwiches, and jumbo all-beef hot dogs, as well as a list of tempting desserts. jcsonelpaseo.com

Start with a Vickyrita, made with Don Julio blanco tequila, Cointreau, sweet and sour, a splash of orange juice, and a Grand Marnier float, served on the rocks with a salted rim and then move on to the macadamia-crusted Chilean sea bass or the filet mignon with béarnaise sauce, Gorgonzola butter, or peppercorn sauce — with roasted Brussels sprouts topped with bacon and pine nuts. vickysofsantafe.com

This pizzeria in pedestrian-friendly Old Town has 21 pie offerings (or design your own) and also serves flatbreads, small plates, salads, pastas, and dinner specialties. stuftpizzabarandgrill.com

You can make a meal of the chiles gueritos rellenos de camaron appetizer. We think it’s a fine start to a fiesta at El Mexicali, which introduced outdoor seating during the pandemic. This place is a local treasure. elmexicalicafe.com