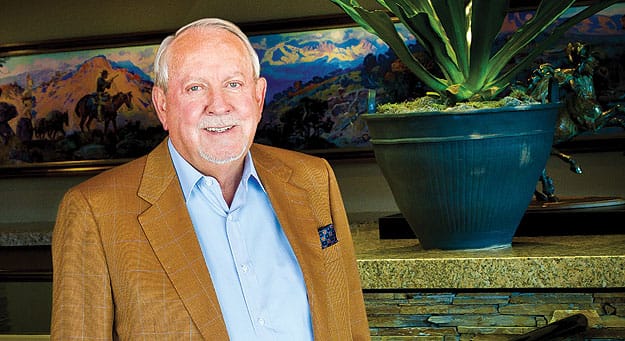 When development investment companies decide to sell an established luxury community, another such conglomerate usually steps in. When WCI Communities Inc. (a division of Westinghouse Electric Corp.) in 1996 put Bighorn Golf Club up for sale, one of its members, R.D. Hubbard, organized a group of 13 of his neighbors to buy the Palm Desert club.

“I wasn’t in the development business,” says Hubbard, who owns Ruidoso Downs Racetrack in New Mexico. “All we ended up doing was what Westinghouse had originally promised to do.”

Top on the list, Hubbard says, were locking the front gate and limiting golf to members. “We never thought of doing anything but getting our investment back,” he says. “But, lo and behold, it turned out to be one of the best investments I ever made.”

In 15 years, Bighorn grew from 50 to 515 members and made many additions (without assessing fees on other residents): a second golf course, The Pour House restaurant, a 13,000-square-foot spa and wellness center, Canyon Steak House, and The Marketplace (which includes a Starbucks). The newest improvements include adding a dog park, a children’s playground, and two lighted bocce ball courts, as well as expanding The Pour House.

Hubbard and his wife of 39 years, Joan Dale, began coming to the desert in the early 1970s and owned a residence in La Quinta when they heard about a new development called Bighorn. Impressed by the sweeping views and the golf course, the couple decided to build a 17,000-square-foot house there in 1992.

Integrating California contemporary design with their love of horses and Western art, the Hubbards installed Veryl Goodnight’s larger-than-life bronze horse statuary in the expansive driveway and two notable paintings by Charles Russell in the foyer: History of the West I and II. “The paintings, commissioned by [oil tycoon Edward] Doheny in 1926 for $30,000, reflect every part of the West except the Indians,” Hubbard says, laughing. “The rattlesnake [wrapped around the oil derrick in the painting] is Doheny.”

A self-admitted risk taker and wizard at turning the impossible into the probable, Depression-raised Hubbard sees much in life as a gamble — but only on his terms, which have proven widely profitable. He began his corporate rise in 1959 as a salesman with a small company, Safelite AutoGlass. Within nine years, he was president of the company, increasing revenues from $7 million to $100 million, making Safelite the nation’s largest auto glass replacement company. Hubbard acquired two other glass companies, transforming the business into AFG Industries, which later sold to a foreign manufacturer.

Passionate for racehorses, Hubbard turned his focus to horse breeding, racetracks, and casinos. “There is no greater thrill than seeing one of your racehorses run and win,” he says. “It is the excitement and thrill of the race. The horses are absolutely beautiful.”

Hubbard, who owns a large breeding farm and has turned out world-champion studs, bought Ruidoso Downs Racetrack in the late 1980s. Later, he and Joan established the Hubbard Museum of the American West in Ruidoso Downs. The museum encompasses a 10,000-piece collection of Western and cowboy artifacts to “honor the sacrifices and adventures of these people’s lives.”

Ruidoso has become the couple’s primary home. Cooler mountain temperatures draw them for the entire summer, coinciding with the busy quarter horse race season that ends on Labor Day with the All American Futurity. Although he has bred many world champions and won significant races, Hubbard’s goal each year is winning the All American. “It is No. 1 on my bucket list,” he says. “To see babies grow up and become champions is very exciting. … The whole business is a gamble. But, if you are successful, the sky’s the limit.”

One of eight children, Hubbard says his family had no money to pay for education. He and Joan are ensuring that families in similar circumstances have learning opportunities. “Helping young people get an education is the most important thing we can do,” says Hubbard, who with his wife established the R.D. and Joan Dale Hubbard Foundation in 1986. “We started with local scholarships in our hometown; and, as we got bigger, we expanded the program to New Mexico and California — places dear to us where we reside.”

The foundation has awarded $30 million in grants and scholarships. “We basically give $1.5 to $2 million a year,” Hubbard says. “We never thought it would be this big.”

“We have an unbelievable membership,” Hubbard says. “Nearly 95 percent are entrepreneurs who started their own companies. When they are asked to contribute to a cause, the response is overwhelming.”

Eisenhower Medical Center has been a major recipient of Bighorn giving. At the beginning of 2004, Eisenhower officials approached Hubbard about helping raise money for their expansion plans. “I told them I thought we could raise $3 million,” he says. “We put a thermometer in the [Bighorn clubhouse] lobby; and, in a few months, we had raised $10 million. The Bighorn community has raised over $26 million in the last five years for Eisenhower.”

When Hurricane Katrina devastated New Orleans, Hubbard sent an e-mail to all members offering to match donations up to $500,000; Bighorn members raised $1.5 million. Recently, Hubbard invited Jack Nicklaus to Bighorn to give a charity clinic for wounded warriors. Again members came through, raising $1.5 million for a veteran’s rehabilitation golf course in Washington.

A six-year cancer survivor and Bighorn resident, Selby Dunham was diagnosed and treated in the valley. She wanted to give back to the community and turned to Hubbard. BAM, standing for Behind a Miracle, was born out of her conversation with Hubbard at The Pour House one day in 2009.

“He is an amazing man, a visionary,” says Dunham, who chairs the event. “He does so much no one even knows about, including [offering] his advice and time.”

Hubbard and pro-golfer Jim Colbert have been friends for 30 years, first meeting when Hubbard brought in golfers for a fundraiser that Colbert was organizing for Kansas University.

”He called me to play at this new course in Bighorn, then to come back again,” Colbert says. “Then he asked me if I wanted to be one of his partners. It has been the best partnership I have ever had. We weren’t expecting to make a bunch of money, but it turned out to be an excellent investment. We have no debt in Bighorn and a nice reserve.”

It became Hubbard’s passion, according to Colbert, who says Hubbard just “wanted to be in the best place in the world” and does “all the right things.”

R.D. and Joan Dale Hubbard are downsizing to a 10,000-square-foot house on one level in Bighorn Golf Club, on target for completion by fall 2012. Perched on a cliff high in the club, the property will include an infinity-edge pool and a great room that will be the “heart of the house and jaw-dropping,” according to its designer, Kristi Hanson.

“The spectacular view is mainly why we decided to build,” Hubbard says of the higher-elevation site. “We are able to look down on the whole valley.

“It is all about timing,” he adds. “Our timing on Bighorn was outstanding with things just turning around; with the glass business, we ended up with a glass shortage when I took over. But you make your own timing too. You hire good people, tie them into the profit, and work as a team. I did not know how to make glass or run a golf club. The right people make it a success.

“My other philosophy is to give back to your community,” Hubbard says. “We’ve been very fortunate. It’s a privilege to offer to help.”