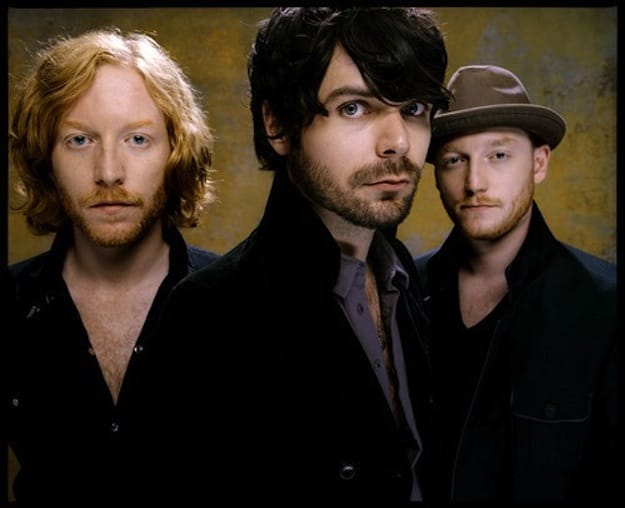 It’s the kind of meteoric rise that most bands can only dream of.

For Biffy Clyro, however, the fairy tale is one well-deserved. The Scottish group, fronted by guitarist Simon Neil (pictured below), has finally achieved success on the top of the British charts –11 years after its debut album — with the release of Opposites.

Now, the trio will court a wider audience stateside with upcoming appearances at Coachella Music and Arts Festival 2013 on April 13 and 20, as well as tour dates at Reading and Leeds festivals in their native United Kingdom.

Opposites is one of those defining moments in music history when a band stands up, drops trou, and shows the world what they’re truly made of.  It’s packed with Neil’s truly spectacular, framed perfectly by James Johnston’s bass playing and backing vocals, as well as Ben Johnston’s masterful drumming.

I caught up with Neil to discuss Biffy Clyro’s hard work, massive tour schedule, and the 22-track disc that’s been causing such a ruckus.

You guys recorded much of Opposites in Santa Monica, Calif. – land of the ex-pats. What is it about that city, in particular, that attracts so many Brits and lent itself to the creative process?
SN: Being a British person, it’s paradise. Being near the beach, California in general is gorgeous. But Santa Monica is such a relaxed way of life. So when it came time to pick where we wanted to make this record, there was really only one place. We did the last album in Hollywood, which was great fun, but it’s kind of a concrete jungle. There’s not a lot of places to go and relax.

You guys are Scottish, but you’ve toured and recorded stateside and all around the world. How do your fans differ everywhere you go?
SN: I think when it comes to shows, people are there for the same reason: to have a good time and to feel part of something. I think that’s the great thing about music. It makes you feel part of a community.

You’ve got such a well-developed style to your playing. Who are some of your guitar heroes?
SN: I guess I see myself as the middle ground between Kurt Cobain and Slash. That’s where I want to be. I don’t know if I’m quite there yet. For me, the biggest influence on my guitar playing is the fact that I played violin first. I played violin for five years before I played the guitar. It kind of taught me a different way to use my fingers with my fretting hand so every chord I play, I always use all four fingers and very rarely am I only playing a basic chord. I’m a huge fan of Omar Rodriguez-Lopez from the Mars Volta and At the Drive-In. I think he’s great. Ian McKaye from Fugazi is an incredible guitarist. I love Slash and Kurt Cobain. I love Stone Gossard, but I definitely think the violin has been more of an influence than one individual player.

I love this record and all the variation on it. Which of the tracks is your favorite to play live?
SN: Well, it kind of changes week to week, but at the moment the song I’m most proud of is called “Spanish radio.” We used a Mexican mariachi band on that [track]. To me, it’s the riskiest song we’ve ever recorded because it could have ended up such a mess. It could’ve been just an abominable experience for the listener and for us. It’s a 5/4 rhythm, which is really unusual — really an awkward rhythm. And to get a mariachi band playing on that when they had never really played anything other than 4/4 was really kind of a challenge. It ended up taking us four hours to record their parts because we had to do it bar by bar. But to hear how it came out – it came out as this sort of space-rock song with a mariachi band aboard a spaceship and I just think it’s a really new sound for us.

Opposites is currently available in stores and on iTunes. For more on Biffy Clyro, visit www.coachella.com