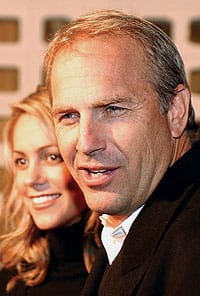 There are a few things you can expect from a 15-year-old: attitude, a propensity to dress in black, and a serious desire to be very, very cool. So it should be no surprise that on the 15th anniversary of the Palm Springs International Film Festival, things are looking decidedly different from years past.

With longtime sponsor Nortel Networks bowing out and new sponsors taking a larger role — most notably Tiffany & Co. and the City of Palm Springs — the festival is no longer simply kid sister to Cannes, Sundance, and Berlin, but the premier pre-Oscar stop for voters of the Best Foreign Language Film Academy Award and a verifiable destination for the glitter set and cinemaphiles alike. All of which means she’s going to have plenty of opportunities to wear that fancy new black outfit several times between Jan. 8, when the festival kicks off, and Jan. 19, when it concludes.

“We’re really taking it up a notch this year,” Executive Director Darryl Macdonald says. Macdonald should know: he worked on the original festival when it was still the brainchild of former Mayor Sonny Bono. Back then, Bono could only envision what the success of the festival would augur for both the city and the entertainment industry, an ideal Macdonald fully embraces. “We’re making a major push in all areas this year and it’s already having a positive and measurable effect.”

Part of that push includes an advanced role for traditional media outlets — a sure sign that Hollywood has embraced the Palm Springs festival — with Entertainment Tonight taking the lead as a major media sponsor. With two dozen planned segments leading up to the event and live remote reports during the nearly two weeks of programming, a schedule that closely mirrors ET’s coverage of Cannes, all the latest news will be beamed directly into homes across the world. And with ET anchor Mary Hart taking over hosting duties of the Awards Gala on Jan. 11, it’s a near certainty that the festival will receive the attention it has long deserved.

“I have watched this festival continue to grow each and every year,” Mary Hart says, “and it is a great honor for me and Entertainment Tonight to be part of such a significant celebration of world cinema.”

“She’s the personification of what a host should be,” Macdonald says of Hart. “As one of the most prominent faces in entertainment, she was a natural to take center stage.”

Zanuck will be honored with the Lifetime Achievement Award for Producing, a benchmark recognition that reflects his rich legacy and continuing presence in the industry — from his 1973 Academy Award for The Sting to this winter’s eagerly awaited adaptation of Daniel Wallace’s magical novel Big Fish.

Minghella, best known for his stirring and emotional direction and screenwriting of The English Patient, which garnered nine Academy Awards in 1996, including Best Picture and Best Director, will be honored with the International Director Award. Cold Mountain, Minghella’s highly anticipated film based on Charles Frazier’s wildly successful novel, opened on Christmas Day and is already getting strong attention from Academy voters.

Meanwhile, Costner will receive the Career Achievement in the Art of Cinema Award for his work both in front of and behind the camera. “Kevin Costner is one of the few stars you can imagine in any decade of filmmaking,” Macdonald says. Of particular interest to the local community, Macdonald says, are Costner’s ties to Native Americans and their continued plight. “He gives his name and reputation to a cause no one else in the industry seems to champion. In taking a public stance, he’s a true example of what a star can do for an issue.”

It was a long road for Costner, from the unbilled — and largely unseen — corpse in The Big Chill to starring roles in such blockbuster hits as No Way Out, Field of Dreams, Bull Durham, and The Bodyguard. But it was his bravura turn in Dances with Wolves that cemented his place in film history: he produced, directed, and starred in the picture, which earned seven Academy Awards, including Best Picture and Best Director, and a place in the American Film Institute’s list of the Top 100 films of all-time for his freshman effort.

In addition to receiving his award, Costner intends to teach a Master Class in filmmaking on Jan. 12 — an opportunity for aspiring filmmakers that Program Director Carl Spence says is only one of many surprises in the festival’s schedule. “We’re building on the success of previous years,” Spence says, while also fine-tuning what has worked previously. What that means this year, with Oscar balloting beginning on Jan. 17, is more gala screenings, more private viewings, and a continued effort to highlight both the up-and-coming (the New Visions/New Voices tract is always a must-see) and the already established.

With the increased involvement of the city, Palm Springs International Film Festival also looks to become a centerpiece for tourism — a veritable 12-day advertisement for the pleasures of the desert. It’s a proposition Sonny Bono would have appreciated and one Macdonald hopes will come to fruition. Nearly 75,000 people attended last year’s event without the advance attention of Entertainment Tonight and the star power of Kevin Costner, so Macdonald has every right to be hopeful that this year will be even more successful.

Film Festival Chairman-elect Earl Greenburg thinks this attitude toward promotion will make the festival more than a two-week affair — an event that taps lives here year-round. “There are so many people and resources here,” he says, “that by making the festival more inclusive only makes sense.” Greenburg wants the festival to be considered a filmgoers event, meaning equal parts fine films and fine programming should translate into higher attendance and a larger measure of self-sustainability, an end goal Greenburg believes to be of paramount importance. The lineup of names Greenburg has attracted this year — ones with the rare mixture of both celebrity and unparalleled artistic quality — should go a long way toward reaching that ambition.

Michael Green, board member of Palm Springs Hotel & Hospitality Association and president of the Desert Gay Tourism Guild, sees only positives when looking at this year’s festival. “It’s an incredible local event that has become an incredible national event,” he says. And if the festival continues to court tourism, Green thinks it’s only natural that tourism will court the festival, which means better attendance, bigger stars, and even more renown for a film festival that, at 15 years old, seems to have already grown up.