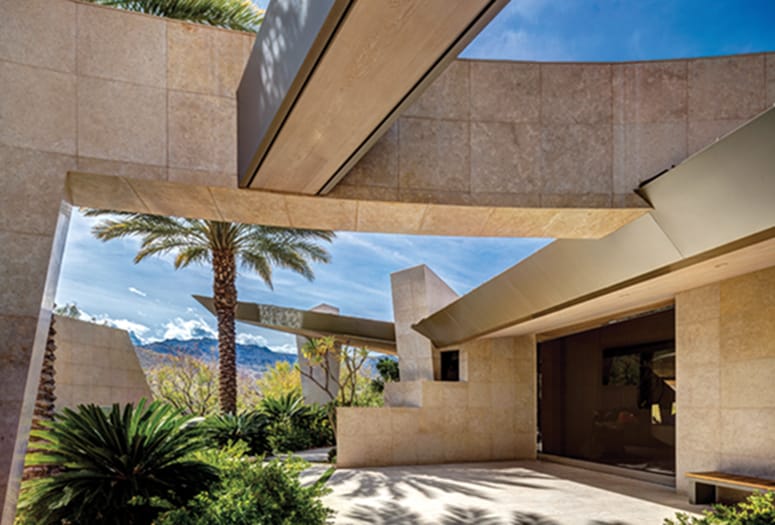 The composition of this Bighorn Golf Club home’s exterior angles frames a tranquil vista of the mountains beyond.
PHOTOGRAPHS BY DAVID BLANK

How do you build a residence whose contemporary design, soaring interiors, and meticulous craftsmanship captivate at every turn? You collaborate, of course. Uniting masterful design with modern engineering and sophisticated building processes, a legacy of construction and collaboration helped bring to life this Bighorn Golf Club residence; It’s designed by Guy Dreier and built by Stoker Construction Inc.

The home, with its sublime angles and expansive spaces, is a consummate state-of-the-art Dreier vision. “Our main intent was to create strong indigenous architectural sculpture that would be a joy to live in,” he explains. “We sought to create defined, open, and warm interior environments within the architecture that you never want to leave.”

Mission accomplished. Stoker’s core team of partners and colleagues includes three generations of family and has worked with Dreier for two decades. Like the Stoker family, Dreier’s skill and passion seem to be as much in his DNA as in his profession. He carries on his family’s renown as the son of eminent Swiss architect Eduard Dreier.

The Stokers recall how, in the early days of their partnership, Dreier conceived amazing 3D models after which they patterned their building techniques, often “figuring it out in the field.” This was before CAD drawings were the norm. In fact, architects’ drawings and detail sheets still use construction methodologies the family pioneered. And therein lies the essence of building innovation: transforming ideas into tangible structures. 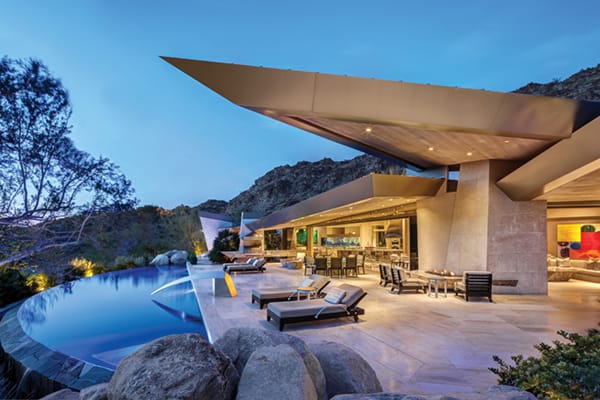 A fire pit provides light and heat, complementing an intimate seating area next to the residence. 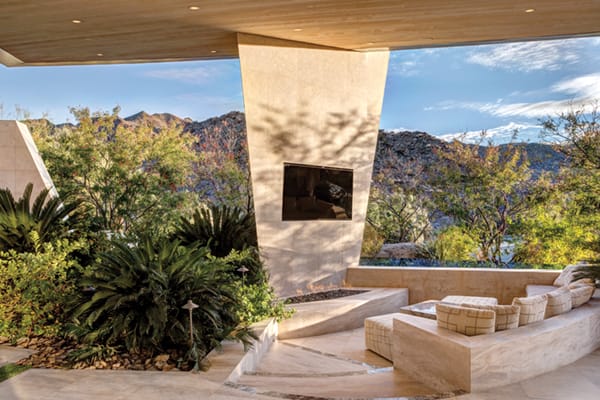 Architectural lines and geometric shapes are juxtaposed with the warmth and inviting surfaces found throughout the home’s interior.

Chad Hawkins, who managed the Bighorn project with his father, Don, addresses the need for continual change. “Our goal is to maintain our quality and reputation as we move into new technologies,” he says. “We’re serving a younger generation of clients” — a milestone considering the company’s humble beginnings in 1975.

What is now a time-honored business started with family patriarch Warren Stoker, a contractor who made his way from Los Angeles to Yucca Valley 45 years ago. The elder Stoker’s cousin Don (Chad’s father), a journeyman carpenter, joined him in a partnership with Warren’s intuitive vision: “The only way this will work is if we start a framing company.”

And work it did. The company’s first job as a general contractor was in Tamarisk Country Club. “Everything mushroomed from there,” Warren recalls.

“He was brilliant,” Warren says, explaining that the firm’s alliance with Chase advanced their young business. “He could do anything.” The Stoker team has not only worked for many of the celebrated designer’s clients but also remodeled Chase’s personal residence several times.

But then, this is no ordinary construction company. The Stokers’ foundational belief in doing things right — in maintaining a powerful work ethic and practicing the highest standards — has set a benchmark for the industry since the beginning. 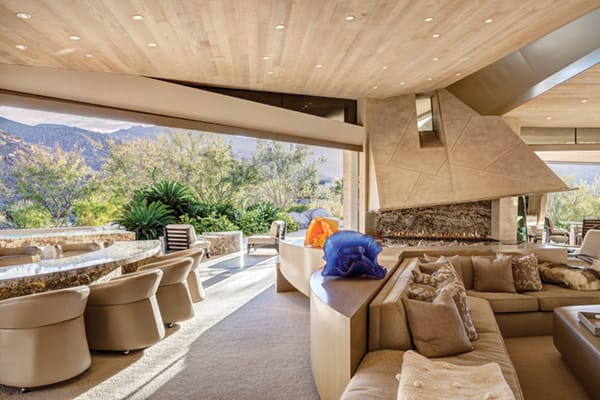 The seamless fusion of indoors and out creates an environment that invites
exploration as well as entertaining. From the vantage point of the main living area,
one can see clerestory windows in three shapes.

Today, Stoker Construction’s work is visible in the Coachella Valley’s most prestigious private clubs, and the family’s third generation thrives on making its contribution.

Dreier can attest to that on this recent Bighorn endeavor. “The project was especially gratifying because we had the opportunity
to work with Chad as the superintendent and his father at the helm,” he says. “It gave the project a very special, generational experience for everyone.”

Along with cousin Chad, Travis and Clint Stoker — whose father, Mark, is Warren’s son — are keeping the tradition of craftsmanship alive and well. “With custom homes, you’re constantly doing something that’s never been done,” says Travis, who began as a draftsman. “So you’re reverse-engineering and refining things to ensure they are done correctly.”

Clint agrees. “We work between all the parties, striving to honor the wishes of the architect, designer, and owner, all while bringing in the project on budget.” Luxury custom homes tend to present challenges on a grand scale, yet the team’s ability to reconcile vision with inherent structural realities is singular. And though, as Clint notes, “construction is getting more complicated,” the firm seems to make the impossible happen.

As a company defined by its enduring affiliations, says Warren of his many clients, “It’s like a marriage. You’ve got to have trust.” The firm’s respect and mutual admiration for everyone in its universe  — family, architects, subcontractors, and clients — set it apart.

Integrity is more than a noble virtue; it’s the cornerstone of the business. The Stokers see themselves as much stewards as builders. They’ve helped build places of worship throughout the west and rebuild properties in Puerto Rico after Hurricane Maria. They also maintain homes they built decades ago. Clients tell their children and grandchildren, “If you need anything, call Stoker Construction.” Always, the family answers the call. And the legacy continues. 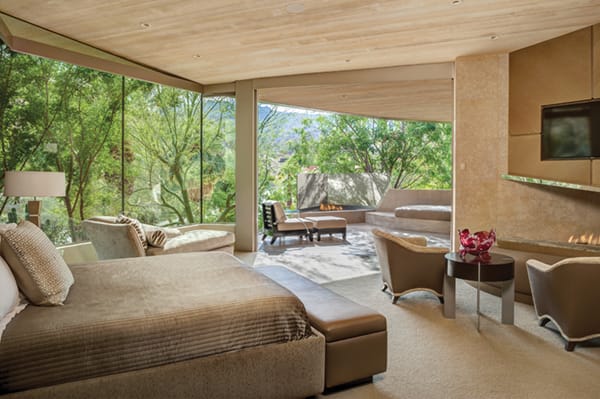 Both lounging area and a place to slumber, the guesthouse offers the ultimate retreat for privacy and renewal. 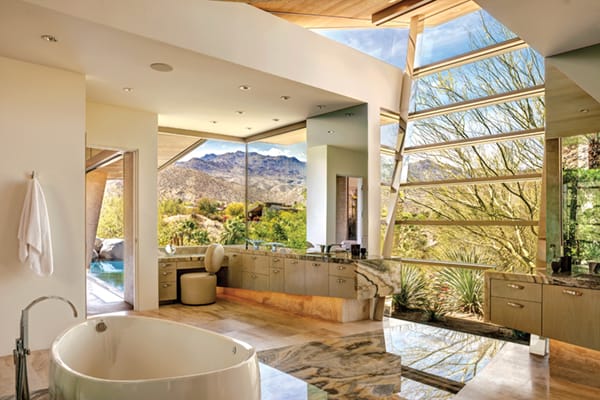 The elegant master bath feels even more expansive with the beauty of its natural surroundings.