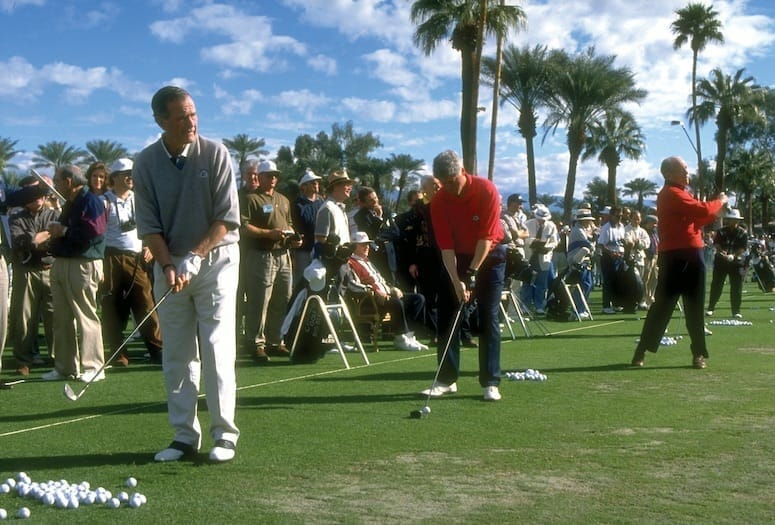 It was a few hours before the opening tee shots would be hit in the annual Bob Hope desert golf tournament, and all the president’s men were scurrying around.

The night before, dogs were unleashed in the neighborhood to sniff trash cans for explosives. Now, men with earplugs, sunglasses, and government-issued windbreakers with “Secret Service” on the back, poured out of a caravan of big black cars, looking right and left, up and down. Later, many would be drive in golf carts alongside the group scheduled to tee off on No. 10 at Indian Wells Country Club. Others would be assigned to tougher duty, such as climbing the mountain alongside No. 18 and keeping their sniper rifles poised and ready. Several more would ride in, and around, the cart that carried the “football,” the device that held the codes to trigger a nuclear response in case of attack. It was a device never allowed to stray far from the one person allowed to push the button.

“Eagle,” their code name for President Bill Clinton, remained in one of the big black cars as his men checked the surroundings and secured the way.

John Foster, longtime executive of the Desert Charities group that helped run the tournament and also benefited from its revenues, recalls watching the activity with fascination. “I remember thinking how lonely being president must be sometimes,” he says. “[Clinton] had to sit there in the car for three minutes or so. Just sit there.”

The president would not be allowed to enter through the front door of the Indian Wells Country Club. It was determined that he’d be ushered through the shoeshine area, and so he was. Once in, many sets of sunglasses zeroed in on the shoeshine boys as Clinton walked through the space and to the locker room, where he could go from solitary man to presidential. He shook lots of hands, patted lots of backs, put on his golf shoes, and headed out to the driving range. 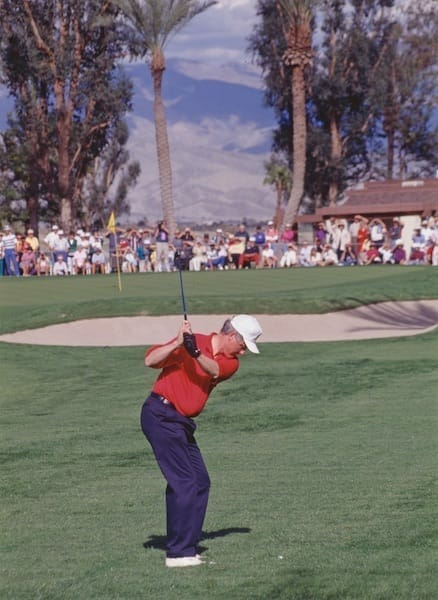 Bill Clinton says he tried to avoid politics by not hitting too far left or right.

“He worked the practice area perfectly — lots of pressing of flesh,” Foster says. “He started north to south, then went west to east.”

This was Wednesday morning, Feb. 15, 1995. The golf tournament was still living under the specter of the desert’s greatest public relations symbol, comedian Bob Hope. It has since changed names about as often as a parent changes a two-month-old’s diapers, but this iteration was the Bob Hope Chrysler Classic. These were the salad days of the event. It had, as its identification, a corporate, check-writing sponsor and one of the world’s most famous, generous, and beloved human beings. Now, the event is called The American Express, which certainly brings more financial love, but perhaps less of the Hope warm-and-fuzzy image.

Foster remembers being grateful that his tournament did not have to pay for this Secret Service invasion. “What a cost to taxpayers,” he recalls thinking.

Already, a crowd estimated at almost 25,000 was gathering. The tournament was played at multiple courses, and longtime La Quinta resident Peter Murphy, who would play in the pro-am portion of the tournament for 17 years and was headed to another course that morning, remembers one thing vividly: “There were huge traffic jams,” he says.

This wasn’t only about Clinton, who was the sitting president. Joining him for the 18 holes that first day were former presidents George H.W. Bush and Gerald Ford. Clinton was 48, Bush was 70, and Ford was 81. To have three presidents agree to play a round of golf in a real PGA event was a story, a huge deal for the Coachella Valley. Organizers knew what sort of attention this would attract, so, for that first tee-off, they put up an additional media bleacher about 60 yards down on the right side of the 10th fairway.

Larry Bohannon of The Desert Sun — who has been for decades, and remains, the dean of golf writers in the area — walked down to the bleachers before the first presidential swing. He found Washington, D.C., press corps types. They were grizzled veterans who looked more ready to cover a war than a golf tournament, all with notebooks at the ready.

Foster says the gathering was put together by California state politicians, and adds that it wasn’t totally unprecedented, that other politicians, such as Tip O’Neill, had previously played in the pro-am potion of the event. The original idea was that the three presidents should play with Arnold Palmer. They could brand it as “Three Presidents and the King.”

But the PGA Tour and tournament officials decided they should play with the reigning Bob Hope champion, and that was Scott Hoch, who said in a Golf Channel interview 20 years later that when he heard, he decided to “just roll with the punches.” He also said that his friends immediately advised him “not to stand too close to the sitting president.” Palmer was placed in the group directly in front of the presidents. That worked nicely, with plenty of time for schmoozing on the tees. It also set up nicely for later in the tournament. The tee-off on No. 10 at Indian Wells, the easiest course in the rotation, established that those same players would be in afternoon golf prime time on Saturday. They would have Palmer for the telecast. 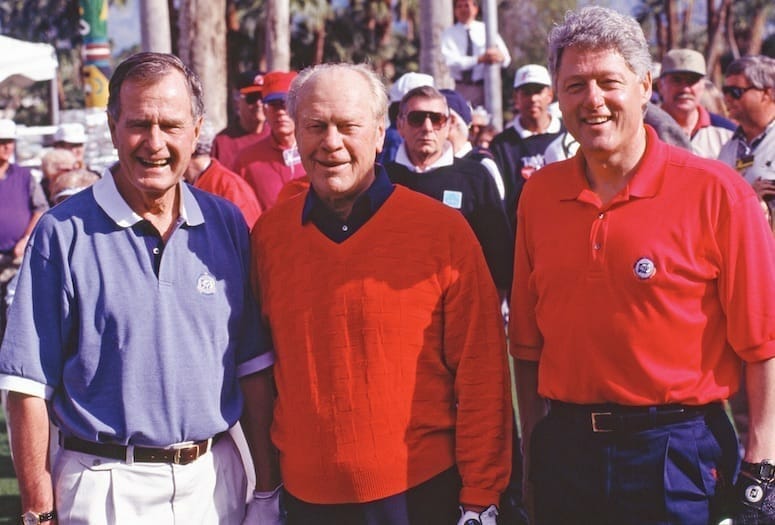 The presidential pro-am with George H.W. Bush (the winner), Gerald Ford, and Bill Clinton was made for TV.

This presidential hackers’ circus did not play well with all. Bush hated slow play, and their round ended up taking about six hours. Hoch recalled in his TV interview that Tom Kite, playing in the group directly behind, laid down in the fairway to rest as he waited.

None of the three presidents would prompt Golf Digest to hire them for a swing photo shoot. Besides Hoch, the best ball-striker in the group was Hope, who at 91, was about to play his last full 18 holes of golf.  The three presidents — and Hoch, of course — walked. Hope rode in a cart. As the story goes, a few tournament officials, fearing health issues, tried to entice Hope off the course after about five holes, with offers of taking him to a nearby ice cream concession stand. Hope loved ice cream. But his response was that, if the presidents were going to go 18, so was he.

The anticipation of those first presidential swings brought some great lines. Clinton said, “We were all nervous as cats.”  He also said that his intention was to avoid political golf. “I will try to hit it not too far left and not too far right.”

Ford, infamous for errant tee shots that occasionally drew blood among spectators, recommended that the entire gallery “stay behind us all the way round.”

Hope, an especially close acquaintance to the 38th president, quipped, “They have 57 courses down here, and [Ford] doesn’t know which one he will play until after he hits his first tee shot.”

Hoch joked, “When they hit it into the crowd, they always ended up with good lies.”

There was the inevitable bloodletting. A woman had a cut nose, a man got hit hard on the leg. But the round was completed, with Hoch shooting a legitimate two-under-par 70. The other scores may have raised an eyebrow or two, but no rules officials were summoned to the scoring tent. Ford shot 100, Clinton was at 93, and Bush, the “winner” did 92. Hope made it all the way around and gave new meaning to the term “mulligan.”

Foster remembers the day fondly, recalling that it was Bush who Clinton beat in the presidential election three years earlier. “They were all delightful,” he says.

Hoch, with the full knowledge that all the hoopla probably cost him three or four strokes, still looked back on it fondly years later in his TV interview. “They told stories that cannot be repeated,” he said.

In the end, they all had a good time, except for maybe the Secret Service snipers in the mountains and the guard dogs assigned to the garbage cans.