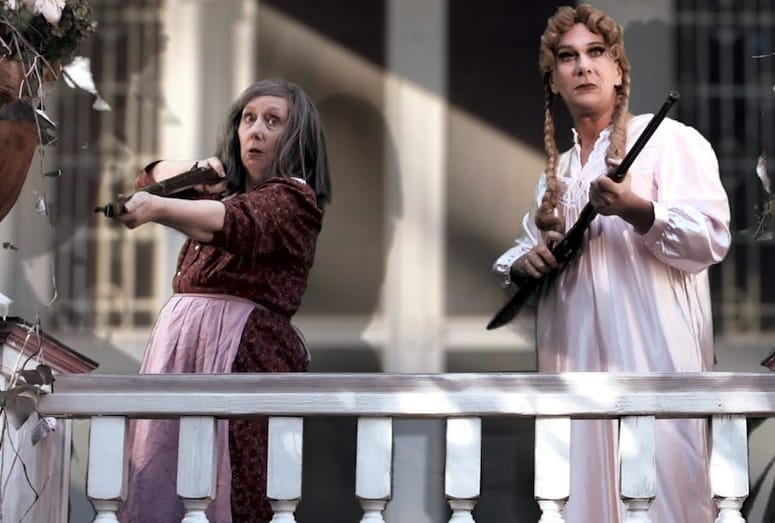 Don’t be surprised when the picture begins to darken.

That’s exactly the way director Billy Clift wants you to view his latest film, Hush Up Sweet Charlotte, a remake of the Bette Davis-Olivia de Havilland classic, Hush…Hush, Sweet Charlotte made in 1964.

“I took Charlotte a little darker than the original, that is my take on these when I'm re-imagining these films, is I try to, in a way, update them to make them a little darker, a little more psychological, more stuff going on,” Clift says. “And at the same time, of course, have my comedic one-liners. But it's also dark. This film's very dark.” Director Billy Clift remembers being enamored with Bette Davis films as a kid.

Clift’s film will headline Cinema Diverse, The Palm Springs LBGTQ Film Festival, during its Sept. 17-20 run at Camelot Theatres in Palm Springs. The premiere is set for 8 p.m. Sept, 19. This will mark his third film at the festival – the second remake of vintage Davis (the other was Baby Jane from Whatever Happened to Baby Jane).

Clift, who recently moved from San Francisco to Los Angeles, spoke to PalmSpringsLife.com about the film, his growth as a filmmaker, and his next project.

Is there a connection with the two films? I mean, are you kind of fascinated with Bette Davis?

“I think like every young, gay man who grew up watching old Bette Davis films (laughter). There was one in the afternoon I think in almost every city where you could come home after school and it would be on. The Million Dollar Movie, or something like that? And I would just sit there and watch every black and white film — a lot of them were Bette Davis films or Joan Crawford. And I don't know what it is about … Well, I do know what it is about, you identify with these strong women and they have one-liners, and we love one-liners. You know?”

What is it about this particular film that audiences will find appealing?

“The people of Palm Springs, like myself, grew up on this type of stuff. So you really relate to it, we say these one-liners when we walk into a room. Personally I don't think the original film was as good as Whatever Happened to Baby Jane, but it has a lot of amazing moments and I'm hoping that people will feel that my film is actually more. There are a lot of holes, and I try to fill in all the gaps in my film of what the cousin has been doing all these years. I created all these back stories. So, yes, I think our audience, especially in Palm Springs, is really going to eat this up. I hope they do.”

HUSH UP SWEET CHARLOTTE – TRAILER from Billy Clift on Vimeo.

You didn’t plan to be a filmmaker, did you?

“I was a hair and make-up artist in Hollywood. I was Elizabeth Montgomery's hair and makeup artist until she died in 1995. After that happened it actually devastated my life, and I even wrote a book about how it affected me (Everything's Going To Be Just Fine). I wrote the book for myself; I didn't care if anybody read it. And it was so funny when it really came to me, something that I'd been suppressing and that I'd often wanted and would always say it and then I would cut myself down saying, ‘No you can't do that!’ Which too many amazing people do that. And I finally went, ‘No, you've gotta do it and you don't want to go out of this world with any kind of regrets.’ ”

What was the inspiration to make that leap?

“I was actually trying to make a feature of the book. I was moving along really well and the economy went south and the financing just fell apart. And I stood there and I wasn't upset. I just said, ‘You know? What could I do with practically no money, that I could just jump right into, shoot it and put it out?’ And I immediately thought of this silly idea that I had after I had seen Matthew Martin on stage doing Christmas With The Crawfords. He played the Baby Jane character. It was the first time I'd ever seen a Bette Davis impersonator not overdo it. He did it real. And I was like, ‘Wow. That's perfect for film.’ ” (From left) Matthew Martin as Charlotte, Jason Stuart as Mr. Wills, Heklina as Mrs. Bates and Jeffrey Roberson as Melanie in a scene from Hush Up Sweet Charlotte.

I read you are pursuing a film on Montgomery Clift, who was your second cousin?

“Yes. It's something that the family has always wanted to do. Because he is someone who was an important actor during the 20th century and nobody knew really who he is today. And they always say how tragic he was and yes, that was part of his aspect but I also want to show so many other sides of whom he was. And also show how important of an actor he was in the 1950s and ‘60s and how he changed acting, the style of acting. He, James Dean, and Marlon Brando.”

Did you ever meet him?

“I never met Monty; I was too young. But his brother who lived here in Los Angeles used to come for Thanksgiving and Christmas. He used to tell stories and then he told a lot more stories that I didn't even know about at my age to my sister, so my sister has been able to fill me in now that I'm writing the feature. So I've got some interesting tidbits that were never really known. A lot of it is in all the books, but there's a few bits that I'll be able to pull out that people wouldn't know.”