Billy Van Zandt (left) and Jeff Babey are two of the quartet that perform in The Boomer Boys Musical.
PHOTOGRAPHS COURTESY THE BOOMER BOYS MUSICAL

Billy Van Zandt likes to play his own version, of “Mirror, Mirror, on the Wall.”

He even wrote a song about it with Jane Milmore, “What the Mirror Doesn’t Show,” that is part of The Boomer Boys Musical coming Feb. 11-13 to the Palm Springs Cultural Center.

The song emerged after their composer, Wayland Pickard, suggested a musical show on the changes older men experience. “It's about how when you look in the mirror, and you don't recognize the person looking back at you anymore, because you still feel like you're 35 years old,” Van Zandt says. “That's one of my favorite songs in the show. Then we sing about how we're turning into our fathers and saying things we never thought we'd say that they said, and all that those things. We ultimately come to the conclusion that you're never be younger than you are today, so you might as well enjoy yourself while you can.”

The songs continue to take the audience through a malady of male issues, such as “My Prostate is the Size of a Buick”, “I Just Took a Pill Called Viagra”, “Brain Fart”, and a rap song about a colonoscopy.

While the show focuses on men, Van Zandt says the show has resonated with women. “They come and laugh so hard at their husbands, it’s really fun,” he says. “The younger people come and laugh at their parents. Halfway through the show it happens that they realize we are talking about their future, and then they are just horrified by it.”

Van Zandt, who will be joined on stage by Tom Frascatore, Glenn Jones, and Jeff Babey, chats more with Palm Springs Life. 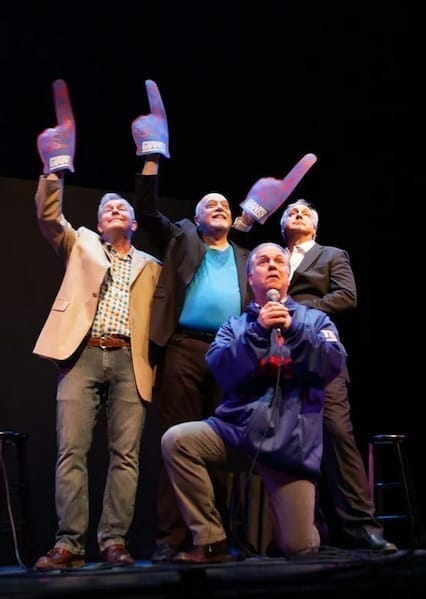 (From left in the back) Glenn Jones, Tom Frascatore, Billy Van Zandt, and Jeff Babey in front.

What was the inspiration for this musical? What convinced you it could work as a musical versus a play?

It had to be a musical because that's all we were ever intending it to be. It's done Rat Pack style, four friends and four microphones, joking, singing, and dancing about all the stuff that life is throwing at guys our age. It's a very loose format. Half the time I have no idea what’s happening. They'll be throwing in a couple of jokes, they'll throw in new stories, or new details in their stories. We have as good a time as the audience does.

No, it's the same show. We based this show on a Time Magazine cover called Man-o-pause. Some other people who think they own the words actually started suing us. So, we said, "It's not worth it, let's just change the title." We did the show Off-Broadway at the Triad in New York. Then we toured for about two years and I'm happy to say we sold out every show we ever did. Then the pandemic hit, and everything stopped. These shows in Palm Springs will be the first off what's going to be a lifelong tour hopefully.

What do you believe resonates with audiences about “Boomer Boys”?

I can't tell you how much of this resonates with people, because people stop us after the show, mostly it's women who stop us after the show and say, "Oh my God, this is exactly what my husband talks about all the time." I would say a lot of it has to do with physicality. Mostly, I think they also identify with the friendship between the four guys, because we're always ragging on each other and we have a good time with that.

I go down there and play golf with my kids all the time. My wife recently saw a show called Viagra Falls, with Bernie Kopell. We love it there. We were just there for Dionne Warwick's Walk of Stars ceremony in December. And I'd love the show to become a yearly staple in Palm Springs. That would be great! 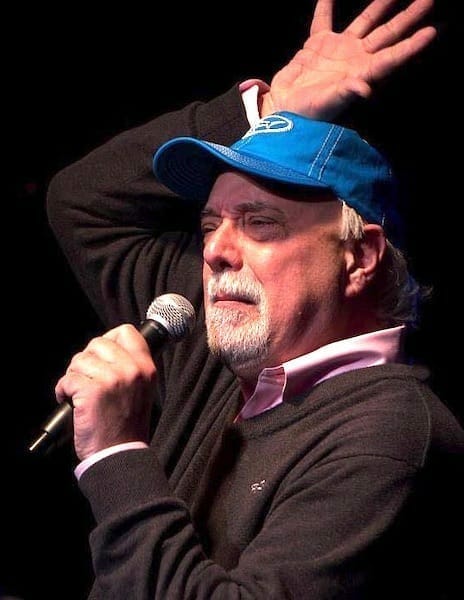 Tom Frascatore shares his pain during a song in The Boomer Boys Musical.

When you are mentioned in stories, they sometimes include that you are the half-brother of Steven Van Zandt (The Sopranos). When you were establishing yourself, what did you want people to know about you?

It's funny because, until recently, half the people who follow him have no idea I'm around, and a lot of people who follow me were like, "That's your brother?" We've always gone our own way but we always support each other. My biggest influencer was Lucille Ball. That's the reason I got into show business, and I wanted to do that sort of comedy. Mostly, that kind of comedy is what I've been known for. I'm more than happy to do that, because they were the best. Lucy and Desi taught me everything.

You published a memoir in 2020 (Get in the Car, Jane: Adventures in the TV Wasteland). What stories do you have about Frank Sinatra or Lucille Ball, who lived out here?

The book is a memoir of all the TV shows Jane Milmore and I wrote. Every chapter is a different TV show. I kept journals. I've never kept journals since then, I never kept journals before, but when I was writing for television I kept journals on all the shows that I worked on. There is a story on Frank Sinatra. The last sitcom he ever guest-starred on was our show, Daddy Dearest, with Don Rickles. That's a fun story, because it's so crazy. He agreed to do the show, but only if he felt like it on a day he woke up and felt like doing the show on that day.

We accommodated it. We built a set and we had to sit there until he was ready to do the show. Then we got a phone call in the morning saying, "He's coming," and everybody ran to the stage and set up. That was fun.

The first chapter of my book is all about my influence with Lucille Ball and getting to finally work with her on Life With Lucy. Jane and I discovered the I Love Lucy pilot episode that no one had seen for 40 years. We put that into a TV special, and it was coincidentally a year after Lucille had passed away. I didn't want to bother Lucie Arnaz even though I wanted her to host the show. We were careful to respect her privacy and all that. All of a sudden, we got a phone call one day from Lucie saying that she had read the script for it, because she had to approve images of her parents. Once she realized we were paying such tribute to her father, who has influenced every sitcom that's ever existed, she wanted to host the show. She  came in and did it for us, and she was lovely.

What else are you working on right now that people may be able to catch via streaming or on TV?

This came out of the blue and I can't talk about it in detail, but I am doing a cameo on The Marvelous Mrs. Maisel ,which comes out this month. Which was really fun. The people there were great.  And I just did a Nickelodeon show called That Girl Laylay. That's streaming on Netflix right now. I am also working on another book that will be out probably by the end of the year.