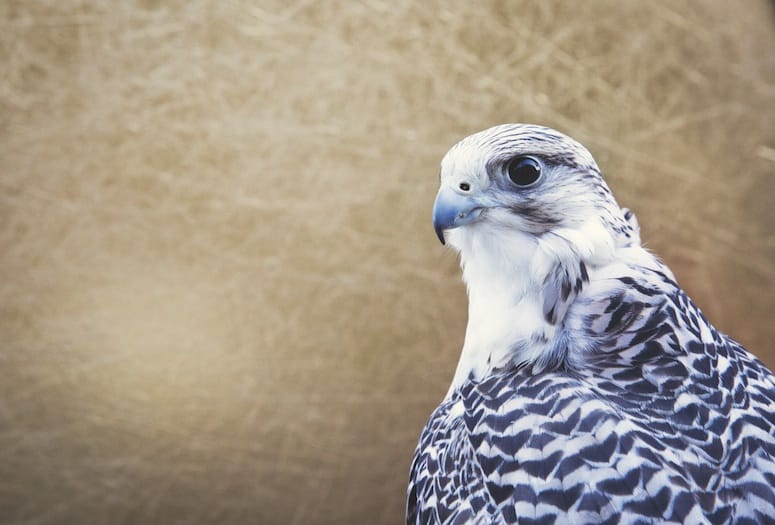 Big Guy, a gyrfalcon, suffered career-ending injuries after a confrontation with a golden eagle.
Photography by Jaime Kowal

The newest staff member of Winged Solutions, a pest control company, is a winsome, delicate creature with a face so pretty you wonder if she missed her true calling. But looks can be deceiving.

Ariel kills for a living.

Or she would if her boss, company owner Ken Miknuk, would let her. On meeting, you wouldn’t know that she’s lethal, you would know only that she’s beautiful, and that she’s a bird. Specifically, a kestrel. Ariel and her colleagues are all raptors, birds of prey, whom Miknuk employs to dissuade other nuisance birds from infesting residential complexes, and golf facilities. Their job is to prevent unwelcome avian intruders from fouling the pool deck, or lurking over your shoulder on the patio rail, waiting for you to drop a french fry off your lunch plate.

The hawks, falcons, and kestrels don’t kill the Brewer’s blackbirds and wedge-tailed grackles in their sights; few things would be more off-putting to a resort guest taking a dip in the spa and than to witness a hawk eviscerating a trespassing sparrow. The Hyatt Regency in Indian Wells, for example, relies on the raptors’ fear factor; they scare pests away simply by inhabiting the space. Miknuk, a master falconer, uses the laws of nature to adjudicate conflicts over who is welcome to the club, and who isn’t. Ariel, a kestrel, was a rescue bird who fell from her nest.

The collective resumes of the Winged Solutions staff make this enterprise anything but business as usual.

As a kestrel, Ariel is the smallest falcon in North America, and one of the most common. They’re everywhere, but you probably don’t notice. If you happen to see a line of birds bunched closely on a telephone wire and widely separated from a single bird, the loner might just be a kestrel, surveying the landscape for insects, mice, and sparrows. Ariel, whom Miknuk describes as “precocious,” joined his crew after he found her as a tiny tyke under a palm tree at the JW Marriott in Palm Desert. She had dropped some 50 feet out of the nest.

“Ten minutes later,” Miknuk says of the rescue, “and she would have been gone.” Ravens were eating her siblings.

Although he’s a businessman with a degree in mechanical engineering who long made his living in figuring out how to move commodities around the planet, Miknuk has been enamored of falconry since he was 9. At 16, he received his apprentice falconer’s license from what’s now the California Fish and Wildlife Department, and at 20 achieved master falconer status. He also holds two permits provided by the U.S. Fish and Wildlife Service, one to perform pest abatement by raptor, and one to use the powerful birds in educational programs. Three generations of Miknuks are involved in the enterprise; son Jason works for Winged Solutions, and Miknuk proudly notes that last year, his 12-year-old grandson, Ethan, scored 100 percent on the apprentice licensing test. “He’s afflicted with the disease,” Miknuk notes, and smiles.

Ozzy Osbourne is another worker on Winged Solutions’ payroll, one of the feathered employees who are remunerated mostly in quail parts, although Ariel also gets mice (each bird consumes 10 percent of its weight daily). Ozzy, an 8-year-old Harris hawk, is named for what Miknuk says are the bird’s mental insufficiencies. But, as with all of his birds, Miknuk’s love for Ozzy is clear; he has a passion for them as individuals as well as predacious bio-flying machines.

In his youth, Ozzy suffered from rickets and malnutrition, and, at 1.2 pounds, is small for his species. He’s also, claims Miknuk, “a narcissist.” Harris hawks in general, according to Miknuk, are the most gregarious birds of prey. “They changed the face of falconry in the United States,” he says, because their relatively good natures enabled more humans to participate in the sport.

Trailing his jesses — strips of leather affixed to the leg that enable the falconer to control the bird perched on his gloved arm — Ozzy flies about 50 mph over lawns, pools, and manicured gardens. Like all raptors, he has keen eyesight, but he’s no match for the larger falcons who can see the individual letters in a newspaper story from a mile away. They are multiphoric (their eyes can focus independent of each other), and are capable of wide–angle and telephoto vision. In some falcons, one eyeball weighs more than their entire brain; they’re skilled hunters not so much from cunning as from visual acuity. Ken Miknuk fixes a transmitter to Ozzy’s tail feather. Should an employee go fly-about, Miknuk can follow the signal to reclaim the vagabond.

Raptors have two more vertebrae than humans, which enables them to rotate their heads 190 degrees. They need this flexibility because their eyes are so big that they have no peripheral vision — their eyes don’t move well side to side, but their necks do. Think owls, another bird of prey Miknuk has used to wow kids in the school programs he conducts.

“Falcons,” Miknuk summarizes, “are the Lamborghinis of the bird world. They’re an F-22 raptor.”

The shape of fighter jet wings replicates those of a falcon — nature designed a peregrine falcon to be able to dive 200 mph in order to catch its prey on the wing, and mankind was smart enough to follow its lead.

In bird abatement, different predators are suitable for different environments. Asking a peregrine to sail among the dense trees lining a walkway is folly, like “flying a jet in a football stadium,” Miknuk once said. That’s a job for, say, Ozzy. Hector, a peregrine who was not on rounds this day, is better suited to the open expanse of a par 5 golf fairway plagued with an abundance of the Canada geese and pigeons that foul water features and can cause outbreaks of giardia.

As Miknuk puts his birds through their paces — each of his nine workers flies every day, although not always on the job — the careful observer notices the tiny appurtenance affixed to a center tail feather. It’s a transmitter, and each bird has a different frequency, enabling Miknuk to receive the signals that tell him where someone has gone if he loses one of his workers. That almost never happens, but in 2014, Big Guy, a gyrfalcon, went missing during a bird abatement assignment at the Marriott Renaissance in Indian Wells. Despite his impressive physique (gyrfalcons are the largest of the species), Big Guy, Miknuk says, is kind of a wuss; a red tail hawk ran him off the property, and Miknuk didn’t find him until two days later … sulking at the Salton Sea.

In January, Big Guy had an even more harrowing adventure, one that ended his career. He was scaring off some particularly aggressive Canada geese at the Westin Mission Hills in Rancho Mirage when he started acting hinky, as if a threat were nearby. He took off, and Miknuk followed the signal to a nearby house. He climbed onto the roof, where he found the bird’s tail mount and transmitter, but not the bird. He filed an MIA report with rescue organizations and animal control that included Big Guy’s band number, and eventually got a call from a bird of prey rehab center in Indio. A woman had found a severely injured Big Guy about a mile from the Westin, and called Riverside animal control. It dispatched him to the rehabbers, who diagnosed two spiral ulna fractures and deep talon marks that Miknuk, in self-described “mechanical engineer failure analysis,” identified as inflicted by a golden eagle. Tools of the raptor trade.

“He’ll never fly again,” Miknuk says, noting that the eagle must have been soaring high above the Westin, out of his sight, but not Big Guy’s.

As Ariel’s near-death at birth experience also attests, life is volatile in Raptor World. In weirdly pastoral contrast, Miknuk winds around the serene path at the Hyatt villas with Ariel perched on his arm. Suddenly his eyes narrow, and his attention wanders away from conversation. “She’s nervous,” he says, studying his bird. “There’s another bird nearby.” He could unleash Rusty, the rescue dog that always accompanies him on his morning resort routine, he could shine his laser pointer around the trees to scare off whoever is bothering Ariel, but he just puts her back in her carrier. Moments later, a Cooper’s hawk zooms out of a palm tree, flies away, and man and bird get back to business.

In the desert, resort bird abatement peaks in the cooler months, and by the time spring arrives, business is conducted at a leisurely pace. Although resort guests often are charmed by the work done on their behalf by Miknuk’s birds, raptors have long been used for vermin control in other applications that escape most people’s notice. On Catalina Island, gulls fouled the beach so badly that authorities had to close it and Miknuk and Winged Solutions considered taking on the gig. Airports, whose runways can be cluttered with flocks of birds, are the raptors’ most common employers. “There are 22,000 airstrikes annually,” Miknuk says. “When birds hit an airplane, no one wins.”

In bird abatement, different predators are suitable for different environments. a peregrine is better suited to the open expanse of a par 5 golf fairway plagued with an abundance of Canada Geese.

The second most common use of the birds is to address a health issue. Landfill operators use raptors to scare off the gulls, whose bodily secretions contaminate the environment. Agribusiness is a big bird supporter, and until recently, Miknuk’s birds flew over cropland in the hopes of controlling shrinkage by the opportunistic linnets, finches, and horned larks who sample the fruit.

Winged Solutions no longer does the farm thing. It’s good money, better than what the business gets from resorts or homeowner associations, but Miknuk likes interacting with humans on these steady gigs, which doesn’t happen when he’s sitting in a trailer for eight weeks protecting somebody’s pinot grape vineyard. Plus, here, Miknuk notes during this morning session in Indian Wells, “I love the weather.”

So do the birds. Resort life, especially the outdoor part, Miknuk says, appeals to wedge-tailed grackles, who love alfresco dining and “like to jack the Splenda packets on the table.” In a lot of places, management has locked the containers of sugar because “It’s like crack to a grackle.”

Ariel and her colleagues are only too happy to break the addiction.