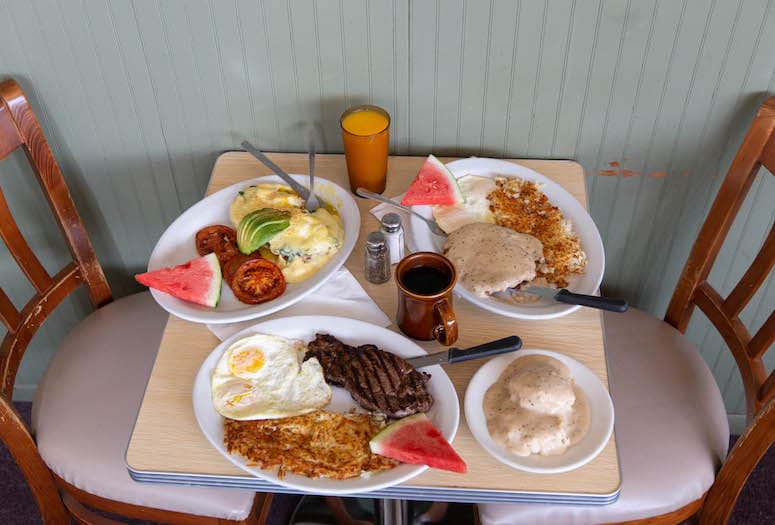 Three dishes to try: Eggs Benedict, Steak and Eggs with biscuits and gravy, and chicken fried steak and eggs.
PHOTOGRAPH BY COLBY TARSITANO

Years ago, when kitsch was the order of the day, Palm Springs issued a permit for the building of a new restaurant next to then Jilly’s, a popular hangout of the Rat Pack and owned by a friend of Frank Sinatra’s, Jilly Rizzo.

The new restaurant was called Hamburger Ding A Ling. The kitsch was a telephone on each table where you called the chef to place your order and then it was delivered to your table. When the fad died out, the restaurant was purchased and reimagined as a breakfast and lunch restaurant called Bit of Country, featuring “the best biscuits and gravy you’ll ever have”.

It was in the mid-to-late 1970s when Armando Hernandez, nicknamed Mambo, began working for Donna Hughes when she reimagined Hamburger Dina A Ling into Bit of Country. Mambo was 15 at the time, and a year later, when Hughes sold the place to Fred Dallas, he kept Mambo on. Mambo was originally a dishwasher, but the chef noticed how quickly he caught on to things and began training him as a cook. 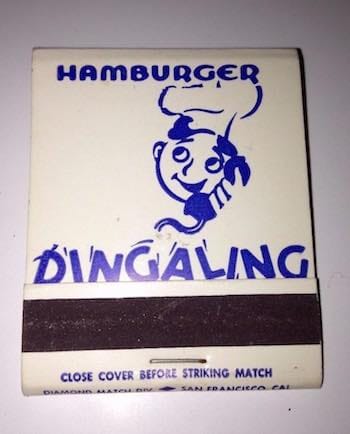 A few years down the road, Dallas decided to open another franchise in Yucaipa (now called Hickory Ranch Steakhouse) and sent for Mambo. After the new restaurant was up and running, Mambo went back to the Palm Springs location where he remained for 38 years.

Over the years, Dallas and Mambo’s bond grew tighter, and both came to think of each other as family. Mambo’s adult children, David and Armando Jr., also work with their dad at the restaurant. Last summer, Dallas called Mambo up to Yucaipa and asked Mambo if he would like to run Bit of Country. That seemed like a solid leap considering Mambo had put his life’s work into the restaurant. There is, however, a surprise ending to this story: Dallas gifted the restaurant to Mambo.

Mambo set to work implementing changes: he upgraded the kitchen, and the menu including Mexican dishes like tamales and eggs, switched the technique on a few classics to elevate the flavor, refreshed the inside, and painted over the old mural of a cow and chicken that was fading on the outside wall. 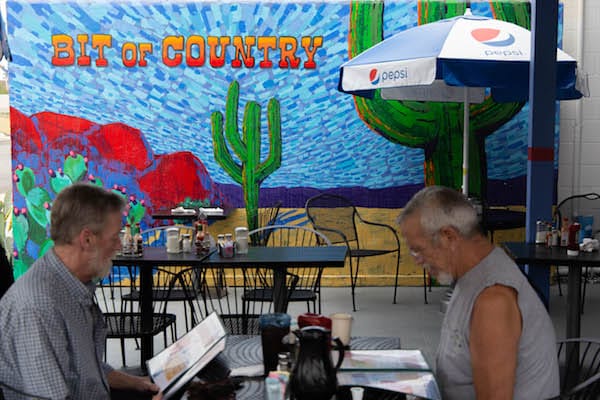 Bit of Country has indoor and outdoor seating with a mural in the background painted by customer and artist Joe Dietl.

Joe Dietl is one of those artist regulars who has being enjoying the food at Bit of Country for some time now. As the changes were being made, and the fading mural painted over in white, Dietl couldn’t help but envision a mural in keeping with the “new” restaurant. He asked for permission, and the answer was “We like you, let’s do it.”

“I drew up a few things and came up with an idea I liked, a lot like some of my other work with cactuses and a funky sky like I do,” says Dietl. “I presented it and they thought it looked great.” He began work on the mural, with the Bit of Country logo emblazoned in orange and red, and the final touch of a live cactus he planted in front of the mural to give it a 3-D effect. A celebration greeted the mural's unveiling on April 6.

Dietl is proud to have a part in the history of Bit of Country, not because his work is prominently on display, but for a higher, more altruistic reason, “Mambo’s a great guy with an amazing story. It’s so nice to see that there are rewards for good behaviors in the world.”

The last words we’ll leave to Mambo, who not only owns the restaurant, but is the guy in the kitchen who is proud to be cooking your food, “I want everyone to know that I am the new owner of this place and I want everyone to come and enjoy my food.”

Joe Dietl’s work can be found at Dietlart.com and at Brian Marki Fine Art Gallery.

A no fuss, no frills, cute homestyle diner with nothing but good breakfasts and lunches made with fresh ingredients. Whether you’re seated at the breakfast bar, or an indoor or outdoor table, service is good, and fast.

Prices: Pancakes start at 2.99. Priciest item is the ribeye steak and eggs.

Recommended dishes: Biscuits and gravy, any of the egg dishes, grits!

Parking: on the street or in lot that is shared with Wang's in the Desert.